Thomas ready to rack and reign! 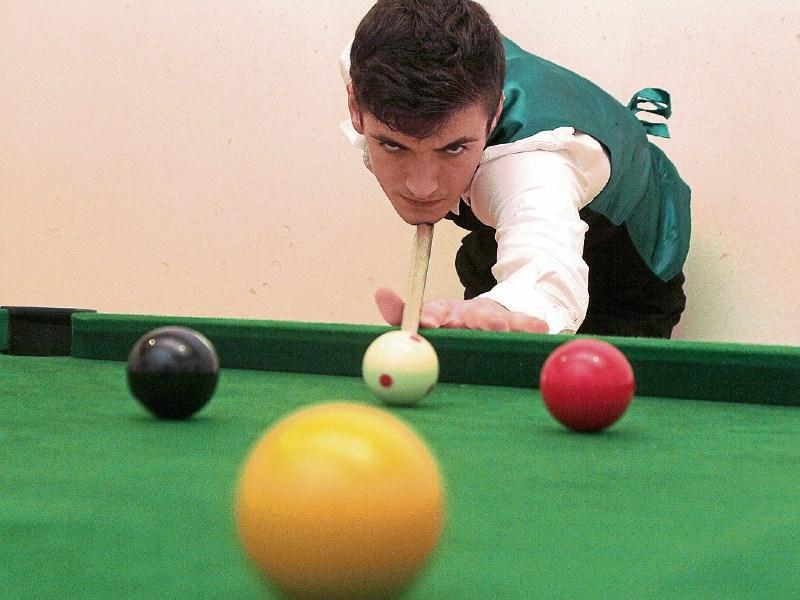 A Kilkenny teenager is hoping to pocket some international glory when he takes on Europe’s best in a major pool tournament.

Morgan Thomas will be part of the Irish junior team who will head to France in a few weeks determined to hold on to their title as the continent’s best.

The four-strong team, which includes the Kells teen, will be in action in Nantes next month for the Eightball Pool European championships. Some 450 players from 14 nations will compete for six days across seven team and six individual categories.

And Thomas is just itching to get there.

“I can’t wait to go,” he said. “I wish it was time to start playing already!”

Thomas found out he had made the initial Irish squad a few weeks ago, but only had his A team place confirmed in the last few days.

“Just last week I was told that I’d made the A team by the Irish manager,” he said. “I was delighted with that.”

Thomas’s place in the top junior side was confirmed thanks to a series of impressive performances at tournaments which were held all over Ireland.

“There are seven ranking tournaments held every year,” he said. “At the end of the year I was ranked second overall from around 40 junior players across Ireland.

“We have competitions which are held at regular intervals all over Ireland throughout the year,” he added. “If you do well in the first competition, which I was lucky to do, then I was seeded well in the rankings.

“Being seeded in the top four means you can’t be drawn against those other players in the early stages of future competitions, which gives you a chance to keep on doing well. I made three successive semi-finals and a final, so that helped keep my ranking up.”

Playing all over Ireland means he is no stranger to the highways and byways.

“There’s a hell of a lot of travelling,” he said. "You could have a competition in Monaghan, which is a four-hour drive from Kilkenny, then move on to Dublin for another. The next tournament is in Tullamore in a fortnight’s time, so there’s plenty of miles to cover.

“The competitions are well spaced out, maybe every month and a half to two months; there are little events held every week or so in Wexford, which I would go to at times to get a bit of practice against other junior players.”

Kilkenny is a county blessed with many sporting distraction, but why pool? Well, it’s all down to his mother...

“My mother (Irish women’s player Louise Maher) got me into it,” Morgan explained.

“We had a pool table at home when I was small. I can remember Mam using it to train against friends and I’d be in there annoying them! I managed to get a game or two and beat a few people.

“After that she brought me to play a few more games. I think I won something like 14 in a row - I even beat her, which she wasn’t too pleased about!”

Preparing for a major tournament means putting in many hours of training - not easy considering Morgan is a Leaving Cert student at St Kieran’s College.

“It can be tough to combine everything,” he said. “I have school from Monday to Friday, then after 4pm I go to after-school study until 7pm. I also have maths grinds so I’m not home until after 8pm most evenings.

“You still have to find time to play pool - most evenings I would practice shots before going on to play full frames - for a few hours.

“Trying to cram so much in is tiring,” he added. “You’d be wrecked after it.”

Just as draining is trying to raise sponsorship for these events.

“It can be tough trying to get money together for hotels and things in Ireland, so it’s another step up when you’re travelling to an international event,” he said.

“There’s a lot of expense there that people don’t see when it comes to pool. It’s an expensive hobby!”

Morgan, who turns 18 in March, is hoping for an early present in France.

“I’m really looking forward to getting out to the European Championships,” he said. “There’ll be pressure on us to keep the trophy, but we have a very strong team going over. Hopefully we can bring the title home.”