Swimmers make a splash in Leinster 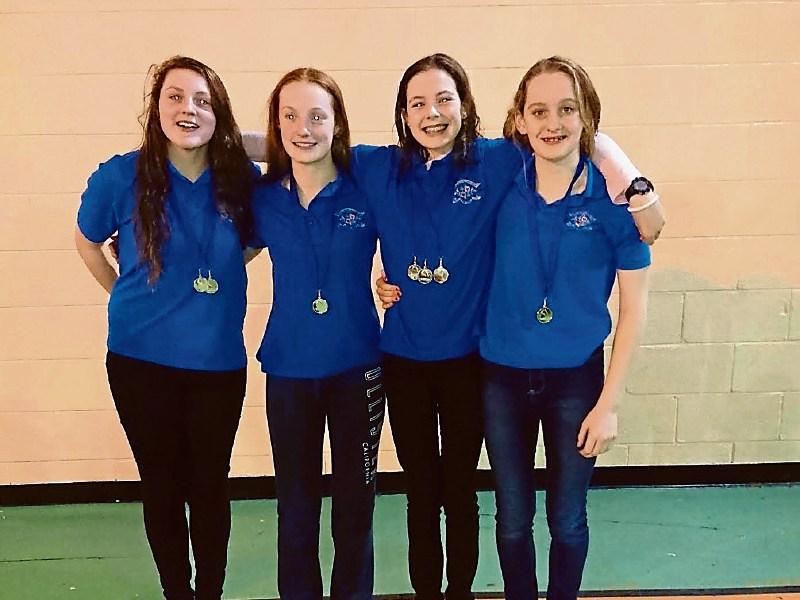 Kilkenny swimmers were the toast of the county as a series of top class results drew a golden wave of medals.

Tallaght was the venue for the Leinster senior schools swimming championships. Competitions were open to all school students in the province, with each student allowed to enter two individual 100m events and be part of two relay teams representing their school and not their clubs.

Maria was also fourth in the 100m freestyle and was chosen as one of the top five fastest swimmers of all age groups to compete in the open 400m freestyle. She finished in fourth place, just 0.1 seconds behind the second finisher.

All the girls put in great performances and saved their best for the relay teams.

The team of Maria Godden, Rachel Vaughan, Aine Trait and Eva Cashin won gold for Loreto Kilkenny in the 4x50m 15-16 medley relay with a time of 2:11.89.

Following this race Maria, Aine and Eva were joined by Ana O’Shea (who had just competed in the age 13-14, 4x50m freestyle relay) to win gold again for the school in the age 15-16 200m freestyle relay. The quartet broke the two minute mark, winning by more than two seconds in a time of 1:59.65.

All the girls competed to the highest standards in all their races and wore their school colours proudly in front of the best swimmers in Leinster.

Maria will now go on to represent Leinster and her school again this year in May in the Inter Provincial Championships, which will be held in the National Aquatic Centre in Dublin in May.

The girls also intend to enter their relay teams and represent their school in the National Relay Competition held on the same date.