Now Callan has a cycling club 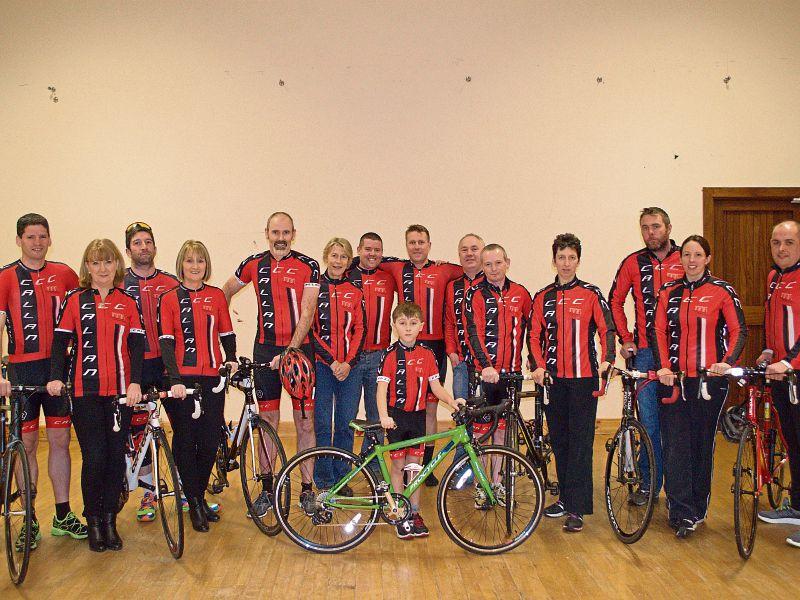 Obesity is the buzz word in Ireland at the moment, coupled with the perils involved with the consumption of sugar in all its forms. Families have been sent scurrying in all directions.

Honestly, one doesn’t have to look far for the reasons why Johnny is so heavy or why Maggie is carrying more than her requisite lairs of puppy fat.

More and more people, however, are taking notice, looked for realistic solutions. Running and walking are now attractive options.

Until recently the preferred exercises centred around running/walking. Now another sporting phenomenon has gripped the population - cycling.

And Callan is getting involved!

We met with the elected treasurer of the latest club in Callan, a cycling club. Dermot Hartley, who lives in The Meadows in Callan town talked about this new and expanding exercise option.

Our opener was a no brainer. Where did all this start, by whom and why?

“It probably started as a result of Pat Stafford, who is an avid bike fan,” he explained.

“It seemed to him that many of the people making the transition from one sport to another were becoming more obvious. So one day he put a notice up on a Facebook page, asking if there were any who would like to consider setting up a cycling club to contact him.”

Diarmuid O’Dwyer, endearingly known as ‘Dod’, picked up on the Facebook message and between the jigs and the reels, the idea became reality. The response was hugely positive.

A meeting was set up in The Steppes hostelry. Nearly 20 people attended, and many sent expressions of interest.

“There were loads of reasons proffered by people for becoming interested, but I suppose two reasons dominated,” Dermot informed. “One was the fact that cycling served the same function as using the by-pass, with one exception.

“The impact pressure from running on solid surfaces is non-existent when one uses a bike for exercise.”

I remember lads like yourself and Diarmuid, Colm Keher and Jimmy Corcoran and his wife Trish taking off on bicycles some 12 months ago. I suspected that it was more experimental than a dedicated option.

Later I noticed that you and your wife Sheila, an ICU nurse in Clonmel General, also cycled, and not too long afterwards, I watched in abject envy both you, Diarmuid and some 12 youngsters take off for a spin. Two of the youngsters were your twin daughters, Lauren and Rachel, who seemed so at ease with their bikes.

The same could be said of Diarmuid’s son, Adam and the rest of the children. Given the present-day commentary about poor dietary practice, cycling will be very evident as your club expands?

“That would be one of the objectives of the exercise,” said Dermot.

“Like the rising tide that raises all boats simultaneously, this new cycling club in Callan could provide plenty of opportunities for young and old to address problems they may have in those areas,” he added.

The name of the new club?

“It is called the Callan Cycling Club,” Dermot explained, “and we have ordered some 29 full cycling kits in the club colours for our membership.”

We caught up with the inaugurator of the ‘Put Callan on Bikes’ programme. Pat Stafford took up residence in Callan some four years ago.

“I have been cycling for at least 15 years,” he told us. “I am from Wexford Town, where I got involved with the Wexford Wheelers.

“After that I moved on to the Slaney Wheelers, who are based in Enniscorthy, so I have been a good number of years involved with the bicycle.”

Why Callan for cycling?

“For one I suppose, although this is attributable to most areas of Kilkenny, there is a tremendous sports ethos in the place,” Pat continued. “Hurling, soccer, handball, racquetball and other sports are more than cutting the mustard here.

“I felt cycling would hit the spot for many who may not be interested in the mainstream sporting disciplines. So I chanced putting a notice about it on my Facebook page, and I was surprised at the response.

“So I felt that maybe I should pursue the matter further, and here we are,” he smiled.

Pat was at pains to underline the social side of a cycling club. Cycling and competition don’t need to go hand-in-hand.

“A cycling club is about enjoyment, making new friends, riding the roads wherever; admiring the beautiful land we pass through, sharing time and cementing friendships,” he insisted.

“We will be encouraging young people to join the new club, and maybe, just maybe, a few might wish to take their interest more seriously.

“They may wish to take their cycling prowess to a higher domain, but in truth, for the vast majority who will hopefully join our club, the social involvement will be paramount.

“Contingent on that, of course, fitness of mind body and limb should manifest itself over time.”

He too advocated the benefits of cycling as an exercise discipline as opposed to road running.

What kind of plans would you have in the pipeline for the CCC?

“Obviously we would hope that we could increase our membership during the Spring months, so that by the Summer we could be thinking of possibly running Sportives (local competitions embracing all ages and genders, without too much physical demands). We would hope to develop an inter-action culture between the other clubs in the county.

“There are some terrific cycling clubs around in Kells, Castlecomer (Deenside Wheelers) and the City clubs. So next Summer we could involve our members in their Sportives with a reciprocal arrangements in Callan.”

Does everybody need one of those outlandishly price bicycles to join a cycling club?

“Listen, any kind of a bike will suffice,” he assured.

“Whether you have a racer - which you would need a mortgage to purchase - a mountain bike, or even a rare animal like a high Nellie, you can join a cycling club.

“The bike doesn’t matter. I must emphasise the social element, the inter-action in cycling as a club.”

We broached the value of taking in juvenile members, and the inherent dangers that must be addressed when cyclists go on the main highways.

“No club will survive, or prosper if it does not have a youth policy,” Pat insisted. “The success or failure of any club is in the detail it addresses towards juvenile membership. We will obviously have a Charter that will govern safety, health, discipline on and off bicycles on and off roads.

“It will also cover elements like supervision of juveniles on the roads. Like other clubs that have a youth policy, all of our adults charged with the care and admin of under-age cyclists will need Garda clearance certificates.

“Every member will be insured under the Cycling Ireland Policy.”

In the foreseeable future where do you see Callan Cycling Club going?

“I think that we will have a great number of Callan people enjoying cycling, feeling better about themselves, enjoying a limited level of Sportive competitions and clapping themselves on the backs for doing something that initially they would never have contemplated, but will come to enjoy and respect,” he added.

Diarmuid O’Dwyer is an avid cyclist, without the competitive element. He is a member of the Irish Defence Forces, having seen overseas service in many foreign trouble spots.

He cycles to work in James Stephens Barracks regularly. He loves cycling. He is the PRO of the new club, and when I asked him for an interview, he produced his first Official Press Release.

Callan cycling club hope to cater for all levels of cyclist in the community, from the experienced biker to the beginner with little or no cycling experience and everyone in between.

As a club they embrace new faces and would be delighted to welcome on board people with an interest in becoming part of the club.

“All you need is a bike, a helmet, an interest in getting fit and a willingness to meet new people,” the press release stated. “We will be holding training/introductory spins each weekend (Saturdays).”

Callan cycling club will hold a registration/open night Friday, January 29 (7pm) at the Friary complex in Callan. People should feel free to drop in if they think they might want to become a member, or just want to find out more information.

For any other details check out the Callan cycling club Facebook page or e-mail the club at Callancyclingclub@gmail.com.

We wish Diarmuid, Pat and Dermot good luck, good will and good cycling. This is a new innovation available to people in Callan.

It will tick plenty of boxes for those interested.

Now what could be wrong with that?