"I will beat this injury," declares a defiant Aylward 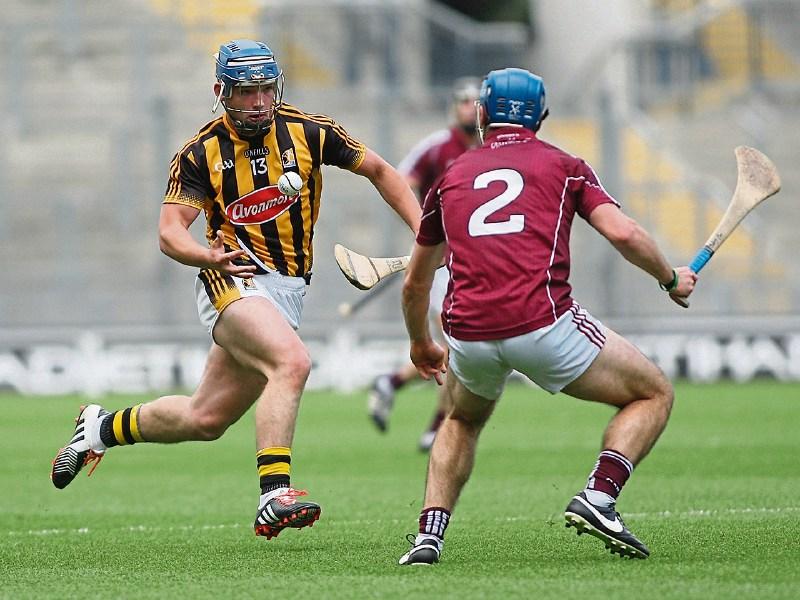 Kilkenny All-Star, Ger Aylward, has vowed to use strong personal determination to save his hurling career.

“This isn’t going to beat me,” insisted the 23-year-old after he ruptured a cruciate ligament in his knee at the weekend.

The newly crowned All-Star faces a recovery period of around a year after surgery to correct ligament and cartilage damage.

In the short term Aylward will miss the All-Ireland club junior hurling final with his beloved Glenmore, who face Eoghan Rua (Derry) in Croke Park on Sunday week, February 7.

Further down the line he will miss the National League and championship with Kilkenny, and Glenmore’s return to the intermediate league/championship.

“This is a fight I face on my own, and I will tackle it,” insisted the star attacker.

“I would be wickedly headstrong anyway, so I will use that streak to fight this,” he added. “I intend to come back stronger next year.”

Aylward suffered the injury in the All-Ireland junior club semi-final against Dungourney (Cork) at the WIT centre on Sunday. The game was no more than 19 minutes old when he was carried off the field.

“I knew straight away it was no ordinary injury,” Ger said. “I never felt anything like the pain.”

After the game County Board chairman, Ned Quinn, was one of the first people to chat with the player. He had already put in a ’phone call to orthopaedic specialist, Mr Tadhg O’Sullivan, placing him on standby just in case his expertise was required.

On Monday at the Whitfield Clinic, Waterford, Mr O’Sullivan took blood off the injured knee before delivering the bad news.

“It’s a disaster,” was Ger’s first comment. “Missing the All-Ireland final with the club is awful. Something like that won’t happen too often.

“I am not the first one this has happened to, and I won’t be the last but it has robbed me of a great opportunity with the club in the All-Ireland final,” he added.

He said the injury was a huge challenge and he will overcome it.

“There is the best of physios and medical team in Kilkenny. I will do what they tell me to do,” he insisted.

Aylward has been booked in for his next appointment with Mr O’Sullivan in three weeks time. After the swelling in the knee settles, he will be taken into hospital for surgery.

“This just goes to show how cruel sport can be,” Ger continued. “Everything was going nicely for me with club and county, and then this.

“It is tough to take, but I will get over it. I will get back. I will be on the sideline with Glenmore in Croke Park in two weeks time and I will do my best to drive them on.

“Hopefully we will be able to do the business.

Feeling sorry is a waste

“There is no use in feeling sorry for myself. That is a waste of time,” he insisted.

He bounced back in grand style in 2015. He announced his arrived on the senior stage by shooting 3-5 in the championship against Wexford.

After figuring in Kilkenny’s four championship matches he finished with a hugely impressive tally of 3-15.

The brilliance of his season was reflected in his selection as an All-Star.

“We suspected the extent of the injury on Sunday,” admitted Glenmore manager, Thomas Mullally.

“There are long term implications beyond the February 7 final. This is a huge setback for Ger, especially bearing in mind the form he was in.

“He was getting a return for all the effort he was putting in. We will miss him in the All-Ireland and he will be a huge loss to us going back into the intermediate grade.

“He is a great leader as a captain, and he has grown immensely as a hurler.”

He said the progress Aylward made during 2015, when he came from virtually nowhere to become an All-Star, was tremendous.

“It is a year he will always look back on with pride,” he insisted. “He put in the work and performed at a consistently high level.

“This year was going to be huge for him. It would have been the year he would have cemented everything he did last season. That was probably the biggest challenge for him in 2016.”

He insisted the player will have the strong support of the Glenmore club and parish during his recovery, and everyone would be looking forward to his return in 2017.