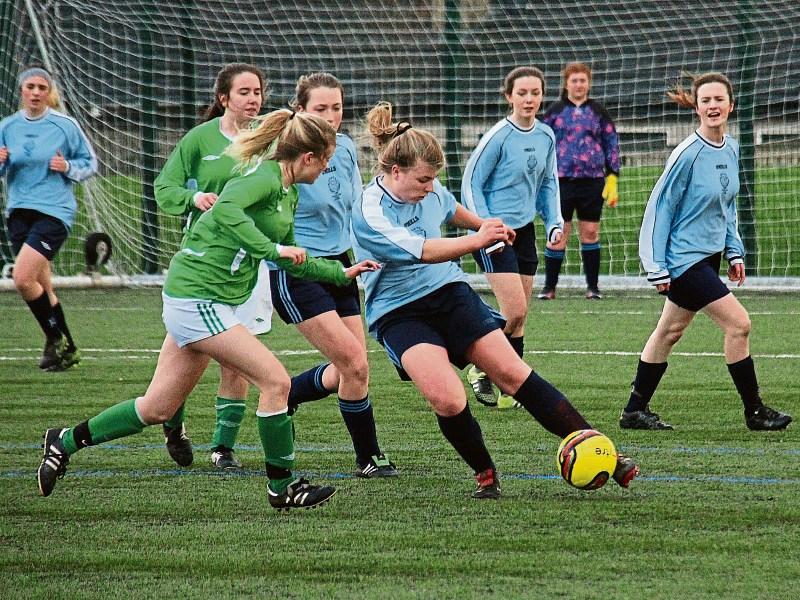 A power-packed performance saw the girls from the Presentation Kilkenny make some football history - but they’re not finished yet!

Moville Community College were the latest team to bow to the Kilkenny girls, who made no mistake as they blasted their way into the FAI Schools senior girls’ final.

And key to their success was the goal-scoring form of the O’Keeffe sisters. Jenny and Ally O’Keeffe both hit the net with first half strikes that set their team up for their first ever tilt at a national senior title.

Moville, who were missing their injured international star Roma McLaughlin, had no answer as they were simply blown away by the girls in blue.

Coached by Jenny Reddy the Presentation girls may have been new to these proceedings, but started the stronger side at a windswept Dundalk Sports Centre.

The Kilkenny side settled into the game, with skipper Orlaith Conlon going close to opening the scoring for the Pres in the first quarter. Good work down the left wing saw Hannah Scott pick out Conlon with a great delivery.

Breaking free on the edge of the box, Conlon unleashed a powerful drive but her shot just drifted wide of the mark.

That miss was a let-off for Moville and their goalkeeper Cody Anderson, but the relief was shortlived.

The Pres attack proved to be a constant thorn in the Moville defence’s side, with the lightning-paced Lauren Valentine running at the Ulster girls from at every angle. With midfielders Ciara Phelan and Aobha O’Gorman working hard the Pres kept pushing for a way through and got their reward midway through the half.

The Presentation girls were dominant at this stage, and took a deserved lead when Jenny O’Keeffe weaved her way through the Moville defence. O’Keeffe, who bagged a hat-trick in the Leinster final, added to her tally with a cool strike that flew into the Moville net.

That O’Keeffe goal was swiftly followed by another! Jenny’s sister Ally added her name to the scoresheet, hitting the net after a fantastic cross from Hannah Scott.

Moville had no answer to the O’Keeffe one-two, and couldn’t fight their way back into the game before half-time.

The Donegal girls did their best to mount a comeback in the second half, but their hopes were sunk when Ciara Delaney made the game safe. Dreams of All-Ireland glory became even more realistic for the Pres when Delaney angled a sweet shot into the top left corner of the Moville net.

The Pres now await the winners of the other semi-final between the Pres Thurles and Meánscoil Muire gan Smál, Convent of Mercy, Roscommon. The final is scheduled for February 24.