Champions come a cropper as Carlow claim a valuable scalp 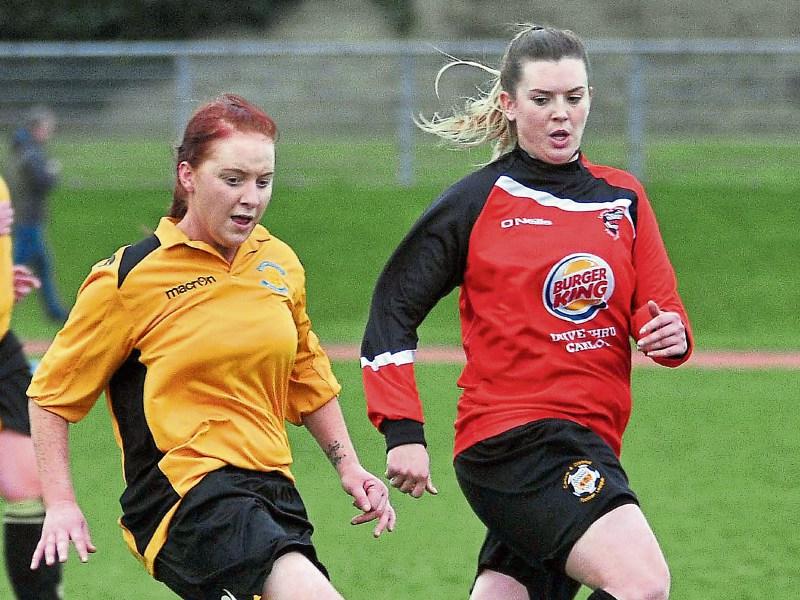 The trek towards a treble may have become even harder for the Kilkenny & District League’s women’s team after they faltered on their opening step of this year’s competition.

The reigning Leinster inter-league champions can still hold on to the Angela Hearst Cup for a third year, but their hopes have been dented after neighbours Carlow got one over them at a windy Scanlon Park.

Two first half goals did the damage as the Cats were sent crashing to defeat. While there’s still time to get over that loss, their feat is made all the more difficult by the fact there are only four teams in this year’s competition.

Making the final is still well within their capabilities, but with away games to come against the Combined Counties and Kildare the Cats could have done with taking all three points in their only home game of the competition on Sunday.

Kilkenny were keen to hit the ground running and almost made a stunning start. Taking on the Carlow defence, Jenny Reddy cut right on a diagonal run before cutting back along the byline and whipping in a teasing cross.

Carlow ’keeper Megan Walsh was caught out by the flight of the ball and spilled the delivery, but a defender was on hand to hook the ball to safety.

With a strong wind at their backs in that first half Carlow were keen to press Kilkenny at every turn. They almost made their hard work count as early in the sixth minute, when Jenny Donnelly used the elements to add fizz to her long range free-kick.

The ball took a wicked bounce in front of goalkeeper Jane Maher, who could only parry it away. Aisling Behan seized on it, zipping a quick shot towards goal, but Aine Lannon was there to clear it off the line.

Kilkenny didn’t have as much fortune when Carlow mounted their next attack, falling behind with 18 minutes on the clock.

Advancing up the field, almost inch by inch, the visitors began to put the squeeze on Kilkenny. They got a chance when Elaine Ware aimed a throw-in front from close to the corner flag towards Stephanie Keogh.

Despite being in a crowded box the midfielder found enough room to slide her shot between ’keeper Maher and the post.

Kilkenny found it tough to break Carlow down in that first half. They had plenty of possession, with Assumpta O’Farrell and Jenny Reddy driving the side on through midfield, but they couldn’t find the final ball to trouble the visitors.

Carlow’s attacks didn’t yield much more in terms of chances, but they became more of a menace as half-time loomed. Essmay Mannix gave the Kilkenny defence a fright when flashed a 42nd minute ball across the face of goal, but the Cats were relieved to see it go out the other side of the box.

The danger wasn’t fully over, as full-back Leanne Tumulty sprinted forward to meet the ball, but she blasted her shot wide of the mark.

Carlow continued to keep up their pressure and made it count on the stroke of the interval. Stephanie Keogh created the opening with a telling ball that sent Ashling Behan away down the right.

Her low cross into the centre was intended for Mannix, who seemed certain to score, but in trying to clear the danger defender Aisling O’Grady could only turn the ball into her own net.

Kilkenny were really up against it now. They needed a big start to the second half if they were to get back into the game - and they duly delivered.

The game had only just begun when Kilkenny cut Carlow’s lead in half. The visitors failed to clear Aine Lannon’s dangerous corner and paid the price when Jenny Reddy burst in to slam the loose ball to the net.

Lannon was involved again just a few minutes later, when she whipped in another corner. It almost led to an equaliser, as Niamh Bolger connected with a powerful header, but the ball spun over the bar.

The hosts kept pressing for a way back into the game, but nothing paid off. Demi Donovan went close after the hour mark, cutting in from the right and skilfully turning past her marker, but Megan Walsh got down smartly to make the save.

The Cats didn’t throw in the towel, but they must have known it wasn’t going to be their day when another chance went abegging.

Sonia Buggy went close this time, breaking into the box to get on the end of another teasing Lannon corner, but her glancing effort seared the top of the bar.

Things went from bad to worse for Kilkenny in the final quarter of an hour. Losing Jenny Reddy to injury took from their momentum in attack while, at the other end, Carlow sub Niamh Power kept the Cats' defence busy with some probing runs into the box.

With time ticking away Kilkenny continued to give their all. They went close to rescuing a point when Demi Donovan whipped in a tempting cross, but Sarah Haughney's clearing header frustrated them again.