Agony as Cats get caught on the line 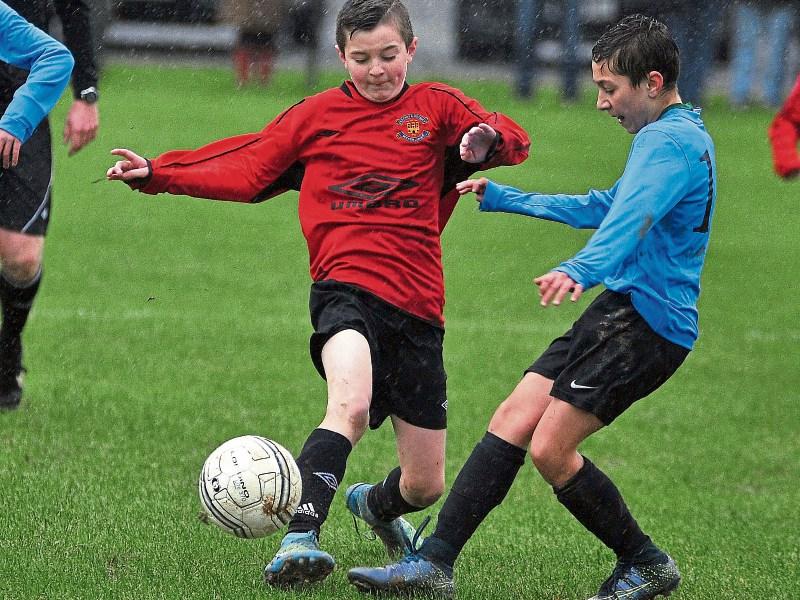 A last gasp equaliser denied the Kilkenny & District League’s under-12s from scoring a big win in the Leinster inter-league.

Kildare were the party-poopers, netting a 59th minute leveller to ensure they left a rain-soaked Derdimus with a share of the spoils on Saturday.

On reflection, the visitors deserved to go home with something, which they did thanks to Magnus Ungureanu’s late late strike, but it was a bitter pill for the hosts to swallow after a strong second half performance put them in the driving seat.

Still looking for a win after their opening two games the Cats were determined to put in a big performance, but they had to be on their toes as Kildare went for the jugular early on.

The visitors had a great chance to stamp their authority on the game as early as the fourth minute, when Mark O’Donovan sent Jack Flanagan sprinting through on goal but Bill Hughes made a super save, getting a strong hand behind the shot to push it away for a corner.

O’Donovan was a real gem for Kildare, his attacking play forming the lynchpin of a midfield unit which saw Kildare spray the ball around confidently.

Kilkenny had to be tough in defence for most of the first half. Matthew Kelleher proved as much, producing a well-timed tackle to deny Fionn Noonan a goal with 18 minutes on the clock.

The Cats showed their claws soon after that. Cian Dunne went close to breaking the deadlock when slipped through by Ted Dunne’s clever pass, but his 21st minute shot was turned out for a corner. Mikey Raggett had a bite at goal from the resulting corner, connecting with a smart volley, but the ball whizzed wide.

The hosts kept that same attacking mentality going into the second half. They served up an early warning of their intentions when Dylan Hunston and Ben Peters teamed up to give Mikey Raggett a shot on goal two minutes after the restart, but David McPartlin got back to nick the ball away.

Kildare had to look lively again as, from the resulting corner, the Cats almost opened the scoring. Dylan Hunston’s initial corner was cleared but his second attempt floated over the head of goalkeeper Cian Ward – Eoin O’Leary saved the day with a header off the line.

Kilkenny shrugged off that miss and took the lead just two minutes later. Once more Hunston was involved, firing in a corner which Ward found too hot to handle – Ben Peters was there to stab home the loose ball.

The hosts were on fire now and were intent on making their confidence count. Pushing for a second goal they thought they had found it when Raggett’s defence-splitting pass sent Cian Dunne racing through but Ward did well to force the striker wide, his shot crashing into the side netting.

That only served to stir Kildare into action once more. With the game in the last 20 minutes they adopted greater urgency as they pushed for an equaliser.

They nearly found it too. Mark O’Donovan went close when he curled a 40th minute free-kick over the Kilkenny wall, but sub goalkeeper Dara Cuddihy made a fine save.

Cuddihy was called into action again in the 51st minute. This time he did well to get down and block Ozahe Irhue’s low shot. Eoin O’Leary grabbed the rebound, but Ted Dunne bravely put his body in the way to make a great block.

The pressure was growing, but still Kilkenny resisted all Kildare’s efforts. They were living a little dangerously though, as the visitors went within a whisker of drawing level eight minutes from time.

Fionn Noonan thought he had found the equaliser when he connected with a menacing cross and beat Cuddihy with a looping shot, but Ray Lawson was on hand to head the ball off the line.

With time running out Kilkenny thought they had done enough to secure their first win of the competition – but right at the death the rug was whipped from under their feet.

The game was heading for the final whistle when Kildare gave it one last shot. Jack Flanagan rolled the dice, threading a ball through the middle for Magnus Ungureanu to chase. Winning possession he stayed cool, slipping a steady shot home to rescue a point and dash Kilkenny’s victory hopes.