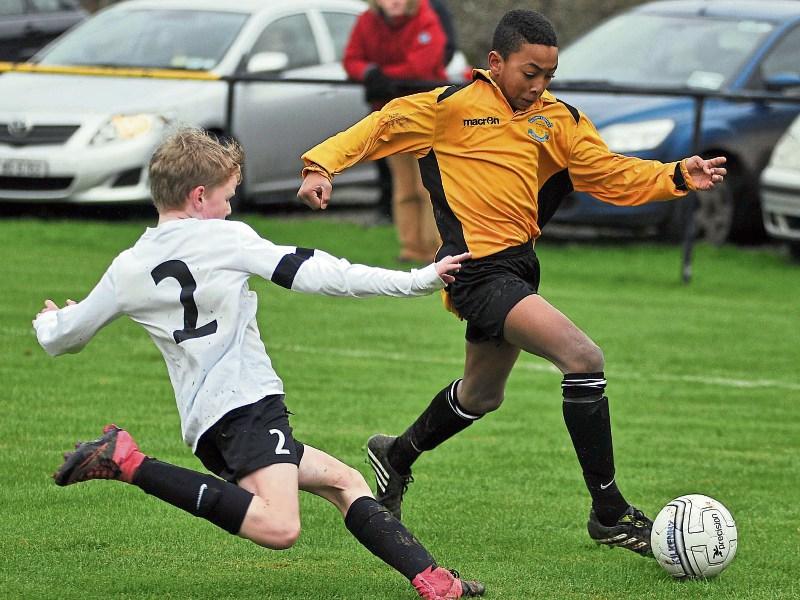 They had been riding high in the Leinster inter-league, but the Kilkenny under-13s were brought down to earth with a real bump on Saturday.

A sharp-shooting Kildare stormed to the summit of Leinster’s Group One, and hurt their rivals’ hopes of making the All-Ireland stages, when they stormed to a solid victory in Derdimus.

Both teams had won their opening two games, making this a top of the table clash. However it was the visitors, who had rattled off 11 goals in their opening outings, who continued their scoring form to notch up a good win.

Kilkenny knew they would have a tough job silencing a strong opponent, so went into the game with an all-out attack mentality.

They almost made that intention count within a matter of seconds, when Zach Bay Hammond burst down the right and whipped in a teasing cross, but Paul Kiely’s shot was deflected out.

The Cats stayed on the front foot in those early stages, pressing and testing Kildare for a way through. They went close again on seven minutes, when Timmy Clifford was played through by a super ball from Niall Rowe, but his run was halted when he was upended on the edge of the box by Kildare ’keeper Mark Young.

Awarded a free, Kilkenny almost punished Kildare. Kiely unleashed a stunning strike, whipping the ball over the wall and towards the far right corner but Young made a superb save, diving to his left to push the ball to safety.

All of the momentum was with Kilkenny at this stage, so it was no surprise to see them take the lead just two minutes later. Daragh Casey got the ball rolling, winning a vital challenge in midfield before working the ball out to Hammond.

A quick pass gave Clifford time and space to strike from the right side of the box - he didn’t miss, delivering a clinical finish that flashed across the ’keeper and inside the far left post.

The one goal lead could, and should, have been doubled within 60 seconds. With Kildare reeling, Clifford shrugged off tackles along the wing before firing over a teasing cross. Kiely ghosted in at the back post, but it was just too high for him to turn into a dangerous shot.

Had Kilkenny made it 2-0 then the game could have been so different. Instead, that fright only served to spur Kildare on to find a quick equaliser. Pushing forward, the Cats were caught off-guard by James Kilbride’s teasing ball forward.

Conan Noonan picked up play on the left and, even though he was forced wide by Kilkenny ’keeper James Keegan, still had the composure to squeeze the ball in from a tight angle.

The action settled down after that, but just when it seemed the sides would remain level at half-time Kildare struck. Nathan Anywanu, who missed an earlier chance to get on the scoresheet, made no mistake when he seized on Oisin Hand’s injury-time pass and drilled the ball past Keegan.

The Cats were still well in the game as the sides came out for the second half, but the little slice of luck they needed wasn’t there. They went agonisingly close to finding an equaliser when Paul Kiely worked the ball on to Timmy Clifford, but somehow his diagonal shot stayed out of goal.

It wasn’t all one-way traffic; Kildare almost doubled their lead when Oisin Hand’s telling pass unlocked the Kilkenny defence, giving Conan Noonan time and space to race through, but James Keegan stayed big to make a super save.

There was little the netminder could do, however, when Kildare struck twice in little over 60 seconds to take a firm grip on the game. Close-range finishes from Nathan Anywanu and sub Ben Coen did the damage as the visitors eased away with plenty of time to spare.