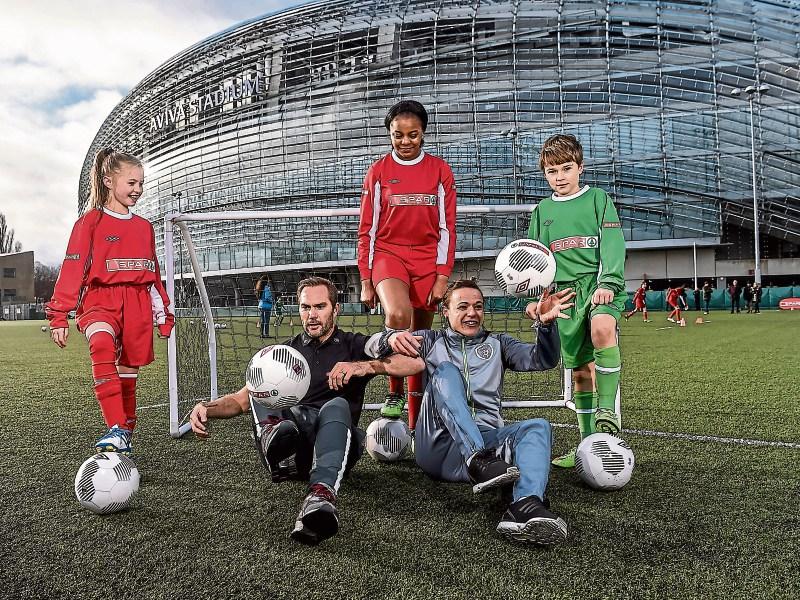 SPAR and the Football Association of Ireland today launched the 2016 SPAR FAI Primary School 5s Programme in the Aviva Stadium. The fun five-a-side schools competition is open to boys and girls from fourth to sixth class.

County blitzes will begin at the end of the month and the winners will then progress to regional, provincial and the prestigious national finals which will be held in the Aviva Stadium on May 11.

The SPAR FAI Primary School 5s Programme is a schools initiative organised by the Football Association of Ireland Schools (FAI Schools) and supported by SPAR. The competition attracts entries from nearly 20,000 students and more than 1,000 schools nationwide. With participation levels increasing year on year the grassroots programme is now the largest primary schools competition in the country.

Speaking about the programme Colin Donnelly, SPAR Sales Director commented: “We in SPAR are very proud to be involved with this programme which sees nearly 20,000 boys and girls get the chance to represent their schools on regional, provincial and even national levels. We’re looking forward to building on the success of the SPAR FAI Primary School 5s Programme last year.

FAI Schools are delighted to announce the launch of this year’s competition. Mr. Sean Carr, FAI Schools Chairman stated: “The competition is a wonderful opportunity for both boys and girls of all sporting ability to participate in a fun filled initiative with an emphasis on enjoyment and well-being. Thanks to our sponsors, SPAR, the pupils will be given the opportunity to showcase their talents in the Aviva Stadium at the National Finals. I would encourage all primary schools to sign up immediately”.

To register, schools can log onto www.fai.ie/primary5. Schools can also follow all the action live on social media using #SPAR5s