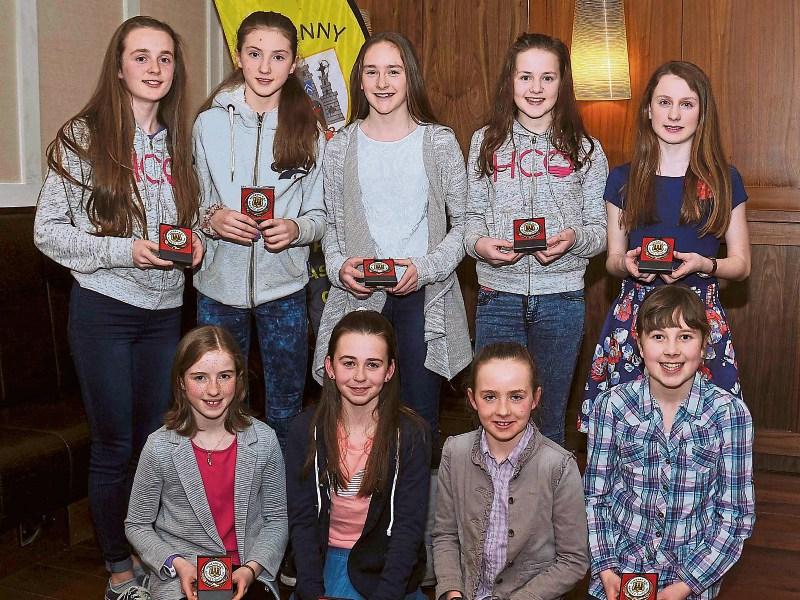 The cream of Kilkenny athletics were honoured for their prowess at the Co Board’s annual awards night on Friday.

A large crowd of athletes, mentors and parents flocked to The Pembroke Hotel to celebrate the achievements and successes of the 2015 season.

First to be honoured were the county’s juvenile cross -country teams. The county boys’ under-16 team won bronze and the girls’ under-12 team silver at the even age groups cross-country championships in Santry, while the girls’ under-13 team won bronze at the uneven age group championships in Dungarvan. Each team members received a special award presented by cross-country champion Brian Maher.

Next to be recognised were the ten athletes who set championship records in 2015. Included in this group were David Murphy and Peter Dunne (Gowran), Lauren Dermody (Castlecomer), Ciara Deeley and Rachel Kelly (KCH), Brid Lawlor, Mag Helen O’Connor, Sophie Becker and Verena Fenlon (St Joseph’s were presented with their awards by national 1,500m champion Eoin Everard.

As part of this year’s awards ceremony each club was asked to nominate someone who deserved recognition from the Co Board.

A number of cups and shields for the various county championships were also presented on the night. Presentations were made by county treasurer Michael Manning.

The AAI Games, which were held in the AIT Arena on Sunday, saw a number of excellent performances and podium finishes for Kilkenny athletes.

Eoin Everard (KCH) pulled off a significant win in the 3,000m event. With the help of a pacemaker he settled in early and took the win in 8.13. Peter Lynch (KCH) made his debut at this level in the same race, finishing ninth in a good time of 8.43.

In the women’s 3,000m, Aoibhe Richardson set the pace for much of the race. Despite being overtaken by a couple of athletes she fought back to finish third place in 10.10.67.

Brendan Hyland had a good competition, throwing 12.20 - just 3cms off his personal best - to win silver in the shot-put. Sophie Parkinson (Gowran) continued her good shot-put performance with a throw of 11.28 for a silver medal.

Eoin Power (St Joseph’s) competed in 200m and 60m hurdles, clocking 9.06 in the latter to finish in fourth place. KCH had three athletes in the 60m sprint events. Consistent starts saw Aaron Barron cross the finish line in 7.54 and 7.53 seconds. Louise Holmes and Sarah Kate Lacey, both of whom competed in the League final on Saturday, posted times of 7.95 and 7.98 respectively in their sprints.

Further afield KCH sprinter Cliodhna Manning has been posting some impressive times over 60m indoors. Competing at a recent indoor meet in Vienna, Cliodhna was second with a time of 7.59 seconds. She also competed at the recent Welsh Senior Championships, crossing the line in a time of 7.66 seconds to finish fifth.

The Leinster indoor championships start this weekend. Juvenile athletes will be in action on Saturday and Sunday in the relays, hurdles and distance events.