City side gets the 'Green light to join Celtic's world club 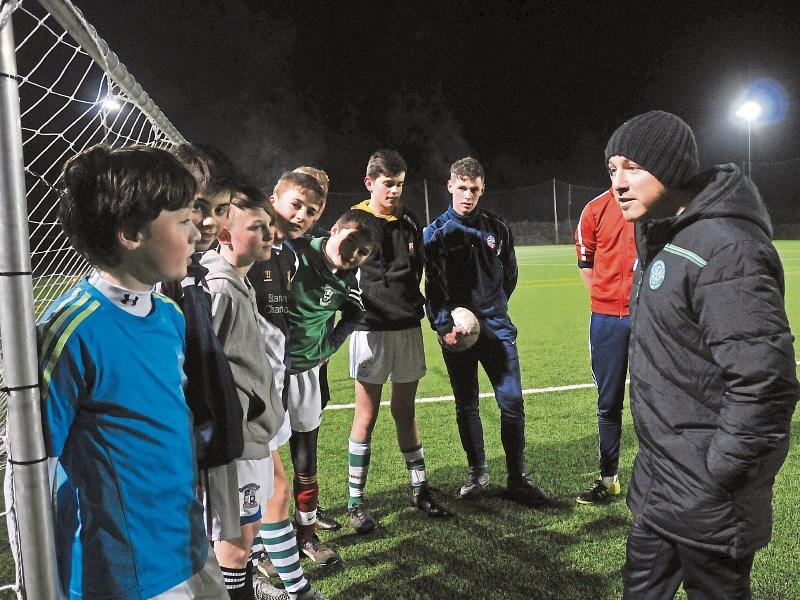 The next generation of Kikenny’s soccer player could get the chance to shine on the international stage after a local club joined forces with a European giant.

City side Evergreen have announced plans to launch a new soccer academy with Scottish Premier League champions Celtic. The Glasgow club were at Evergreen Park on Monday evening, putting pen to paper on the deal which will give local players and coaches the chance to progress their game.

In partnering with Celtic, Evergreen will have the chance to use the experience of the Scottish side to its full potential. The goal is to help players become with the chance to raise their game, while learning under coaches who will help them achieve their best.

It’s a partnership both clubs are excited about.

"We have partner clubs all over Ireland, but Kilkenny was an area we hadn’t come to," said Tony Massie, Celtic’s international soccer academy manager. "A colleague of mine, Mark Anderson, does a lot of work in identifying potential clubs for us to work with and his research pointed us in the direction of Evergreen.

"Evergreen have such a good reputation," he added. "They’re the biggest club in the area and we were drawn to them through Mark’s research. From that it made perfect sense to make the connection."

Massie was given a potted history of Evergreen’s history before taking the chance to coach some of the club’s younger players. He was impressed with what he had seen, and with the club’s plans for the future.

"It’s been great finding out bits and pieces about the club, as well as getting the chance to come down and see the new facilities here," he said. "It’s been good to hear the ideas behind what they want to do next and it’s fantastic to see what they’ve done already.

"I think the artificial pitch is brilliant and can only help the club going forward. Certainly, when we come over to do the coaching camp next month it’ll be great for our coaches to have the use of that facility for the kids. I’m a big believer in using those facilities, especially in the Winter months just to help the kids develop as much as possible."

Evergreen’s ambition is something that resonated with Celtic - they are keen to partner up with clubs who strive to improve both on the field and off it.

"Mark’s research is really important to us as he’s the person who identifies the clubs we want to be associated with - progressive clubs who are looking for a mutually beneficial partnership, one that is sustainable over a period of time," said Massie. "It has to be something that Evergreen get a lot from, the same as Celtic. We’ve spoken a lot with Evergreen about where they want to go from here, not just in terms of player development but coach development too. It fits in with what we’re trying to do with our programme.

"I think that coaches are hugely responsible for a large part of how a player develops," he continued. "If you’ve a good quality of people around your club and coaches giving good information to players then they can’t help but get better. Any small part we can play is massive - if clubs want us to help in terms of coach education then that’s something we’ll bring to the programme."

The first Evergreen coaches to feature in the Academy are Gary Maher and Eamon McPhillips. Both may get the chance to learn from some of Celtic’s international partners in the near future.

"We’ll have a coaching convention in Glasgow in March and partner clubs get the chance to come across to it," siad Massie. "At present we have 56 international partners (clubs from across the world with whom Celtic have links) so not only is this a chance to partner with Celtic but it’s a chance to partner with that group worldwide. Coaches will have the chance to speak with coaches from other countries and see what’s going on. It’s a huge network to be able to reach out to."

Having that volume of international knowledge at their fingertips is something that Evergreen can only learn from, Massie reckoned.

"I’d like to think that when they get the chance to meet up with other coaches at events like that - you’ll have people coming from the likes of North America, Australia, China and Russia - that just by speaking to those people about how they are developing their players and clubs can give you insight into Celtic and these other clubs," he said. "If there’s something there for local coaches to bring to their club then we’re doing our job right - we’re giving them a platform to see what’s out there.

"I hear it said so many times, but football is universal," he said. "It’s amazing how many different places you go to and it’s the one language that’s spoken the same way around the world.

"Football people are football people and you can speak to them whether you’re in Ireland or in South America. People want to learn new things and they are the people we’re connecting with.

"The guys who want to learn and take those little bits and pieces are the people who want to help their club and move them on. If we can give them the insight that will help them in some way - even put their own spin on it - then we’re doing something right."

Although in its infancy, the benefits of setting up such an Academy are plentiful.

While Celtic coaches will come to the Kells Road to work with players and on coach education, locals will also be able to make the trip to Scotland to learn more.

"We’d love to see the guys come across with a team of players to spend a week in the Academy and play against some local opposition," said Masie. "They would get to spend time at the club with our coaches, come to a first team game and sample everything that Celtic is about. The coaches convention is a great opportunity for any aspiring coach or someone who is far up in the game with the likes of a UEFA licence to come across and see what we’re about. It’s something which is exclusive for partner clubs so we’re hoping these opportunities will pay dividends for Evergreen."

It’s an opportunity that hasn’t been lost on Evergreen’s coaches.

"The club has grown so much in the last few years, with numbers getting so big from five-year-olds up, that we felt a structure needed to be put in place," said Eamon McPhillips, one of the first Evergreen coaches to be involved with the Academy. "We’ve tried a few things before but when Celtic came knocking on the door it was too good an opportunity to pass up.

"Hopefully it will be a long relationship," he added. "We’re hosting a camp here in a month’s time where Celtic coaches will come across for five days and coach kids from different age groups.

"From that camp, which will be open to all, we’re looking to send some coaches across to be trained by the Celtic Academy coaches on how to do things properly.

"It’s a huge honour to partner with Celtic," continued McPhillips. "Hopefully everyone associated with our club, from players to coaches, will benefit hugely from this partnership. We want to build the structure that will show players how to prepare for the game properly over the years, from under-age right up to junior level with our men’s and women’s teams."

Providing a link that runs from the club’s youngest teams to their oldest is vital for future success.

"The way we’re looking at it is that if we can get things right from the younger ages then the junior set-up should start looking after itself," said Academy manager Gary Maher, who is also the manager of Evergreen B’s Premier Division junior side. "We’ve over 200 children here every Saturday morning. Gone are the days when we had one coach for every 20 or 25 players - we need to get our coaches up to a standard at every age group to make sure we’re providing children with quality coaching.

"It’s not just a matter of throwing out a football and letting them at it - we want to lead the way, not just with facilities but with coaching, and to develop these young lads so when they get to a competitive level they’re ready to hit the ground running. That’s the aim, to compete at national level."

And if the partnership attracts more coaches, the club will be all the better for it.

"We'd never turn away coaches, but we want to be in a position where we never have to turn a child away," added Maher.

"We want to have quality coaching and to be in a position that, no matter how many children come through our doors that we can cater for them. We want to have the structures in place that these players can get the most out of their football."