Everything still left to play for as champions make their point 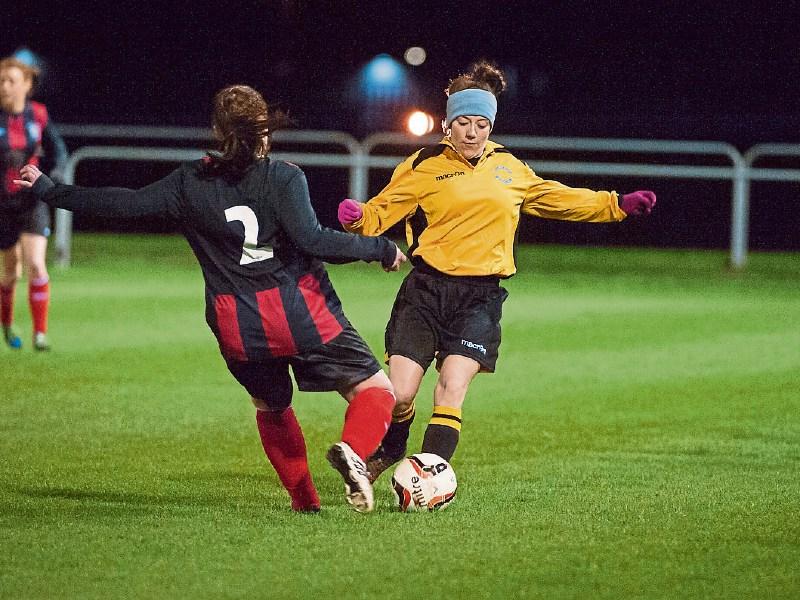 The mood in the Kilkenny & District League’s women’s camp is nothing short of defiant - if they are to relinquish their Leinster title, they won’t do it without a fight!

The Cats earned their first point of the new campaign, bouncing back from that opening day loss to Carlow, with a solid performance away to the Combined Counties on Saturday night.

The Kilkenny side shone under the lights at Tullamore Town’s ground, where but for two top class saves from home goalkeeper Grace Coughlan they surely would have taken all the spoils.

The margins were that close - “we were a big toe away from winning that game,” said coach Davy Doyle after the final whistle - but the side were still happy to have delivered a performance they knew they were capable of.

“This team has battled,” he said. “We’ve learned to adapt to different situations and we’re still in this competition going into our last game - it’s all to play for.”

The Combined Counties, who beat Kildare in the opening round of fixtures, were keen to keep that running. They were quick into attack, Jessie O’Connor breaking through inside 60 seconds, but Aine Lannon was there to make a good challenge.

Counties were keen to keep their offensive game going, but were stunned when Kilkenny lifted the siege and stormed into the lead after just eight minutes.

Pushing into the centre, Caoimhe Shiel seized on a loose ball and launched Kilkenny into attack with a low first time pass through to Demi Donovan. With the Combined Counties defence caught napping, Donovan sped through, drawing Coughlan from her line before firing home a composed shot.

The hosts were rattled by that strike, but weren’t about to stay quiet for too long. Counties captain Leana Archibold led the rally, driving through the centre of midfield on 11 minutes before unleashing a long-range shot, but netminder Jane Maher made a comfortable save.

Archibold wasn’t finished yet, beating Maher with her next shot four minutes later. Kilkenny were almost the architects of their own downfall, as they tried to play their way out of trouble at the back.

When a stray pass rolled in front of Archibold she saw her chance and took it, intercepting the ball before storming into the box and smashing it to the Kilkenny net.

The Cats were quick to shrug off that leveller, but were denied another goal thanks to a fine save from Coughlan with 25 minutes on the clock. Powering their way up the right - another booming ball from Aine Lannon got them going - Kilkenny attacked in droves.

Sonia Buggy picked up possession when it broke across the face of the box, unleashing a strong shot that zipped towards goal - but Coughlan stuck out her right foot to stop the ball. The danger wasn’t over, as Shiel seized on the rebound, but the netminder recovered quickly to hold the follow-up snapshot.

Led by the initiative of Shiel, Kilkenny kept on the front foot. The midfielder did well to hold off two defenders on the edge of the box when she stormed in to win possession in the 38th minute, but her shot was forced out for a corner.

The danger wasn’t over as, from the resulting corner, Lannon curled an outswinger right to Sinead Corrigan, but she couldn’t keep her volleyed shot on target.

Kilkenny kept that positive play going right up to half-time, but try as they might they couldn’t restore their lead before the break. It wasn’t for the want of trying; Corrigan did well to take up Ria Lawson’s throw-in and work an angle to whip in a menacing cross.

Running to the near post Shiel got there before the defence and tried to flick the ball over the line, but the Counties defence scrambled the shot to safety.

The second half saw Kilkenny continue to hold their own, but chances were at a premium. The game developed into something of a stalemate, but the big chance to take all three points went the way of the visitors just before the hour.

After a little lull Kilkenny sparked into the life when Sonia Buggy picked up possession from Caoimhe Shiel and lofted a clever ball forward - Demi Donovan was on it in a flash.

Holding off the attentions of defender Donna Murray, Donovan sped towards the box before letting fly with a raking shot, but somehow Coughlan got her foot to the ball, reaching out far enough to stop the shot and save her side from falling behind again.

Although Kilkenny kept looking for a way through that Coughlan save was their best chance of the half. The hosts did their best to push for a late winner; Tara Donnellan and Bronagh Kane had shots on goal, but neither could trouble Kilkenny ’keeper Maher as the full-time whistle loomed.

The Cats were happy to leave Tullamore with a point, but...

“It was a good point to get, but it was one of those nights where we could have left with more,” said Foley after the final whistle. “The Combined Counties had one chance, while their goalkeeper made two great saves to deny us - and that was the difference on a cold night.”

The joint manager was able to reflect on a positive performance from a side who were shorn of some of their talent.

“We were down to the bare bones for this game,” he said. “We were missing a few players through injury but the girls who played gave everything. It was a big pitch, which took a lot out of everyone, but while we might not be as strong a side as we were in previous years the side gave everything they had.”

Losing to Carlow dented some of Kilkenny’s pride, but as far as Foley was concerned the title holders responded with the attitude of champions.

“We’ve won this competition the last two years - if we were to win it for a third time it would be brilliant - but you don’t want to go out to play games and not be competitive,” he said. “We were unlucky to lose against Carlow but the girls gave a good performance - that’s all we were looking for. It was a cold night and a long way to come for a game, but they battled.”

And, with a game against Kildare to come, Kilkenny could still force their way into the Leinster Cup final.

“We’re still in it,” said Foley. “If we beat Kildare by two or three goals and the Combined Counties lose to Carlow then we’re into the final.

“All you want going into your last game is to be in a position to make that final,” he finished. “We still have that chance.”