St Kieran's take Leinster, and now All-Ireland on the agenda 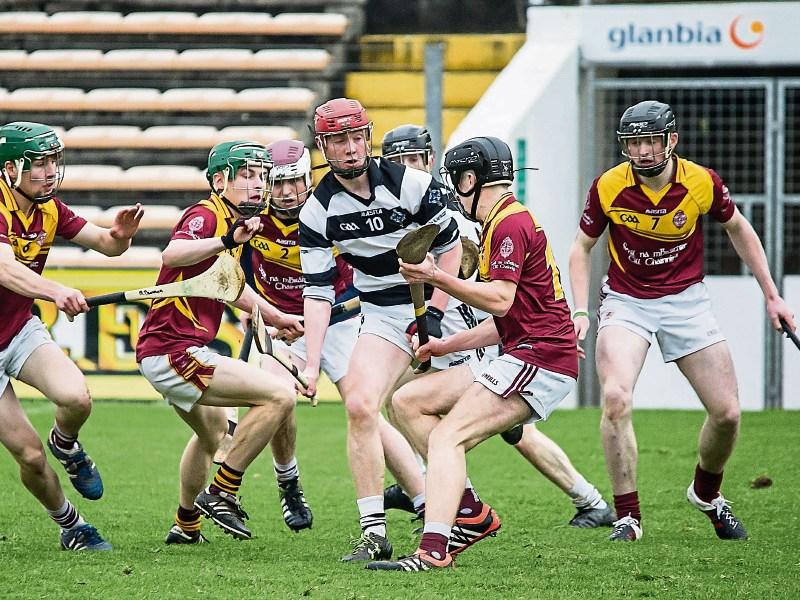 Hurling kings St Kieran's College were left to celebrate, again, but they were far from over the moon.

Kilkenny CBS were down, again, and they were bitterly disappointed.

However, at least St Kieran's had the consolation of running up their 54th success to help dilute the feelings of under performing after a far from rip-roaring Leinster post primary schools senior hurling 'A' championship final at Nowlan Park.

There was no such consolation for the CBS. In fact, pain was piled on top of pain for them when co-captain, Conor Doheny, was shown a straight red card in the dying stages of Saturday's clash.

“Sport is about taking on challenges, and we have to get ourselves right for a huge one against Ardscoil,” admitted CBS manager, P.J. McCormack.

“We know there is more in us,” he said of the All-Ireland junior championship winners of two years ago. “We have to get it out of ourselves.”

St Kieran's manager, Liam Smith, was pleased with the win in Leinster, which was a stated aim, plus the bonus of a place in the All-Ireland semi-finals, but he too will be looking for more from his players the next day.

“That was a tough game the way it unfolded, and maybe we didn't play as well as we can, so we have things to work on,” he said.

They too had a man dismissed by a referee who sometimes baffled with his decisions, but in this case Tommy Walsh went for two yellow card offences which means he will be ready to go in the next match.

On a grey afternoon, the light breeze assisted CBS opened full of promise and mischief. Barely a minute in a St Kieran's defender was hounded into an over-carry of the ball. Sean Bolger, shooting into the city end, pointed the free.

By the end of four minutes Bolger had landed two more, one from play virtually on the right sideline after side-stepping an opponent, the other after a defender had fouled the ball.

St Kieran's were being out-worked to a serious degree. They eventually opened their account in the eight minutes when Sean Carey was fouled and Adrian Mullen popped over the close in free.

The CBS blasted back. Bolger picked off two more frees when Chris Cavanagh was fouled after making a terrific catch from their own puck-out, and after John McEvoy had been fouled.

With midfield congested and players withdrawn from attack, things favoured the CBS.

The winners second score on 12 minutes was a beauty from Edmond Delaney, claimed under severe pressure.

The next one was from a free by Adrian Mullen. The one after that, a goal, was crucial.

It was the 18th minute. Tommy Walsh lashed a ball forward from the right half back position. Adrian Mullen fielded in the middle on the '40'. The Shamrocks man had a lot of work to do, but he got in a drive which took the ball into the bottom right corner of the CBS net (1-3 to 0-5).

In a flash, a lot of good CBS work was undone and they needed another score from Bolger to earn parity at the break, 0-6 to 1-3.

There was an exchange of scores after the turn before the CBS put two together per their lone scorer, Sean Bolger to edge 0-9 to 1-4 clear by the 39th minute.

Kieran's hit back through Mullen following a foul on Michael Cody. Then they struck gold again.

It was the 41st minute. Martin Keoghan took a sweet pass from Cody near midfield, and after a determined run he bagged a goal.

On the winners drove. Edward Moylan and Keoghan put together lovely passes to send Adrian Mullen clear for a point.

They went further in front on the three quarter mark when Mullen landed another free, this time after the now very involved Joe Cuddihy had his hurley held (2-7 to 0-9).

The gap was widened by another minor from Mullen - Kieran's fourth score on the trot - before Bolger and Mullen traded scores (2-9 to 0-10).

With a little over 10 minutes remaining, the CBS were struggling. Bolger got in a powerful shot at goal, but 'keeper, Darragh Phelan, saved before play was called back for a free, which was pointed.

The CBS scored a scrambled goal through defender turned attacker, Marc Drennan in the 57th minute. They had no follow up.

The winners finished with good points from Sean Carey, after rounding his man, and Mullen to seal victory.

Both dismissals were during the second half, but they had no great bearing on the out.

Kieran's had fair performers in the Mullen brothers, Darren and Adrian, Michael Cody and Joe Cuddihy in the finishing straight.

Best for the CBS were 11 point man, Sean Bolger, along with Mark Drennan, Shane Mahony and Des Dunne.

Both, however, departed the scene knowing they can do better!