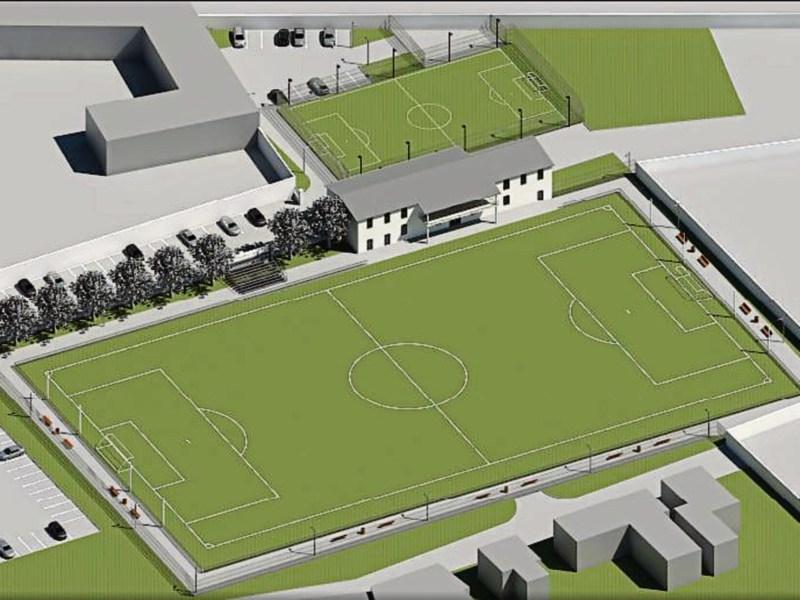 Go ahead Kilkenny junior soccer club, Freebooters, are planning an ambitious €500,000 development in the heart of the city.

An astro turf pitch is on the agenda, as is a new two storey building to accommodate dressing and meeting rooms.

And a facelift for the club's current pitch at their Fair Green home on the Jail Road, plus a walk way around it, complete with lights and small stand, are also part of the planned development.

“We will do it, no doubt,” insisted local auctioneer and club committee member, Fran Grincell, when the project was given the green light by the FAI on Friday.

“We are looking on this as a three year project,” he added.

FAI Director of Club Licensing and Facility Development, Richard Fahey, visited the Fair Green to discuss the development and he confirmed that the 'Association will be there to help and will put the project on “the priority list”.

The club is hopeful that by the end of April they will have planning permission for the new stand (to accommodate 80 people) and the walking track.

The current full size grass pitch will be upgraded, but there are no immediate plans to convert it to astro turf.

The short term plan is to develop a community walk way around it, which can be used by locals. This will be lit and monitored by cameras.

“It will be a secure place to come at night,” Mr Grincell said.

The current dressing-rooms will be demolished and will be replaced by a spacious 2,500 square foot, two storey facility. Down stairs will be exclusive to Freebooters and will feature a club shop, four dressing-rooms, store room and so on.

Upstairs will be available to the club, plus the wider community.

“It is soccer/community based project,” Mr Grincell insisted.

The astro turf pitch backing on to the current Corporation Yard and Stephen Street will measure 60x40 metres. Again it will be fully lit and monitored 24 hours a day.

The plans also include a walk way through the 'Green from Kickham Street to Jail Road, fully lit and monitored again.

Phase I of the development includes the astro turf pitch, which will cost around €150,000. It is hoped to start this in October, depending on grant aid being made available.

Freebooters have a development fund set apart from money required to finance the day to day running costs of the club.

And when the development is launched officially the club will distribute 2,000 programmes about Freebooters, the back page of which will offer people the chance to sign up to a monthly Direct Debit to help finance the project.

“We will take €5, €10 pledges or whatever,” Mr Grincell insisted. “We have been raising money strongly for over two years. This is a Freebooters and community development.”

The club has a membership of about 500, children and adults. It caters for children from five (Mini Academy) up to junior, which includes 18 schoolboys teams, girls and boys, three youths team and two junior teams.

In all, Freebooters field 25 teams.

“Look at the good we can do for the community by having it open to all,” Mr Grincell insisted.

The plan is to have the new facilities available to everyone, no exceptions, living and/or working in the area.

It won't be a profit making venture, we were assured.

Mr Fahey said “ambition was written all over the project” and it was a realistic proposal.

“There are clubs all over the country that do great work with hundreds of thousands of children every week,” he said. “They all have ambitions to develop their facilities, and we fully support them.”

FAI there to help

He said clubs can't do this sort of thing on their own. Neither could the FAI. There were always a variety of stake holders, like the Department of Sport (via the Sports Capital Programme), the Local Authority, funding agencies, plus the banks.

“The money can be there if they go about it the right way,” he insisted. “Projects like this have to broken up into chunks in terms of when things can be done.

“The ultimate aim is that you get a facility that is fit for purpose,” he added.

He said the FAI has wide experience of working with clubs and developing facilities, and all that expertise will be available to Freebooters.

The FAI would generally give out around €1.2 million in grants each year, to leagues, clubs and affiliates.

“I think this project is doable, although it might take longer than they reckon” he insisted. “The FAI will be there to help and we will put it on the priority list.”