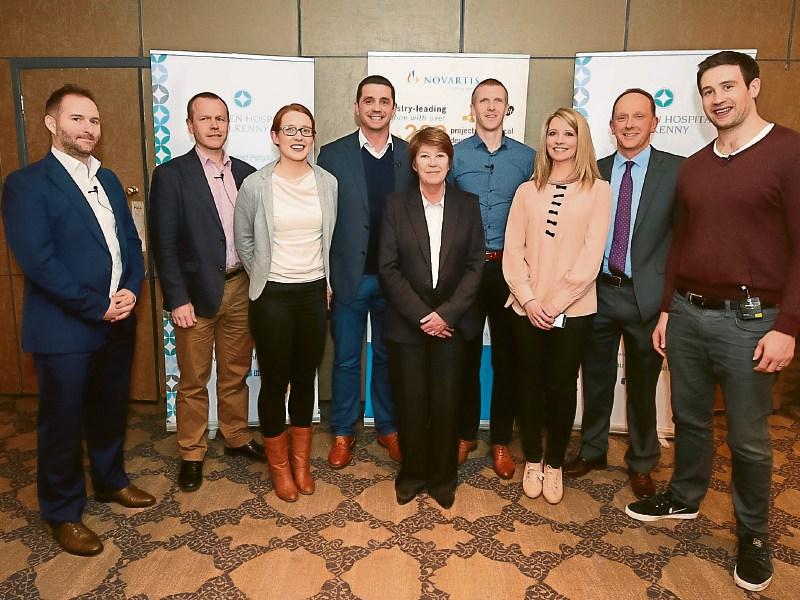 Concussion is a brain injury under a different name, a leading expert in the field told a Kilkenny audience.

And anyone who receives a concussion once is at serious risk of suffering more subsequently, Dr Willie Stewart, a neuro pathologist based at the University of Glasgow, told a near full house at the second Expert Voices series hosted by Aut Even hospital, Kilkenny, in the Ormonde hotel.

Within 24 hours of the story breaking that 70 leading doctors and academics from the UK and US called for a ban on tackling in schools rugby, Dr Stewart addressed what is one of the hottest current topics in sport on this side of the world.

“A concussion is a mild brain injury,” Dr Stewart insisted. “A whiplash can cause a consussion, it doesn't have to be a violent knock to the head.”

He completed postgraduate training in Neuropathology in Glasgow, with a particular emphasis in training on forensic neuropathology and traumatic brain injury (TBI).

Dr Stewart wasn't in favour of banning contact sports, not even boxing, because he felt the positives of active involvement generally out-weighed the negatives.

He said he preferred to use the term “brain injury” when referring to concussion, because in real terms, that's what it was.

He explained that if the brain was moved or rocked in the skull during an impact, that was the general cause of concussion.

“If you have suffered a previous concussion, you are more at risk of it happening again,” he added.

He insisted that wearing headgear didn't protect players against suffering concussion in sport. The headgear didn't reduce the impact of tackles, nor the rotation of the brain that was the actual cause of concussion.

“If in doubt, sit them out,” was his advice to medical officers and officials working with any player suspected of having suffered a concussion in a game. “If concussion is suspected - off they come.”

Dr Stewart admitted there was no reliable diagnostic test for concussion, like a blood test could confirm if a person suffered a heart attack, for example.

“Concussion is an opinion, not a diagnosis,” he insisted. “It is a grey area. That is the problem.”

He said if a doctor working with a team suspected concussion, then there should be only one outcome. The player had to be removed from the field, he insisted.

When should a player be allowed back playing he asked the audience who were told the theme of the night was 'Heads Up On Concussion in Sport'?

He had no absolute answer. He wasn't in favour of a minimum time out. The time varied with players.

“No one can tell you when it is safe to go back after you have had a concussion,” he said.

He warned that if someone suffered such an injury, and then they got a second one, there was a delayed recovery time.

Rugby was on high alert at the moment, and he praised the Irish rugby authorities safety code on concussion. Rugby, he felt, was much further advanced than other sports in which concussion was a problem in the way it handled things.

Former Leinster and Irish backrow, Kevin McLaughlin, who retired from rugby on medical grounds, was part of an elite panel of sports stars who gave their views on the issue.

He explained that he was first knocked out during a PRO 12 match. He was out of the game for a good spell, but when he returned he was shocked how easily he was getting concussed.

“If you get concussed, the risk of more increased,” he felt. “As you go on the force required to give you one becomes less and less.”

He, after consultations with the rugby authorites, decided his best option was to retire.

Rugby star, Alan Quinlan, who won 212 caps with Munster and 27 with Ireland, told the audience he didn't think he was ever concussed, and in his early days he often played three matches a weekend.

“The day of the 'magic sponge' is gone,” he insisted. “There is a fair bit of scaremongering, but the Irish rugby authorities have been good on this and have called off players when it has happened and have stood them down.”

He said people, players and officials, had to educate themselves on the issue.

He added that if a young player suffered a knock and there was a supicion of concussion, he had to be taken off. The referees, too, he felt, could be guardians in this area.

He said players had to be honest as well, and like Kevin McLoughlin, tell the medical people how they were feeling.

He didn't agree with the 70 experts view that the tackle should be taken out of rugby.

“Stop, rest, recovery has to be the procedure,” he continued. “Players need to be honest too. The rewards and enjoyment in sport can be huge, but education is vital in this area.”

Ten times All-Ireland senior medal winner, Henry Shefflin, admitted he was scared by what he heard from Dr Stewart.

He said he never suffered a concussion during his career.

He related a story about receiving a knock in the head contesting a high ball in an All-Ireland against Clare.m The move ended up in a Kilkenny goal. Everyone was excited and the knock he took went unnoticed.

However, the then Kilkenny team doctor, Dr Bill Cuddihy, noticed the tackle when viewing the match on television that evening and he spoke with Henry and made sure he received every necessary care.

That was the only real experience he had of the issue, Shefflin said.

Shefflin was the first one to mention education on the matter, and he felt awareness was huge.

Cork camogie and footballer star, Rena Buckley, winner of 16 All-Irelands, related a story about when she was a young graduate and she was team medic with a club involved in an under-16 hurling blitz.

The centre-back and star player suffered a suspected concussion in the opening game and she asked he be stood down.

He was, but when it came to the final his father, the team manager, insisted the boy be played. He was!

“What do you do in a situation like that?” she asked.

Students from Cashel Community School gave details of a project they did on concession in sport, and it was very well received.

The MC was Ger Gilroy of Newstalk.