Loreto girls run out of luck, but now all attention turn to juniors 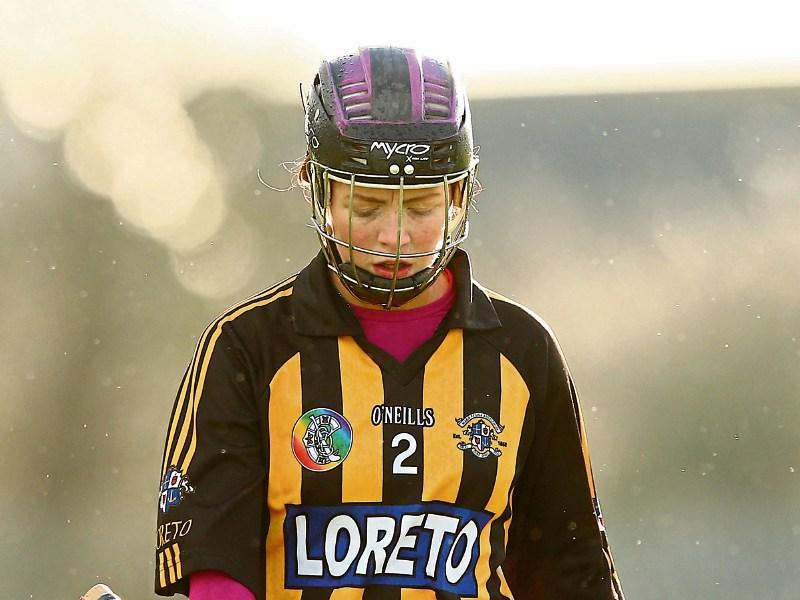 It turned out to be third time lucky for St Brigid's College, Loughrea against the Loreto Secondary School, Kilkenny in the All-Ireland camogie final.

After losing the finals of 2012 and 2013 to the Noresiders, St Brigid's claimed their first O'Neills senior crown in grand style in bitterly cold Nenagh on Saturday.

The Galway girls grabbed the game by the scruff of the neck when they got use of the wind after the break, and they enjoyed the lion's share of possession.

With four minutes remaining they looked certain to have brought their run of three defeats in the decider to an end when they led by 2-6 to 0-7.

However, the young and gutsy Loreto ladies pulled one last trick out of the bag and stormed back to leave Brigid's hanging on at the finish.

First Rachel Kelly pointed a free from 35 metres on the right for the Loreto to pierce a tight and compact winners defence for the first time in 12 minutes.

Within a minute the all action losers saw Rachel Kelly shoot a short free to Caoimhe Dowling, who posted a point from 40 metres to leave it a one score game.

The Loreto finished with a flourish with lively sub Katie Brennan and Kelly threatening from play and a free, but the Cats couldn't rescue the match and title.

“We were there to the end, but we have to conceded that the better team on the day won,” said Loreto manager, Brendan Williams.

“We have a very young and talented team, and sadly we didn't do ourselves justice today. That happens in All-Ireland finals. They have played better before, and that is why the girls are so disappointed.

“They feel they could have done better. This group has real character and we will see a different Loreto next year.”

And the immediate future could be bright too, with eight of the Loreto team on the junior side that will contest the All-Ireland final on the weekend after next.

“The hurt of today will be used to inspire in two weeks time,” Mr Williams added.

The Loreto opened full of promising with all action centre-back, Michelle Teehan, a powerful force and the instigator of many an attack. However, she suffered a hand injury after 10 minutes and had to leave the field for treatment.

While she did return shortly afterwards, the injury clearly inhibited her, thereby robbing the team of a massive force.

The losers had just taken the lead through Aoife O'Carroll after Hannah Kelly had won good possession (0-2 to 0-1). The next score was also claimed by O'Carroll after the determined Brigid's defence had twice blocked down would be shots.

A push in the back on Caoimhe Dowling in the 22nd minute led to Sophie O'Dwyer registering another score to push the losers 0-4 to 0-1 clear.

The striking thing about the Loreto's play at this time was their sharp finishing, and ability to take chances from good distances.

A fifth opportunity was taken by Rachel Kelly in the 25th minute before Rachel and Hannah Kelly worked hard to create a point scoring chance for O'Dwyer, which she took with aplomb.

Crucially, St Brigid's weren't being dominated to the extent the score would suggest. They hit back for late scores from Sarah Healy at the double; the first from play and the second after Emma Waters was fouled.

These contributions left the score at the break: Loreto 0-6, St Brigid's 0-3.

The statistics looked good for the Loreto at that stage - 8 shots at goal produced 6 scores; three girls shared in the scoring and Róisín Phelan, Teehan, Ella Moore and Aoife O'Carroll were all looking particularly strong.

St Brigid's registered five wides, two really poor ones, during that half, and Sarah Healy was their lone scorer.

The Galway girls were a different force afterwards as powerful centre-back and eventual 'player of the match', Patricia Manning and flying midfielder, Emma Reynolds gained them the upper hand.

Still it was the Loreto who created the first chance, with Niamh Deely, Rachel Kelly and Aoife O'Carroll working hard for a score, but the opportunity was missed.

St Brigid's proceeded to dominate on their own '40' and in midfield, with Sinéad Cannon, Caoimhe Garvey and Sarah Healy supplementing the influential work of the other pair mentioned.

Their first score of the half was an equalising goal in the 36th minute. Manning pumped a long free forward, and Aisling Connolly dug out possession in a crowded goal area before shooting home from the right edge of the square (1-3 to 0-6).

Sarah Spellman and Sarah Healy added to their take before the under pressure Loreto girls hit back through sub Eimear Keoghan after taking a pass from O'Carroll.

Healy picked off another score for Brigid's before their second goal arrived in the 56th minute. A shot for a point by Sarah Spellman looked to have been saved, but the ball fell in the square and Katie Manning raced in to force it over the line (2-6 to 0-7).

The Loreto, with Nicole Carter in particular but also Ruth Kent unyielding in defence, put in an almighty effort to try and save the day.

St Brigid's employed an extra defender during the closing minutes and packed the area directly in front of their goal as they hung on for a famous first success.

The Roll of Honour