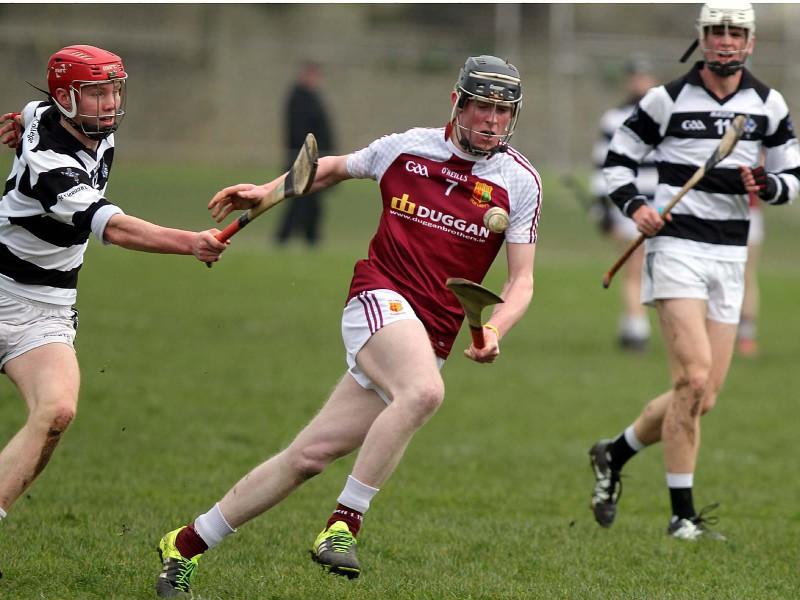 The quest for another Croke Cup is still very much alive for St Kieran’s College – but boy, did they have to work hard to make the All-Ireland final!

The reigning champions had to draw on all their experience to get the better of a physically strong Our Lady’s Templemore in a hard-fought encounter in Clonmel on Saturday.

Kieran’s, who were chasing a third crown in succession, looked to be in some peril as the Tipp side took control in midfield and closed to within two points of their rivals by the three-quarter mark.

The Templemore cause was helped no end by a superb penalty save from netminder Jack Kennedy, but just as they looked like clawing their way back into the game Kieran’s stepped up the pace.

They rattled off an unanswered 1-5 in seven minutes, a burst swelled around Joe Cuddihy’s 52nd minute goal, to race into a Semple Stadium showdown with Ardscoil Ris and a tilt at an incredible 21st title.

Colum Prendiville got them moving through the gears, firing over a stylish point on the turn from out on the wing in the 49th minute.

An Adrian Mullen free pushed the lead out to four before Connolly plundered that second goal for Kieran’s, gathering a telling Sean Carey pass and outmuscling full-back Diarmuid Ryan to swat the sliotar home.

The danger was over, but it had been a hard slog.

“That was tough,” said Kieran’s manager Liam Smith in the aftermath of Saturday’s game. “Templemore are a quality side who had a lot of passion in them, but we knew that coming here. I’m very proud of our lads - we dug it out. We got the scores when we needed them. We kept working and that got us to the final in the end.

“We had a dominant spell at the start,” he said. “Being picky you might be annoyed that we didn’t push on - we had at least two more goal chances - but they pushed at us in the second half and got to within two points.

“The boys kept working, kept sticking to the game-plan before Joe came up with a typical Joe Cuddihy finish - a great goal to put us seven points out.”

It was that incredible finish which helped Kieran’s over the end line; however, they exploded from the blocks with such force that they left Templemore heads spinning.

First off the mark thanks to Joe Cuddihy’s opening point inside 60 seconds, they raced even further ahead a minute later.

In a move that started in defence Kieran’s swept forward, Edward Moylan coming out from corner-forward to collect Darren Mullen’s diagonal clearance before jinking back to his left and into space.

Driving past his marker, Moylan dashed along the left sideline before cutting back towards the posts.

He drew full-back Diarmuid Ryan from the centre, then cleverly released a lofted hand-pass into the space Ryan had vacated - it fell just right for the in-rushing Colum Prendiville, who volleyed the sliotar first-time into the net.

It had been a blistering start by Kieran’s, but they weren’t finished yet. Templemore got off the mark thanks to Jamie Bergin (free) and Lyndon Fairbrother (their only score from play in the first half) but those points were wiped out as Kieran’s went back on the charge.

Prendiville added to his tally, intercepting a Templemore clearance and turning it back over the bar.

Pace and power played its part in their other scores; Edward Moylan got up well to win a booming Darragh Phelan puck-out before a quick look at the posts led to a score, while Michael Cody broke from defence on a lung-bursting solo to add his name to the scoresheet.

It seemed that Templemore had little to answer the Kieran’s swagger at that stage. Brian McGrath did land a brace of frees but the champions seemed relentless, pushing their way into a seven point lead by the 20th minute. Joe Connolly foraged for a loose ball and turned that into a 12th minute score, Adrian Mullen converted their first free before Prendiville notched up another point after strong play from Matt Kenny.

When Adrian Mullen tacked on his second pointed free the scoreboard read 1-8 to 0-4 in the Kilkenny side’s favour.

With 10 minutes left in the first half it simply seemed a matter of how many the Saints would lead by at the break, but Templemore weren’t finished by any length.

The Tipp side found little joy close to goal - that was due to a strong Kieran’s full-back line led by the superb Tommy Walsh – but they were able to pick off scores from further out thanks to some needless Kieran’s fouling.

With McGrath converting a free and a 65, Jamie Bergin followed up with brace of frees, cancelling out a like score from Mullen, helping Templemore to cut the gap to four by the interval (1-9 to 0-8).

Fired up by that late scoring burst, Templemore began the second half in a determined fashion. They took the game to Kieran’s, trying to use their physical strength to bulldoze a way through.

The going got tough for Kieran’s after the restart, even more so when Brian McGrath and Stephen Nolan halved the deficit with early points, but the Kilkenny school kept their composure.

It wasn’t always easy – a McGrath 65 which narrowly whistled wide could have made for a one-point game after 40 minutes – but Kieran’s stayed cool under pressure.

It took them 13 minutes to open their second half account, Sean Carey sending the white flag flying at the end of a swift move involving Adrian Mullen and Colum Prendiville. Kieran’s could have extended their lead when they were awarded a 45th minute penalty after Prendiville was hauled back in the square. It was a chance to flatten Templemore’s resolve, but Adrian Mullen’s strike was well saved by Jack Kennedy, who dived low to his left to push the sliotar out.

Fired up by that stop, the Tipp side went on the attack, the clearance eventually ending with a David O’Shea point. Rather than being six points down Templemore were just two behind – the gap remained after Edmond Delaney and Jerry Kelly traded scores – but once Kieran’s stepped on the gas they raced away to the final.

“We have a lot to work on - we’re a team in progress, but we’ve always been that way,” said Mr Smith.

“They are great lads who are willing to work. We got over this hurdle, now we have the big open space in Semple Stadium and a final against Ardscoil Ris to look forward to.”