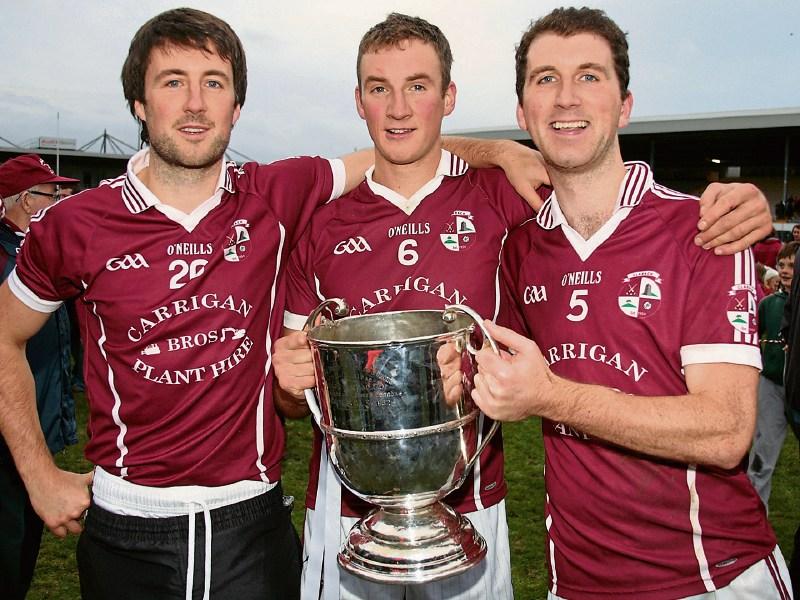 Kilkenny captain, Shane Prendergast, knows all about and fully accepts the unwritten rule. You work hard and prove yourself. You expect nothing for nothing.

And if you get a break, you have to prove yourself every single day you pull on the jersey.

He had also played with the county intermediate team in an All-Ireland final. When manager, Brian Cody, gave him the call into the squad he was 28.

By any standard he would be classed a late starter, but age didn’t diminish the desire or understanding of the massive challenge that lay ahead trying to break into the first team.

“I always believed in myself, and believed I was good enough to play with Kilkenny,” Shane insisted.

The captain has no special rights, a fact underlined when he was benched for the home National Hurling League game against Dublin after four strong showings earlier against Waterford, Tipperary, Galway and Cork. Squad rotation ruled!

He got a break into the team last season, making his debut in the championship against Wexford in Nowlan Park. An injury to the long serving Jackie Tyrrell threw the door open for him to put his name on a place in the All-Ireland semi-final and final teams.

He did, and prospered. Prendergast drove on strongly at the start of the League. He was determined to make the best of a lucky break, but the hard work wasn’t neglected.

He remembered the evening Clara chairperson, Carmel Brennan, rang and said the club was nominating him to be Kilkenny captain in 2016.

“I just said thank you very much, it is a great honour,” he offered when asked how he felt in that moment. “From then until now there hasn’t been much about it. That is the way I like it.

“It is a great honour. It is great to be following in dad’s footsteps (Paddy Prendergast, winner of senior All-Irelands in 1979, 1982 and ’83). He was captain of Kilkenny in 1987. They were unlucky not to win the All-Ireland.

“Obviously it is a great honour, but I can only concentrate on playing as best I can. I won’t be thinking about being captain. There was no big deal about it in the dressing-room.”

One of his first duties as captain was on media day at Nowlan Park when the extended sponsorship of Glanbia’s deal with the County Board was announced. Prendergast simply took it in his stride.

His view on being captain is simple. The Kilkenny squad has been “brilliantly successful; there is a super set-up and so many of the players have won multiple All-Irelands” so everyone just gets on with hurling life.

“These lads don’t need me to motivate them or anything like that,” he smiled, amused by the thought. “Just looking at Joey (Holden) last year, I don’t think he had to say a whole lot, and I don’t think he did.

“No, the lads know themselves what they are here to do. They believe in themselves.

“They have won so much, they are unbelievable competitors. They don’t need me to inspire them. We are all looking to better ourselves.”

As far as he was concerned it was business as usual in Kilkenny - you go for everything. He said he wouldn’t feel under any pressure.

“Brian wouldn’t put you under any pressure to speak or otherwise,” Shane added.

“I will take it all as it comes. I won’t get too bogged down or worried about being captain because it brings no guarantees, and it shouldn’t either.

“If you are good enough, whether you are captain or not, you will play. If you are not good enough to you won’t make the team. That is the way it has to be.”

Shane was excited about the prospects this season. There was an infectious mood in the camp, and everyone was fully determined to gain what they could from the campaigns ahead.

“Luckily enough I got to play a bit last year, and in the final against Galway too,” he recalled.

“As everyone in Kilkenny knows, that doesn’t mean you will be playing this year. You concentrate on doing as well as you can in training, and if I am lucky enough to be picked, I will play to the best of may ability.”

One wondered what it was like looking around the Kilkenny dressing-room measuring yourself against other contenders for a place on the team?

“There is no handy position to be won on the Kilkenny team,” Shane assured. “The competition is tremendous, even in training.

“If you are lucky enough to start, your ambition is to stay on the team. There are no guarantees. Absolutely!”

When he got the call last season his concentration was mainly on getting himself right, being focussed absolutely for the game ahead, the challenge.

“You can’t over-think the situation, thinking about who you are marking or things like that,” he felt. “In a match you never know who you might end up marking. Maybe by the programme you might be expected to mark this lad, but when the game starts someone else could be beside you.

“The most important thing is to concentrate on your own game. Obviously you weight up the opposition and the individual players in positions, but the main thing is to have yourself right, physically and mentally.”

Would he be relaxed before big games?

“I wouldn’t be any way superstitious, if that is what you mean,” he offered. “I wouldn’t have any special thing I would have to do before a match. The heavy training and all the group work is done.

“The main thing then before a big match is to relax and get the mind focussed so that you are ready to go when the starting whistle sounds. I wouldn’t be any way worried about it, or get bogged down about things.

“Obviously it is good to have some nerves, but the main thing is to make sure you are ready to let rip.”

Hid dad, Paddy, was always there, if needed. Shane values his opinion, insisting it “was great to have dad there”. It was important to have people to talk to, if needed, he admitted.

The life of the inter-county player is tough and demanding, but Shane Prendergast wouldn’t want to be anywhere else.

“If you love the game, and if you enjoy it, it is not as big a sacrifice to give yourself to it as some people who don’t play think,” he insisted.

“If you ask any of the guys on the Kilkenny panel if the life is a sacrifice, no one will tell you it is.

“There are huge plusses. There are no burdens as far as I am concerned,” he said.

The winning feeling, that special, special moment like in Croke Park when the final whistle in the All-Ireland final against Galway marked victory for Kilkenny made every little sacrifice worthwhile.

“During matches your mind is only on one thing,” he offered when he expanded on the point. “You never think that you made a mistake on the last ball, or you are going well or even okay. It is all about the next ball, and wanting to win it.

“You just can’t let your mind drift. That has to be your sole focus, to win ball and beat your man. You have a job in the team, and if everyone does their job, you can win. And that winning feeling, wow!”

He hopes to enjoy more of it - lots more!