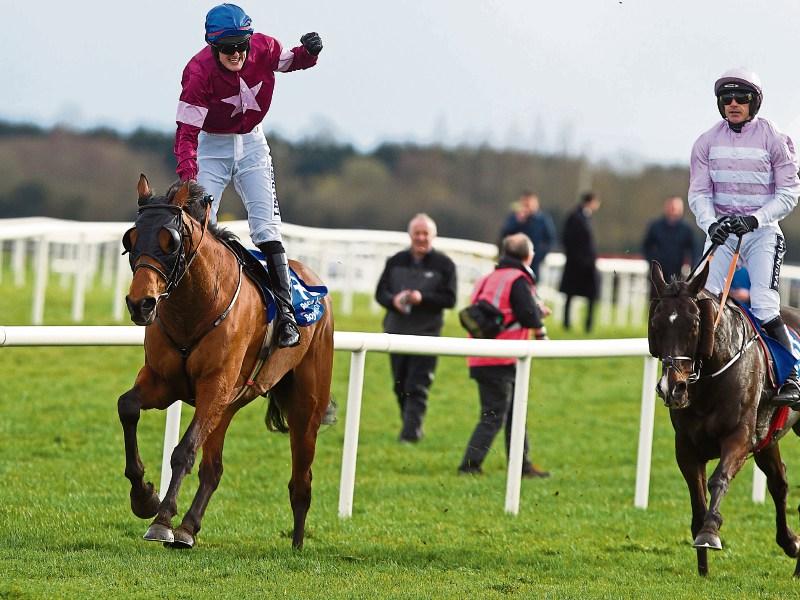 The prince among Irish national hunt trainers, Willie Mullins could yet end up king of the British scene.

Mullins has a total prize money haul in Britain of just over £1.72 million in the National Hunt trainers championship.

This leave him less than £160,000 behind current leading trainer, Paul Nicholls.

Well placed sources suggest that Mullins could bridge the gap, especially as he has some of his best horses going to Aintree.

Douvan, Black Hercules and Shaneshill could be chasing some of the top prize money too, so Mullins is not without a chance of taking the British title to go with the many he has won in Ireland.

Former great Vincent O’Brien won the British National Hunt trainers championship in 1952/53 and again the following season, which was regarded as a remarkable feat at the time.

Mullins knows his way around the winning circuit in Britain, as 15 winners at the last two Cheltenham Festivals would confirm.

Meanwhile, the renowned mud-lark Onenightidreamed captured his second Group 3 when successful in the Big Bad Bob Gladness Stakes at the Curragh on Sunday.

The 9/1 chance saw off Flight Risk to win for Tommy Stack and Wayne Lordan who had previously combined to win the race with Lolly For Dolly in 2011.

Dermot Weld and Pat Smullen enjoyed a cosy success in the Listed Alleged Stakes with Zhukova who proved much too good for Success Days and odds-on favourite Found.

The winner may reappear in the Blue Wind Stakes at Naas.

US Army Ranger jumped to the head of the ante-post betting for the Epsom Derby with his snug success in the 10f maiden for Aidan O’Brien and Ryan Moore.

The Mcgregornator got up late on to win the 5f maiden for local trainer Adrian Keatley and Gary Carroll. Jim Bolger and Kevin Manning took the 6f fillies’ maiden with Ceol An Ghra while over the same trip, the Johnny Levins-trained Mr Right beat the luckless Master Speaker to win the handicap under Ronan Whelan.

Willie Mullins and Ruby Walsh were the men in form at Limerick on Sunday where they shared a double.

Bellow Mome battled well to take the rated novice hurdle while Avant Tout had an easier time of it in the Grade 2 novice chase. The easiest winner of the weekend came in the shape of Without Limites who strolled to a 49-length success in the Listed bumper for Crossabeg, County Wexford trainer Liz Doyle and Finny Maguire.

Paddy Neville, who trains in Askeaton, won the handicap chase with Rightville Boy, another winner for Andrew Lynch. However, former champion jockey, Barry Geraghty and trainer Tony Martin found themselves in hot water with the Stewards following the 2m handicap hurdle.

Barry Cash made all the running on Velocity Boy to win the race for trainer Willie Murphy, but it was the running and riding of the second horse home, Noble Emperor that caught the attention of the Stewards.

They suspended Geraghty for 30 days and Martin was fined €3,000. Noble Emperor was banned for racing for 60 days.

Pat Smullen continues to enjoy great success on the all-weather at Dundalk and he notched up two more winners at the County Louth venue on Friday.

He won the 5f maiden on the Dermot Weld-trained 5/4 favourite Tilly Trotter and followed up on David Marnane’s Jamesie, an 11/4 joint-favourite, in the 7f handicap.

However, the champion jockey had to share the riding honours with Seamus Heffernan who rode two winners for Aidan O’Brien.

Newcomer Long Island Sound got the pair off the mark in the 8f maiden and the smart Washington DC completed the haul when taking the Listed 7f race in convincing fashion.

Two young apprentices got on the score sheet with Oisin Orr combining with Bangor, County Down trainer Louise Cannon to win the 7f handicap and Tom Madden landing the 12f handicap on the now seven-time course winner Shake The Bucket, trained by his father, Niall.

David Wachman and Wayne Lordan also paid a visit to the winners’ enclosure as 4/5 favourite Posing just came out on top in the 10f maiden.

Bryan Cooper was the man in form at Clonmel on Thursday where he shared winners with Irish Grand National hero Mouse Morris and Gordon Elliott.

Alamein scored an 18-length success in the opening maiden hurdle for the locally-based Morris and Bright New Dawn completed the young riders brace with a 12-length victory in the Suir Valley Chase for Elliott.

Sheila Lavery, a near neighbour of Elliott in Summerhill, County Meath, saddled Laid Back Luke to win the 2m3f maiden hurdle. The winner was ridden by Robbie Colgan.

Shane Shortall did the steering as the Pat Fahy-trained Ancient Highway won the handicap hurdle over the same distance while Andrew Lynch guided Owennacurra Milan to success in the beginners’ chase for Macroom trainer Louise Hallahan.

Kildare trainers captured the final two races on the card with Donore’s Peter Maher taking the opportunity handicap chase with the Ambrose McCurtin-ridden Mtada Supreme while Jessica and Kate Harrington combined to win the bumper with Thirsty Work.

Rogue Angel, successful in the Kerry National at Listowel last September, landed one of the biggest prizes in National Hunt racing when winning the BoyleSports Irish Grand National at Fairyhouse on Easter Monday.

Trained by Mouse Morris and ridden by Ger Fox, the eight-year-old was headed over the final fence by Bless The Wings but battled back bravely to deny Gordon Elliott and Ruby Walsh by a short-head.

Owner JP McManus saw his colours carried to success in the first two races on the card.

Slowmotion, trained by Aidan O’Brien and ridden by Barry Geraghty, ran out the impressive winner of the Grade 2 juvenile hurdle while the local rider was also in the saddle as Sutton Place overcame a mistake at the final flight to take the Grade 2 novice hurdle for Gordon Elliott.

Dan Skelton and his brother Harry combined to win the Grade 2 hurdle with Value At Risk, who ran out a good winner and may return to Ireland later in the month for the Punchestown Festival.

There was a second British-trained winner as Emily Gray took the Grade 3 mares’ chase for Kim Bailey and Jonathan Burke. To add to his big race win, Mouse Morris also took the 2m6f handicap hurdle with Just Cause who was ridden by Jack Kennedy while On The Shannon took the handicap chase for Oliver McKiernan and amateur rider Barry Brown.

Willie Mullins drew a blank at the course on Easter Sunday but he landed the bumper with Blow By Blow, who was a good winner under Patrick Mullins.