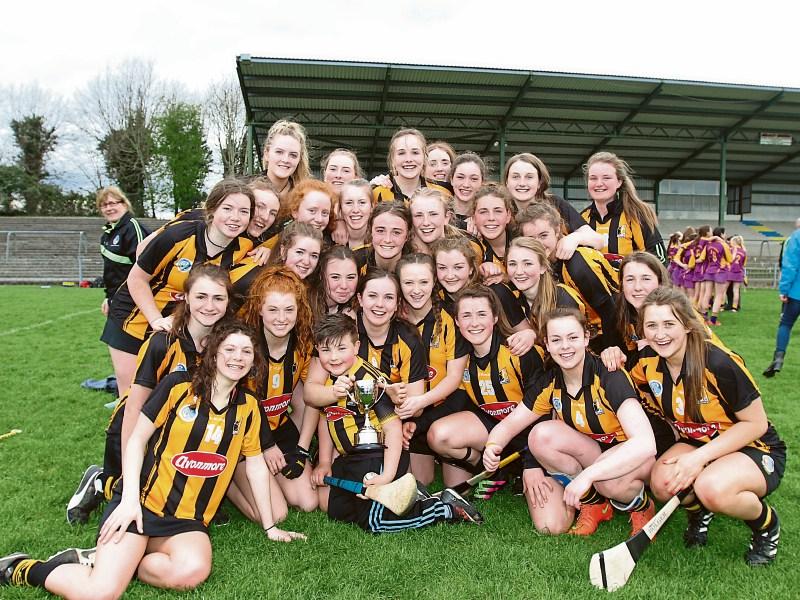 Danielle Morrissey grabbed 11 points as the Kilkenny under-16 team secured the Leinster ‘A’ camogie title with a win over Dublin in Banagher on Sunday.

Dublin raced out of traps and opened the scoring with a Ciara Holland point.

Kilkenny hit back with three points from Clara Hendrick, Eimear Farrell and Morrissey to race 0-4 to 0-2 clear.

Hollyn Kennedy stopped the rot for the Metropolitans with a point after an initial Alix Buckley shot dropped short and was brilliantly saved by Kilkenny net minder, Leah Dunne.

Kilkenny hit back brilliantly, shooting a devastating 1-3 without reply.

Danielle Morrissey stated the run with a free from 50 metres in the 16th minute. Eimear Farrell then got in for the first goal when she latched on to a Lisa Donnelly pass to tap home from the edge of the small square.

Lisa Donnelly tapped over a point before Suzie Aylward added another to put the winners 1-7 to 0-3 ahead after 22 minutes.

Dublin bounced back for a Ciara Holland point (free). The opposition replied with two Danielle Morrissey pointed frees to make it 1-9 to 0-4.

Dublin then got in for a goal after Alix Buckley latched on to a long dropping ball into the Kilkenny square (1-9 to 1-4). Morrissey responded for Kilkenny to close out the first half scoring - 1-10 to 1-4.

The Noresiders burst into action at the start of the new half. They shot 1-2 on the bounce.

Danielle Morrissey first landed a long range point from play. Caroline Kennedy then got in for Kilkenny’s second goal.

Aoife Doyle slipped over a point to put Kilkenny 2-12 to 1-4 ahead.

Credit to Dublin, they never gave up . They hit back for two goals through Ciara Holland and Sinead Wylde (2-12 to 3-4).

Kilkenny regained their composure and put a scoring run of 1-6 together. Danielle Morrissey lashed over four points.

Aoife Doyle got in on the act when shooting a well taken point in the 50th minute. Rachel Kelly, who was just introduced as a sub, slipped over a well taken point before Eimear Farrell then put the game to bed in the 52nd minute when she took a Maria Brennan pass before slamming the ball into the net (3-18 to 3-4 ). It was game over!

Kilkenny can head into the All-Ireland campaign in July in good spirits. In that series Waterford are first up away on July 8.