Local pride at stake in the 'Battle of Leinster' 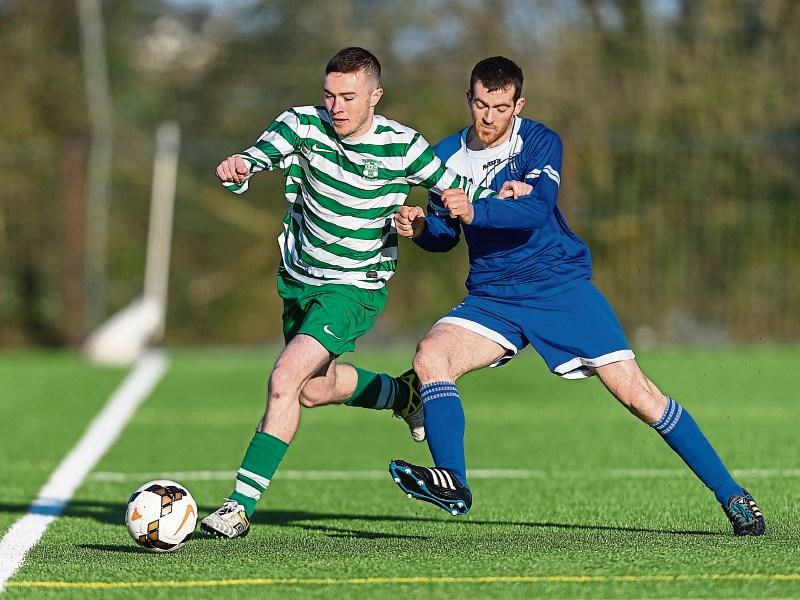 Local bragging rights and a spot in the province’s biggest competition are the glittering prizes two Kilkenny clubs are eyeing up this weekend.

The Kells Road will be the venue for a clash of two footballing juggernauts on Sunday as Evergreen play host to Thomastown United in a battle for local supremacy.

And, more importantly than county pride, the winners will earn a massive reward - a place in the Leinster Junior Cup final.

Both sides warmed up for Sunday’s game (kick-off 11am) in style, scoring good wins in their respective McCalmont Cup semi-finals. Thomastown were first to go through, needing extra-time to do so, but their hard work paid off in the end.

“There’s no rocket science to it,” said joint manager Steve Walsh when asked about the key to their success. “It’s all about work-rate, determination and working for each other on the pitch.”

While their hopes of a successful defence of their Premier Division title have gone, United have been more than impressive outside of the league this season.

“We started the season without our two centre-halves, Derek (Brennan) and C.J. (Browne),” said Walsh. “We played about a half-dozen games without the lads and even when they came back it took them a while to get their fitness up. It’s only in the last two months or so that our form has picked up again.

“It’s not just been that way in the Leinster Junior Cup,” he added. “We were within a penalty of drawing a League of Ireland team in the Leinster Senior Cup this season. We won five games in that competition, going as far if not further than any other Kilkenny league winner.

“It was just unfortunate that we were missing the players we were at the start of the season. I think we would be a lot closer to Evergreen in the Premier Division title race if we hadn’t been without them.”

The mouth-watering tie was sealed when the teams were paired against each other in the draw - Crumlin United and FAI Junior Cup finalists Sheriff are in the other semi-final - but there were mixed feelings on the outcome of the draw.

“I was hoping we wouldn’t get Evergreen as we like playing outside teams,” said Walsh. “But, once the draw was made we were happy enough. We’ve been quiet about it; maybe more of the talk is about Evergreen for this game, so we’re going in under the radar a little. The pressure is on them - they’ve won all the local trophies and they’re so keen to win a provincial title.

“However, we want it every bit as much as them,” he added. “That’s certain, as is the fact there won’t be anything between the teams on Sunday. It’ll be a close game.”

That anticipation of a tight encounter is just what their rivals are expecting this weekend.

“Thomastown and ourselves have gone head to head over the last two seasons,” said Evergreen’s player/manager Packie Holden. “The games have been quite close. There’s barely been a kick of a ball between the teams. I can’t imagine it being any different this time.”

And that close game should bring a bumper attendance to Evergreen Park.

“There should be a big crowd for the game,” he said. “It’s a first for both teams and a first for Kilkenny football to have two teams come this far in the competition, so it should be a good occasion.”

Like Thomastown, Evergreen have recorded some impressive results in Leinster this season, but one game stands about above all others for Holden.

“The Collinstown game - without a doubt,” he said, recalling their last 16 extra-time win. “As defending champions they were a class outfit, full of international players, but we played quite well and deserved the result. It’s going to take a similar performance to get over Thomastown. We’ll have to be at our best to get past them.”

Unlike United, Holden was a little happier with the draw.

“To be honest, I was thankful we didn’t get Sheriff,” he said with a smile.

“It’s a local derby, which takes the unknown quantity out of it and we’re at home which is always a bonus. We know Thomastown are a fine side.

“It’ll be nip and tuck and I don’t expect anything less than a tough game,” he finished. “The team who performs the best will win.”