'Green machine rolls on and on! 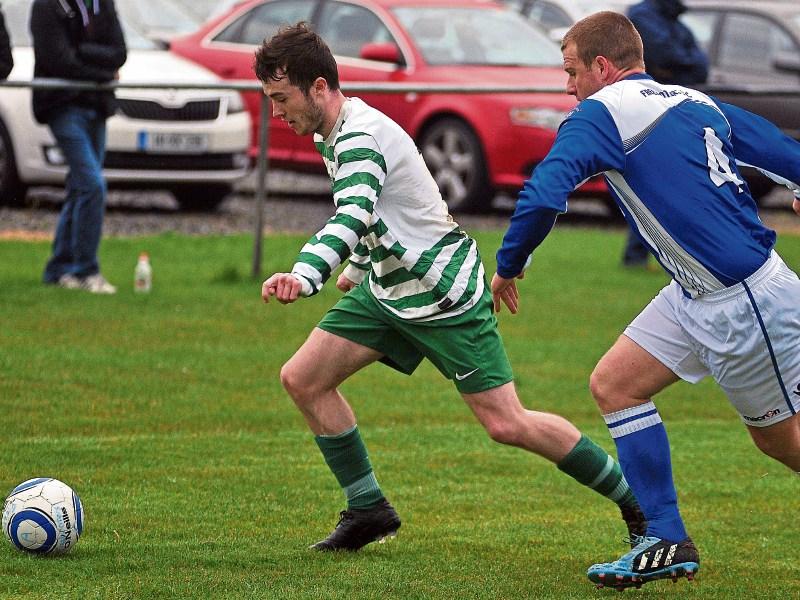 The good times show no sign of slowing down this season for Evergreen A.

The boys from the Kells Road kept up their chase for a domestic treble and earned some city bragging rights when they saw off old foes Freebooters A and marched into the McCalmont Cup final.

The Maher Shield is already in the trophy cabinet, where it will be joined soon by the Premier Division title. Now the quest to add the McCalmont Cup, a title they won last season, has gathered pace with the final just weeks away.

Just like their previous success, Evergreen trod a familiar path to victory. A blast of goals did for the Blues in the end but, unlike the Maher Shield decider, this time they made their rivals work for a breakthrough.

Last time they met in Derdimus Evergreen wasted little time in stamping their authority on the game - they took just eight minutes to net the first goal. They tried to bag another quick opener, Daragh Walshe picking up Ben Hickey’s centred pass, but his 15th minute shot was capably dealt with by Donal Brennan.

Freebooters weren’t content to sit back and defend for the full game, as they showed in the opening quarter. Pressing Evergreen back into their own half the Blues almost capitalised when Daragh Walshe’s intended back-pass from the halfway line fell short.

Nathan West was on to it in a flash, seizing possession and rolling it across the face of the box for the incoming Cian Loy, but he lashed his shot over the bar.

The game resembled something of a chess battle after that, with both sides almost waiting for the other to make their move, before the deadlock was finally broken on the half hour.

The goal wasn’t without a whiff of controversy, at least as far as Freebooters were concerned. Ben Hickey started the move, taking a return pass from a throw-in and delivering a teasing cross from the right.

Niall Andrews was in the right place at the right time, snapping up the breaking ball on the edge of the box and smashing home an unstoppable shot.

The Blues were adamant that Daragh Walshe had impeded goalkeeper Donal Brennan’s view as the ball zipped in, but their protests fell on deaf ears.

The Blues were stirred into action by that goal and almost made an instant reply. Picking up possession Paddy Cahill stormed into the Evergreen box and fired off a testing shot, but Holden got down smartly to his left to parry the strike before safely gathering the rebound.

The tempo dropped back after that, but Andrews could have doubled his and Evergreen’s tally six minutes before the break. The Evergreen skipper raced into the box to meet Chris Whearty’s vicious corner at the near post, but he glanced his header a whisker wide of the far post.

That would prove to be Andrews’ last major involvement, as injury cut his evening short within minutes.

Losing their defensive mainstay didn’t trouble Evergreen too greatly, but they had to withstand some late Freebooters pressure. The pacy West proved to be the biggest handful, almost nicking the ball away from Holden as he dealt with a back-pass, but the netminder managed to get the ball to safety.

The new half was only two minutes old when Evergreen took a big step towards the final. With Ben Hickey and Brian Jordan piling on the pressure ’Booters were pegged back in their own half. The Blues tried to clear their lines, but were caught when Chris Whearty threaded a fine ball through their defence. Daragh Walshe sprang the offside trap, pausing only to beat Donal Brennan with a low drive.

Freebooters were stung by that strike but made the perfect reply when they pulled a goal back within minutes, Cian Loy getting a flick on a teasing free to guide it past the Evergreen defence.

At that stage it seemed game on again, but ’Booters were hurt when netminder Brennan limped out of the game, forcing Vinny Wallace to don the gloves for the last 25 minutes.

That’s not to say they didn’t have a chance to draw level. Nathan West seemed odds-on to score when he chased down Jack Poyntz’s 70th minute diagonal pass and raced through but the challenging Robbie Quan managed to get something on the ball, enough to send it spinning into Holden’s arms.

That was as close as Freebooters would come to turning the game their way as, within minutes, Evergreen doubled their lead. Daragh Walshe bagged his second of the evening, converting an 82nd minute spot kick after sub Jamie Owens was fouled in the box.

Finishing with a flourish, Evergreen added a fourth in stoppage time. Sean Barcoe was the creator, breaking down the right before crossing for Simon Burke to add a lofted finish.