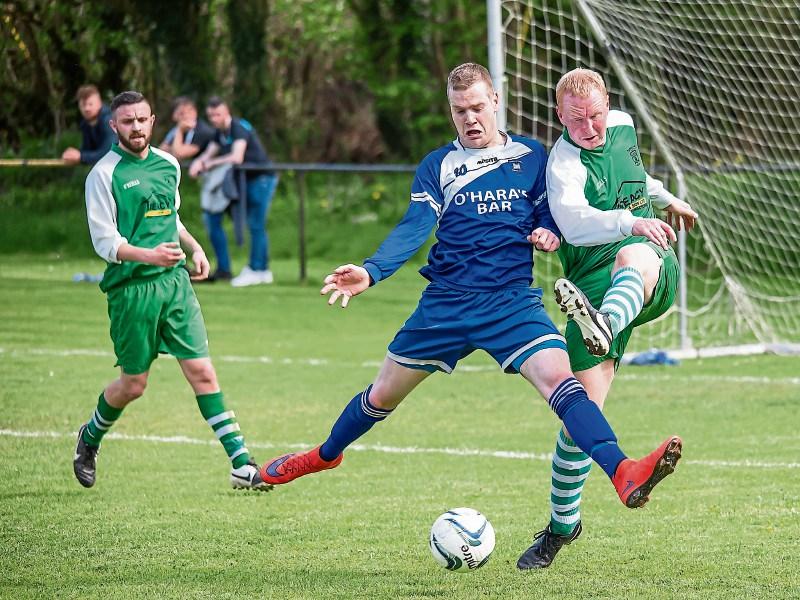 Scoring a goal with the last act of normal time – then scoring two more with virtually the last kicks of two halves of extra-time. Thomastown United just love drama, don’t they?

The outgoing Premier Division champions made sure of at least one shot at a piece of season-ending silverware (although they have their eyes on another in the form of the Leinster Junior Cup) when they saw off ten-man Evergreen B to book a spot in the McCalmont Cup final on a glorious Sunday afternoon in Derdimus.

Mind you, they left it late – very, very late!

The game seemed to have slipped from Thomastown’s grasp when, despite huffing and puffing, they still found themselves trailing to Noah Canty’s early goal as the game ticked into the dying seconds of injury-time.

Going for broke, United gave it one last throw of the dice. A Mick O’Neill corner was repelled by Evergreen, but the all came straight back to the kicker.

Knowing time was against his side, O’Neill swung the ball back from whence it came. Steven Connolly met it with a powerful header, but it looked like their hopes were dashed when netminder Philly Johnston managed to swat the ball away from under the bar.

United weren’t finished – Dessie Walsh stormed in, getting his head to the dropping ball and driving it home, much to the delight of the Grennan faithful.

It was a hard blow for Evergreen to take. No sooner did they kick off than the final whistle sounded.

The city side had battled away despite being a man down for more than half an hour, but their resolve crumbled as the game ticked into extra-time. Revitalised by that late goal Thomastown used their extra man to deadly effect. They had a great chance to take the lead when, in the 96th minute, Andy Kavanagh made room on the right to fire in a cross that Connolly met with a glancing header, but he couldn’t keep his effort on target.

Evergreen survived that scare, but were flattened when the ’Town went ahead on the stroke of half-time. Connolly was the provider this time, dropping deep to win possession and string a pass on to O’Neill. A quick spin on the edge of the box saw O’Neill gain a yard’s space from his marker, before lashing an unstoppable shot to the net.

Evergreen, who were out on their feet by then, never recovered.

It was all so different for the city side early on, not least as they were practically gifted the opening goal after just 19 minutes. With a solid row across the back and in midfield frustrating Thomastown, Evergreen kept a high line that had United on their heels at times.

The tactic paid off, as Matthew Houlihan proved when he chased down a back-pass to Paul Dunne. The Thomastown netminder tried to cleverly play his way out of trouble, but his attempted jink cannoned off the Evergreen striker and fell kindly for Canty, who couldn’t miss when presented with the open goal.

Stung into action, Thomastown almost replied in an instant. Paul Dempsey put his side on the attack when he launched the ball forward from the kick-off. Steven Connolly outmuscled his man to win possession, but Philly Johnston was there to make a vital save at his near post.

Despite that near-miss Evergreen were composed in their ranks, their midfield of John Brett, Sammy Johnston and David Roche proving tough to break down. Johnston almost provided the assist for a second goal when his long range 25th minute free slipped from Dunne’s grasp and fell at the feet of Houlihan, but the netminder managed to recover the loose ball in the nick of time.

Thomastown refused to panic, continuing to work hard for a way back into the game. They nearly found it too in the closing stages of the half – not once, but twice!

Dessie Walsh made a nuisance of himself in the box and almost nabbed an equaliser in the 40th minute. Losing his man he managed to get on the end of Mick O’Neill’s corner, but his towering header was just over the bar.

He had another pop at the target just two minutes later. Again he used his head, dashing in at the back post to meet Kevin O’Neill’s menacing cross with a stooping header, but the ball finished just outside the post.

The pressure continued into the second half, but for all their efforts Thomastown still couldn’t find a way through. Once more Dessie Walsh was at the heart of a great early second half chance, beating his team-mate Steven Connolly in a jump for Mick O’Neill’s 51st minute cross, but Walsh’s header clipped the Evergreen crossbar.

The Evergreen goal may have led a charmed life with that chance, but their luck took a turn for the worse when Mark Cashin was dismissed for a second yellow card offence just a few minutes later.

With Thomastown turning the screw – Kevin O’Neill and sub Eoin Manning found acres of space in which to roam down the wing – it looked like an equaliser would come, but still Evergreen held firm.

And, when the defence was breached, their netminder came to the rescue. Mick O’Neill seemed destined to score when, with his back to goal, he controlled O’Neill’s 61st minute cross, swivelled and let fly a stunning drive, but Philly Johnston broke Thomastown hearts with a super save from point blank range.

Thomastown shrugged off that miss but, although they pushed on, they still couldn’t get that goal they craved. The introduction of Mark Connick helped Evergreen, as his pace helped keep the United defence busy.

Thomastown may have had their hands full at the back, but they still had time to keep looking for that equaliser. That man Walsh – again! – thought he had found it when, in the 89th minute, he swept the ball home from a Derek Brennan cross, but his cheers were cut short by the offside flag.

At that stage it looked like curtains for United – but the rescue act was minutes away. Walsh’s last gasp leveller revived their efforts before Mick O’Neill shot them into that extra-time lead.

Having waited more than 90 minutes for one goal, the winners found three in an action-packed 20 minutes. Sub Danny Monks put the icing on the cake in the 110th minute collecting Eoin Manning’s cushioned pass before slipping it under the outrushing Johnston to complete that dramatic result.