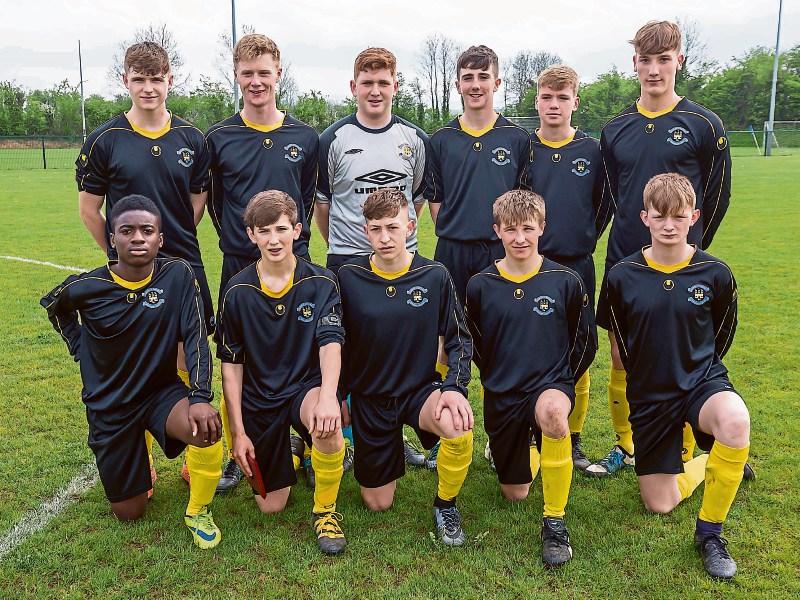 The performances of a band of champion Foxes may have been the driving inspiration for a team of hungry Cats.

The Kilkenny & District League’s under-16 sized made the football community sit up and take notice when they stunned kingpins the DDSL with a stunning display on Sunday.

The Cats gave everything and more in an 80-minute performance that saw them upset the odds-on favourites and roar their way into the All-Ireland final.

And, after the game, the smile on the face of their manager Ronnie Grace said it all.

“As I said to the players going into the game, look at Leicester City,” he said with pride. “They were 5,000/1 before the start of the season. No-one gave them a chance and look at how they finished up. That’s the way we’re going out here for this game.

“Dublin came here with a belief they only had to turn up to beat us,” continued Grace, referring to the heavy loss his side suffered at the hands of the Dubs in the group stage.

“I told the players they wouldn’t beat us like that again. I knew they’d put in the effort they did and work as hard as they did. You can’t ask for any more than that, can you?”

It was that hard work - and then some - that saw Kilkenny boss the DDSL in all sectors. The young Cats were like tigers as they roamed around the Goresbridge pitch, snapping at Dublin heels at every turn. A healthy mix of tough tackling and composed play did the trick, unsettling the visitors.

“We played to our strengths,” said Grace.

“We made things suit our game and it worked. We knew they’d come down confident after the thumping they gave us in the group stages, so it was our turn to change things around.

“You could see it in the attitude of the players - there were some tremendous performances out there,” the manager added. “You couldn’t pick a man who did more than anyone else there - they were marvellous.”

The memories of that loss to Dublin - an 8-0 hiding in Abbottstown - really hurt Kilkenny. It provided the perfect spur in terms of motivating the team, who made a spectacular start to the encounter.

The game was little over a minute old when Justin Cahill launched a free-kick from the half-way line into the Dublin box. The delivery sailed over the heads of a mass of bodies - and over the grasp of netminder Daniel Kearney, who was powerless to stop the ball from dropping in under his crossbar.

Kilkenny confidence was soaring, but the Dubs quickly brought them back to earth with a bump. The lead proved short-lived as the visitors quickly slammed their way back to parity, Charlie Barry drilling a menacing ninth minute free-kick past the Kilkenny wall and just inside Dean Mason’s right hand post.

At that stage, with Dublin posing a serious threat in attack, you feared for Kilkenny. However, the defence became rock-solid, doing their best to cope with the dangerous trio of Marcel Kuty, Jordan Adeyomo and J.J. Akinola.

They had their hands full though, as Dublin pressed for a lead goal. Adeyomo sent a menacing 17th minute shot whistling over the bar before Kuty forced a good save from Mason, the goalkeeper diving to his right to push the 19th minute strike around the post for a corner.

Gradually, Kilkenny began to turn things their way. George Murphy and Justin Cahill toiled throughout in midfield, while Divine Amaukwa made a nuisance of himself, chasing down every Dublin player and forcing them into rushed passes and out of their comfort zone.

After that, Kilkenny began to turn the pressure into attacking chances. They had a great opportunity to go back in front just before the half hour. Ciaran Brennan used his pace to chase down a long ball and bear down on goal, but Kearney raced from his line to smother the shot.

That was the fright Dublin needed to get their game going forward. They almost made an instant response, as Kuty’s right wing cross bounced nicely for the incoming Adeyomo, but his acrobatic overhead effort sailed over the bar.

The Dubs were being squeezed out of things in midfield, but found enough space to trouble their hosts in the closing stages of the half. Akinola did well to get on the end of Kuty’s clever 35th minute flick and unleash a low shot from the right but Mason got down smartly to make the save.

The final say before the break went to the hosts. Having started the half so well Justin Cahill almost ended it in similar style when he latched on to a loose ball and unleashed a long range strike.

For a split-second it seemed as if the net was beckoning, but Kearney was relieved to see the shot flash past the outside of his right post.

The second half started in a cagier fashion, but Kilkenny held their shape, waiting for the right moment to pounce.

And, when it arrived in the 54th minute, Kilkenny duly delivered. Justin Cahill held up play in the centre circle and then clipped a clever ball forward to Ciaran Brennan. Splitting the central defenders, Brennan was off in a flash. Racing after the ball he sprinted through, pausing only to slam an unstoppable shot beyond Daniel Kearney.

The goal was met with a huge roar from the Kilkenny ranks, who swelled in confidence. The DDSL struggled to show the same attacking prowess they had enjoyed in the first half – Adeyomo and Akinola were taken off at the break, which hampered their efforts.

They almost leaked another goal to the Cats before the hour, when Brennan raced on to another flick-on, but this time Kearney was quickly off his line to thwart the danger.

Kilkenny were firing on all cylinders now, determined to get more goals. With 10 minutes to go they found the third goal they craved, sub Mark Power gathering George Murphy’s threaded pass and letting Kearney make his move before rattling a shot past the netminder.

If Kilkenny were in dreamland then, they were in heaven just two minutes later after George Murphy was fouled in the box. Ciaran Brennan took the spot kick and made no mistake, hammering his effort past Kearney and, with it, giving Kilkenny their place in the All-Ireland final.