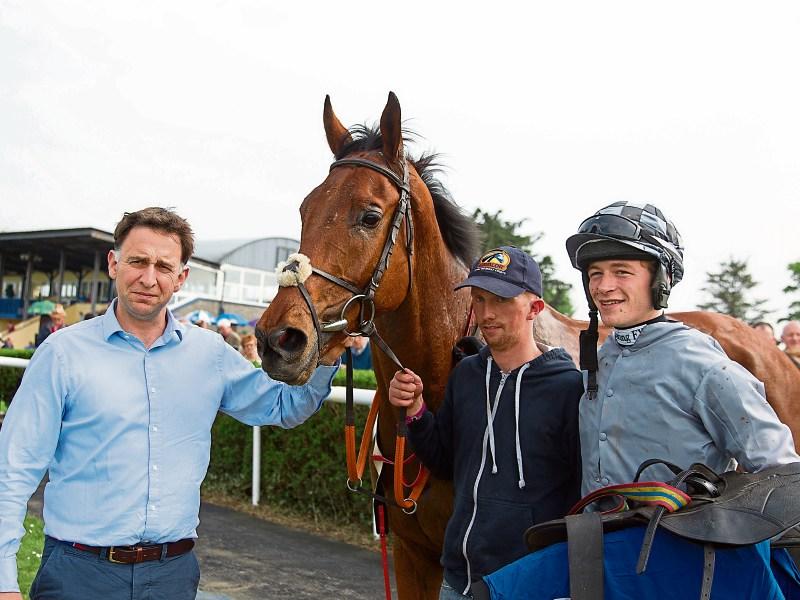 The duo chased home Rawnaq, who was formerly trained in Ireland by Matthew Smith, in the $200,000 event.

Shaneshill, the mount of Danny Mullins, raced in third place for most of the race as Nichols Canyon led or ran second under Ruby Walsh, laid down a determined challenge to Rawnaq but just failed by a neck.

It was a first venture into American racing for Mullins who said: “I was absolutely delighted with the efforts of the racecourse staff who made the ground just right. Nichols Canyon did not jump that well and maybe wasn’t best suited by going left-handed, while Shaneshill ran a big race.

“However, for both horses this was probably one race too many, but we look forward to returning next year.”

Pat Smullen landed two more winners at the first meeting of 2016 at Roscommon on Monday evening.

The champion jockey got the Dermot Weld-trained 3/1 shot Alishan up close home to win the opening maiden from the gambled-on 5/4 favourite Admodum and followed up on the Peter Fahey-trained Queen Alphabet who justified her position at the head of the market for the fillies’ maiden with a narrow success over Grey Sky Blue at odds of 2/1.

She won by a neck and another to score by the same margin was Johnny Murtagh’s Full Court Press who won the 10f handicap under Connor King.

Ger Lyons and Gary Carroll combined to land the 12f handicap with Synopsis, a well-supported 6/1 chance. The bumper went to Gordon Elliott’s Blood Crazed Tiger who won well in the hands of Jamie Codd.

The 10/11 favourite was ridden by Davy Russell and was his trainer’s first winner since Prosperity Square won the Ingoldsby Handicap Chase at Punchestown in October, 2014.

The pair were on the mark with 8/1 shot Shanghai Beauty who got up in the dying strides to land the 5f handicap and followed up 30 minutes later when Evening hush, a 3/1 chance, ran away with the fillies’ maiden.

Her nine and a half-length success was the widest of the session and in contrast, Fainleog, trained in Stoneyford, County Kilkenny by Ann-Marie O’Shea and ridden by her husband Adrian, had just a head to spare over A Likely Story in the 5f maiden.

There were half-length victories for Jessica Harrington’s Camile, who won the 9f handicap under Colm O’Donoghue and Youceeyoucee who landed the extended 7f maiden for Mallow trainer Susan Finn and Wayne Lordan.

Tom Foley teamed up with Chris Hayes to win the opening division of the Tipperary Handicap with 8/1 shot Whippers Dream and at odds of 33/1, Miss Ballygally gave Coolaney, County Sligo trainer Mark McNiff his second winner in five days when landing the second leg of the same race under Conor Hoban.

Aidan Howard was delighted to see the rain come for End Play and the three-year-old made no mistake in the concluding handicap under Leigh Roche.

He landed both divisions of the 2m4f handicap hurdle, taking the opening leg with the Barry Geraghty-ridden Scoir Mear and following up with Spider Web who was partnered by Mark Walsh.

And for good measure, Mullins’ son David was also on the mark as he partnered the Henry de Bromhead-trained Conrad Hastings to success in the opening maiden hurdle.

Winter Magic provided Jimmy Mangan and Davy Russell with a winner when he landed the handicap chase at odds of 6/1 and an even better fancied winner was Hurricane Ben who took the hunters’ chase for another Cork trainer, James Sheehan and Ciaran Fennessy.

The mares’ bumper went to Miss Eyecatcher who was ridden for Cappoquin, County Waterford trainer Roger McGrath by Finny Maguire. James Motherway, who trains at Cloyne, County Cork and Johnny Barry won the finale with Westendorf.

Aidan O’Brien enjoyed yet another special day on Sunday and won both feature races at Navan.

He landed the first running of the Listed Coolmore Stud Power Stakes with the impressive Washington DC and followed up with success in the Group 3 Coolmore Vintage Crop Stakes with Bondi Beach who made heavy weather of beating Toe The Line at odds of 1/9 favourite.

Seamus Heffernan rode both winners but the trainer’s son Donnacha was in the saddle as Immortal Bridge took the 13f maiden to complete a treble for the Ballydoyle maestro.

Ger Lyons and Colin Keane teamed up to win the 5f handicap with Ardhoomey and over the same trip, Patrick Prendergast’s Callender won the maiden under Chris Hayes.

Kieren Fallon is eyeing up a big weekend at the Curragh. He was on the mark for trainer Tony Martin with Laganore in the fillies’ handicap.

Jessica Harrington and Colm O’Donoghue took the 10f handicap with Hint Of Frost while the 8f maiden went to New Classicism, trained by Willie McCreery and ridden by Billy Lee.

Many of Ireland’s leading Flat trainers were joined by a host of racecourse managers for the launch of the 2016 Irish Flat Racing Season at the Curragh Racecourse early last week.

At a breakfast morning hosted by Horse Racing Ireland, Dermot Weld, Kevin Prendergast and Willie McCreery spoke to the press as their horses worked on the gallops while Jim Bolger, Aidan O’Brien, Ger Lyons, Johnny Murtagh, Tracey Collins, Adrian Keatley and Johnny Feane later outlined their prospects for the season. The 2016 season features a number of enhancements to the Irish Flat Black Type Programme with both the Curragh Cup and the Minstrel Stakes upgraded to Group 2, while the Flame Of Tara Stakes becomes a Group 3 race.

Her Majesty’s Plate at Down Royal was won by Order Of St George in 2015 and will be run as a Listed race for the first time this season.

Navan will host the inaugural running of the Listed Coolmore Stud Power Stakes next Sunday. Total prize-money for the 2016 Flat season is over €29 million.

O’Callaghan said: “She is so laid back and doesn’t show you much at home. She hasn’t fully come in her coat and I expect her to improve again.

“She is a big filly with lots of scope. She has the Guineas ahead of her and possibly the Coronation Stakes at Royal Ascot but if I had to pick a race that is made for her it would be the Coolmore Fastnet Rock Matron Stakes at Leopardstown on Longines Irish Champions Weekend.”

Of his Tattersalls Ireland 2,000 Guineas contender, Blue De Vega, O’Callaghan commented: “He came out of the Tetrarch Stakes at the Curragh very well and will improve quite a bit.