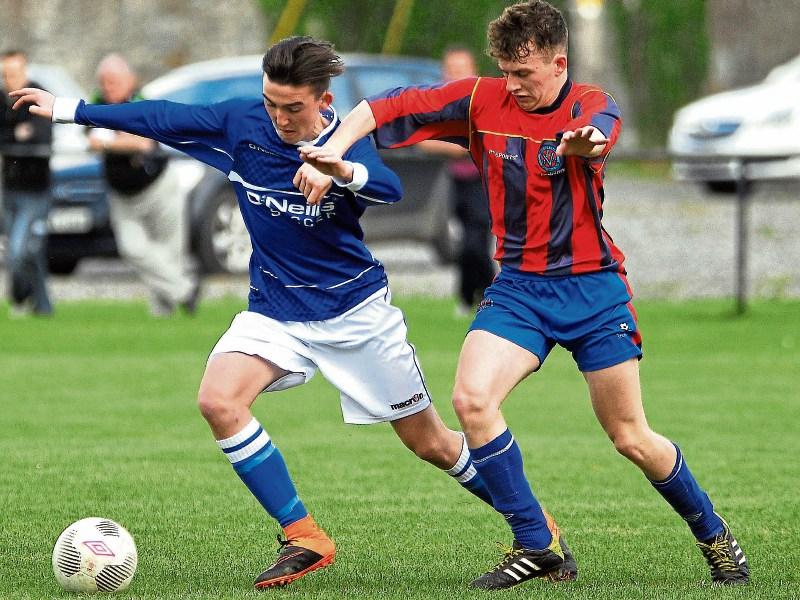 A swift second half scoring blitz saw the all-conquering Freebooters Youths complete their season with a treble treat.

Three goals in four minutes helped the Blues bag the Buckley Youths’ Cup at a sunny Derdimus on Saturday. With the league and Shield titles already safely secured, the result completed a clean sweep for Sean Doyle’s side.

However, they had to shake themselves up a little after opponents Ormonde Villa shocked the Blues with Robbie O’Driscoll’s header on the stroke of half-time.

Roused back into action, ’Booters wasted little time in reasserting their lead in the second half. Mark O’Neill handed them the advantage, and in some style, when he unleashed a long range 48th minute free-kick that flew over the wall and crashed into the net off Richie Stapleton’s left post.

Ormonde Villa were just recovering from that goal when they conceded another. Controlling the ball on the edge of the box, Cian Loy made space to shoot. Stapleton got his hands to the ball, but couldn’t stop the powerful strike from curling into the net.

That goal spurred on Freebooters, but they weren’t finished yet. The new half was barely seven minutes old when they all but made the Cup theirs. O’Neill started the move, firing in a raking free-kick into a packed box. Joe Banville did the prep work, knocking a diagonal pass down into the path of Ryan Maguire, who couldn’t miss.

That goal flurry was harsh on a Villa side who had more than played their part in an entertaining first half. Although their goalkeeper Stapleton was the first into action – he made a super save to deny John McEvoy from opening the scoring after he dashed on to Banville’s excellent 12th minute pull-back – they steadily grew into the game.

With Charlie Deegan pulling the strings in midfield Ormonde Villa began to force their game on Freebooters. He almost provided an opening for Finn Dowling, splitting the Blues defence with a great ball, but Declan Wall’s last ditch tackle prevented Dowling from opening the scoring.

Deegan was at the heart of another great chance on 20 minutes. Once more he teed the ball up for a colleague, Ian Clifford the benefactor. Given time on the right of the box Clifford seemed to be in two minds – lob or blast the ball. In the end his shot was comfortably dealt with by Steven Scallon.

Ormonde Villa were impressive during this spell, but should have made their efforts count. They had a gilt-edged chance to take a 22nd minute lead when Dowling sprinted on to Deegan’s floated pass and lofted it over the advancing Scallon, but the ball bounced just wide of an inviting goal.

That was the sign for Freebooters to raise their game again. Within nine minutes, it paid off. Controlling an angled Scallon kickout, Banville dashed down the right touchline and slipped the ball on. Ben Maher took control, getting inside the challenging Ronan Buckley before pulling a low ball back for Cian Loy to crash home.

Ormonde Villa heads dropped after that goal – a little lull allowed Freebooters to control the game at their own pace – but it was the Blues’ turn to get rocked just as half-time loomed. After his side won a corner Deegan delivered a peach of a ball for the unmarked Robbie O’Driscoll to storm in at the back post and powerfully head home the equaliser.

Whatever was said in the Freebooters dressing-room at the break clearly worked as, within seven second half minutes, they all but had the Cup in their grasp.

That wasn’t the end of the action though. A flare-up between the sides saw both reduced to 10 men with 56 minutes on the clock, John McEvoy (Freebooters) and Finn Dowling (Villa) getting their marching orders for leading the fray.

Villa kept looking for a way back into the game and almost found a perfect reply to that Freebooters flurry. Again, Charlie Deegan was the provider with a teasing 60th minute corner, but Ronan Buckley’s volley flashed over the bar.

That chance stoked some fire into Villa, but the last remaining embers of hope were extinguished when Freebooters found a fifth goal with 20 minutes to play, Cian Loy completing his hat-trick when he clipped a low free-kick inside the far post.