May not out and minors gone! 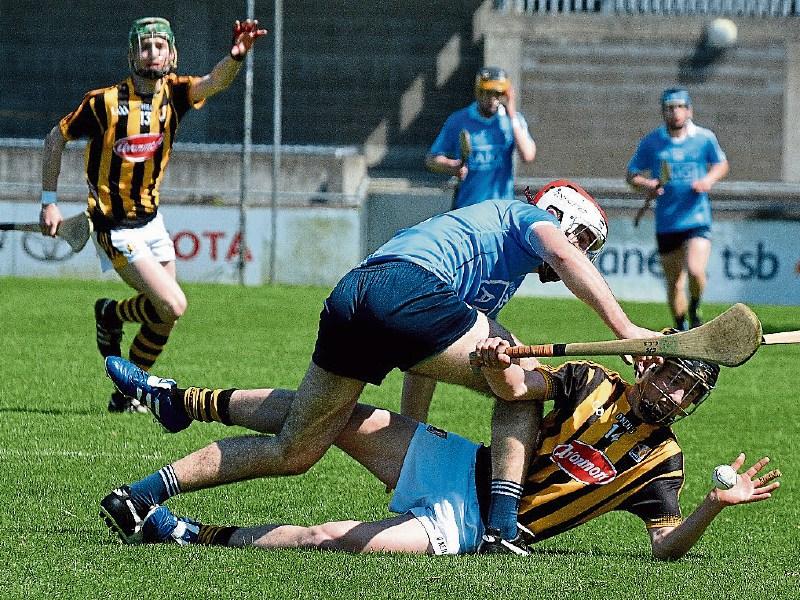 It was the nightmare scenario. May had run barely half its course and Kilkenny were out of the minor hurling championship.

Things like this happen to other counties, don’t they? Not the Cats, however!

Well, not until Saturday anyway, when the lion-hearted young Dubs bundled champions, Kilkenny, off their throne as they passed their big hurling exam before the State exams follow to book a place in the Leinster final.

Four minutes from the end of normal time in Parnell Park, the visitors got three points ahead when their best ball winner by a mile, John Donnelly, won yet another Kilkenny puck-out before shooting them into a 0-15 to 0-12 lead.

When Dublin’s Colin Currie, the man who changed things utterly when he took over the free taking duties after first choice specialist John McGuirk left the field injured in the opening quarter, drove a wide and fine visiting ’keeper, Liam Dunphy, saved a point blank effort from David Hawkshaw, it looked like the Cats luck was in.

However, the ever rising Dublin effort earned a goal right on the hour when Dara Gray provided sub Donal Burke with a fast ball no more than 12 metres from the target. Dunphy hadn’t a chance. The net danced.

As the game drifted into lost time Kilkenny (John Donnelly) and Dublin (Currie and Gray) had chances to clinch it, but it didn’t happen.

And seven minutes into extra-time the Dubs hit the front for the first time when a Kilkenny defender lost the ball when trying to break out from the back, and Conor Ryan shot his side 1-14 to 0-16 in front. From there on the temperature of the Dublin hurling soared. It was their game to lose from there.

They sneaked it via exchanges of 1-4 to 1-3 during the closing 12 minutes.

“It is tough when you lose. It doesn’t matter what way it happens, when you lose it's over and it not a nice feeling,” admitted Kilkenny manager, Pat Hoban.

“Dublin were good, and we have to congratulate them and wish them well, but we had our chances to get through. We just weren’t good enough on the day. We played well at times, but not good enough for long enough as it turned out.”

Kilkenny’s hurling was efficient during the first half when they had the backing of the cooling breeze on a bright, warm day. They opened brilliantly when former Feile-na-nGael skills champion, Edmund Delaney, clipped over a sideline cut from all of 35 metres.

Twice during the quarter the scores were level, but it was the Dubs who carried the greater threat in attack. Three times they might have goaled.

Darren Mullen executed a body block on Ciaran Dowling when he threatened, and goalie Dunphy saved from Mark O’Keeffe before Currie crashed a vicious shot against an upright.

With then free taker, Johnny McGuirk, missing frees, Kilkenny escaped into a half-time lead of 0-8 to 0-4. Free taker Edmund Delaney put his name on five of those Kilkenny scores.

The deadly Donnelly, who could pluck ball from the sky like you pick apples from a tree, claimed three.

By this time Colin Currie was on the frees for the Dubs, and he was red hot. Currie proceeded to land four frees during the next half hour and with the late, late goal from sub Donal Burke that was good enough to earn them parity on 60 minutes.

The Kilkenny attack was being carried by the efforts of Adrian Mullen, who had a superb second half, and Donnelly, who got to the hour with 10 points between them, equally shared.

There was an exchange of points early in the first period of extra time. Kilkenny had a goal chance in the 64th minute when Tom Whitty got a run at the target, but a rushed off load to a supporting colleague meant the chance came to nothing.

Midfielder, Conor Ryan, then won the winners the lead in the 67th minute (1-14 to 0-16) when he pointed. The roof was nearly lifted off the stand when that happened, and from there on the Dubs played like a team inspired.

Kilkenny tried, but they didn’t match the fire of the opposition.

Immediately following that Dublin point Ronan Hayes put Colin Currie clean through, and he bagged a goal to up the divide to a strong 2-14 to 0-16.

Determined defender, Victor Costello, tore up the field to shoot an inspiring point for the losers. Currie replied via another free to leave the score 2-15 to 0-17 after the first period of extra time.

Currie posted the first point after the change of end. Adrian Mullen landed a reply after a determined burst by the lively Shane Mahony ended with him being fouled.

Another lost ball by a defender ended with Ciaran Dowling claiming a point at the other end before sub Mahony crashed home a goal for the Cats after Chris Kavanagh delivered the ball into the danger zone (2-17 to 1-18).

There were five minutes left. When a defender over carried the ball, Kilkenny were awarded a free. Adrian Mullen pointed to leave the minimum in it, 2-17 to 1-19. There were three minutes left.

It was a no holds barred, survival effort from both sides. When Dublin were awarded a free on the ’55’ Colin Curren did what he had done all afternoon - he turned it into a score.

That was enough for the Dubs who had massive performers in Currie, Cian O’Sullivan, Conor Ryan, Jack McVeigh, Jack O’Neill and Dara Gray.

Did Kilkenny leave the game behind them? Not really.

Liam Dunphy, Tommy Walsh, Victor Costello, plus Donnelly and Adrian Mullen were star men and all put in a great effort, as did sub Shane Mahony, but that was never going to be enough against a super determined outfit.