... and the big two will meet again this weekend! 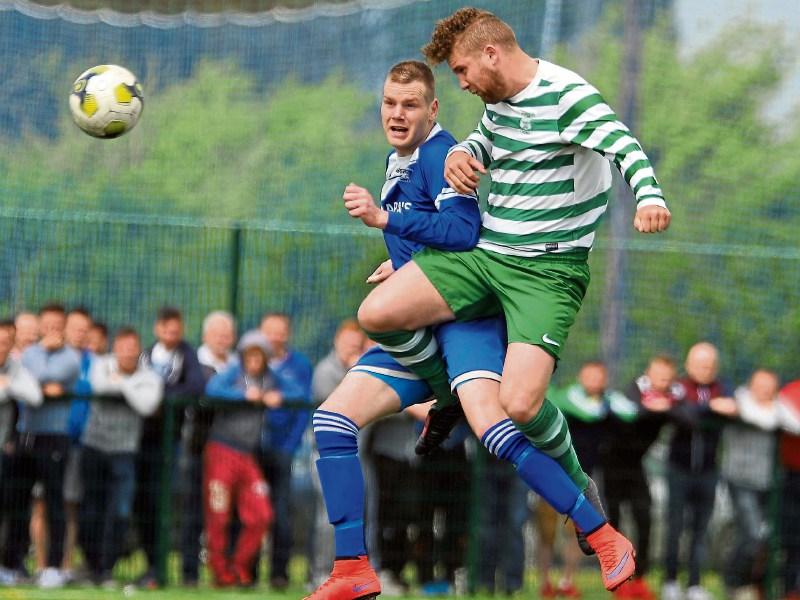 The phrase ‘familiar foes’ is bandied about quite a bit, but neither Thomastown United nor Evergreen A could deny it applies to them.

The teams, long-standing rivals in the Premier Division, will lock horns again this weekend when they both go hunting for McCalmont Cup honours.

Saturday’s final, the blue riband event of the local junior soccer calendar, will be the second meeting in a week of these two teams following on from last Sunday’s Leinster Junior Cup clash. They also met in the Maher Shield final last season, when Jason Quan’s injury-time winner netted the spoils for Evergreen.

So can Thomastown make sure the silverware has blue ribbons this time? Their management team of Stevie Walsh and Richard Watson certainly hope so!

United booked their place in the final thanks to a dramatic win over Evergreen B in the semi-final. Their toughest game in the competition this season, it looked like their campaign was at an end when they trailed 0-1 going into injury-time, but a last-gasp Dessie Walsh header, followed by two goals in extra-time, turned the tie their way.

They kept pressing for a goal - that never-say-die spirit was what the managers believe won the day.

“We always believed we had a chance,” said Watson. “The game’s not over ’til the referee blows that final whistle - we wouldn’t have it any other way.

“That’s the hallmark of the team,” added Walsh. “We played the Lions and even though we were 2-0 down with five minutes to go we just never stopped. We kept pressing and pressing. The lads will keep going and going - it gives you a great boost when you see lads willing to work hard like that.”

Making the final was a huge plus for a Thomastown team who have endured a lengthy spell without McCalmont Cup success.

“Winning the semi-final was a monkey off our back,” said Walsh. “Thomastown haven’t won the McCalmont Cup since the 1970s.”

Being in the shake-up for the final is a nice way to end their season, a campaign which didn’t get off to the best of starts thanks to injuries.

“We started the season without our two centre-halves, Derek (Brennan) and C.J. (Browne),” said Walsh. “Panel-wise we’re thinner on the ground than we were last year. We played about a half-dozen games without the lads and even when they came back it took them a while to get their fitness up.

“It’s only in the last two months or so that our form has picked up again and is very good at the moment,” he added. “Our performance against Evergreen B wasn’t the greatest but at the end of the day semi-finals are for winning. We know that the lads will never give up and that’s the key.”

That same intensity is just as equal in their rivals for the title on Saturday evening.

“This is going to be another massive game,” said Evergreen A player/manager Packie Holden.

“This is a competition we’re desperate to win, but the six-day turnaround from the Leinster Junior Cup semi-final means both teams will have a short time to recover.

“We’ll perform as best we can, and hopefully focus on getting another good result on Saturday night.”

You might think that holding the Maher Shield, as well as being on the brink of taking the Premier Division title, means Evergreen have enough local silverware this season - but they want more.

“It’s a competition that we haven’t won as many times as we would have liked, especially when you consider the teams we have had here at the club in the recent past” he said.

We have a massively experienced squad featuring people with international experience at different ages. That has come to tell in really big games. We’ll be counting on that to get us through. Thomastown are a really good side - Stevie and Richie have done a great job building a strong squad. We’re expecting a real battle.

“However, we’re defending champions and we’re very proud of that,” Holden added. “We’re eager to retain our title.”

Lee Kill will take charge of Saturday’s McCalmont Cup final. Assistants are Tom Walsh and Vinny Kiely, with Jimmy Nolan as fourth official. The officials’ kits have been sponsored by TC Tyres and Animus Sports.