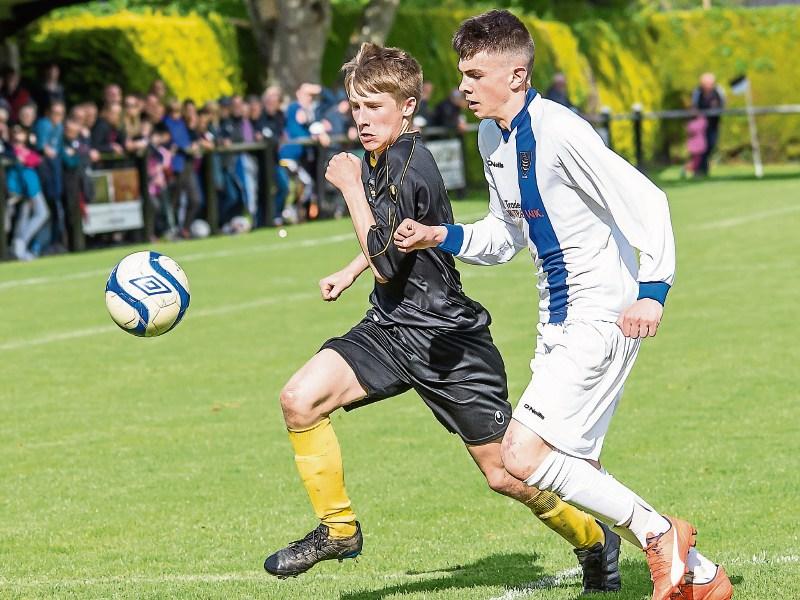 They have had their challenges all season, but the Kilkenny & District League’s under-16s scaled their last peak to stand at the summit as national champions.

The Cats hung tough when they needed to, showed patience when it mattered and delivered an ice-cool finish as they stunned neighbours Waterford on penalties in Cahir Park.

And chief tormenter of the Munster men was Michael Walsh. The Kilkenny goalkeeper was in the thick of things, saving two of Waterford’s four spot kicks to give manager Ronnie Grace the ideal birthday present – an inter-league title!

“It really hasn’t sunk in,” a smiling Grace said as he watched his side celebrate with the silverware. “We didn’t get our foot on the ball in the first half but we addressed it at the break – we took more command of the game after that.”

While the Cats were full of cheer at the final whistle, defeat was tough on Waterford. Penalties are a lottery, but it was a hard way to lose a game in which they had held the upper hand for long spells.

The beaten side may look on it as a smash and grab moment, but Kilkenny’s hard work delivered a little rub of the green when they drew level with 12 minutes left on the clock.

Sub Jack Morrissey was the man of the moment for Kilkenny, driving in a free-kick from out on the left, close to half-way. The ball flashed into the dangerous spot in front of goal, right into a packed goalmouth.

George Murphy tried to get something on the ball to flick it on but it didn’t need it – keeper Luke O’Brien, who was pegged back on his line, couldn’t stop the ball from zipping through and hitting the net.

Rocked to the Core

It was a goal that rocked Waterford to their core. Led by composed centre-half Lee O’Connor and the tigerish full-back Darragh Power the Deise side played a high line and kept Kilkenny camped in their own half.

Slowly, they turned possession into chances. Cian Kinsella and Manus McFadden had early opportunities to give their side the lead, as did Dylan Swales, so it was no surprise when they drew first blood after just 17 minutes.

McFadden, who was a constant threat with his pace and precision on the wings, was the provider. Racing on to a diagonal ball out of defence McFadden dashed down the left and fizzed a low ball across the box. Swales reacted quickest, rushing to the near post to apply a cool finish.

With Kilkenny playing it tight across the back and midfield – at times Ciaran Brennan found himself facing four defenders on his own – Waterford were allowed to play the game at their own pace.

Still, they couldn’t find the second goal their possession levels deserved. Knox could and should have extended their lead when he stole off the back post to meet Lee O’Connor’s raking 28th minute free but he directed his header straight at Kilkenny ’keeper Michael Walsh.

Jason Goldsmith also had a chance to double Waterford’s tally when he played a one-two with Swales and raced into the box, but Walsh dashed from his line to smother the shot – a vital save.

Kilkenny weren’t afraid to change things up, making three switches around the interval as they tried to cope with Waterford’s prowess on the wings. All three subs teamed up to provide their side with a decent chance to level the game on 52 minutes, Mark Power heading Jack Morrissey’s cross back towards Emmet Moran, but the ball skidded away beyond his reach.

Waterford stepped things up after that but still couldn’t find a way through. They won a corner following a great spell of possession (Darragh Power, Conor Whittle and Oisin Knox all impressed as they worked the ball around the pitch) but when Cian Kinsella flicked the ball in it flashed past the post – Dylan Swales was a whisker away from connecting.

Waterford were stunned when Jack Morrissey grabbed the equaliser for Kilkenny, but they quickly cleared their heads and almost fired straight back.

From the resulting kick-off Manus McFadden bombed down the left and whipped the ball into the box. Oisin Knox managed to shimmy past Michael Walsh but Sean Manogue flew in with a superb challenge, deflecting the ball up and over the bar.

Waterford tried their luck again from the resulting corner and went close again. Dylan Swales did well to get up and meet Regis Madiga’s teasing corner, but Ciaran Brennan hacked the ball off the line at the back post.

Waterford continued to press but found little joy. Their efforts almost backfired, as gaps in their defence allowed Kilkenny to make some late counter-attacks. Cillian Power showed strength to hold off a tough challenge and pace to sprint forward before laying the ball off to Ciaran Brennan, but he lashed his 80th minute shot over.

Still Kilkenny kept going, almost nabbing a winner in stoppage time. Dispossessing Darragh Power in midfield Justin Cahill drove on, making room on the edge of the box to slip the ball through to Emmet Moran. He managed to wriggle his way into shooting space, but Adam Conway got back to make a telling block.

Extra-time was a tamer affair, but the dram came back for penalties – enter Walsh and his heroics.

Waterford went first, but were instantly on the back foot as Kilkenny’s Number One dived to his right to beat out Lee O’Connor’s effort. Eoghan Moylan capitalised on that, firing his kick high into the right of the net. McFadden and Moran converted their kicks, but when Walsh made another super save to deny Lee Costello, followed by Ciaran Brennan’s successful penalty, Kilkenny dared to dream.

The nervous air fizzled as Brian Cooke scored a vital kick for Waterford, then tension ramped up as Jack Morrissey stepped forward. There was real pressure on his shoulders, but he made it look effortless. His cool low kick to the left crashed into the net – the Cats were champions!