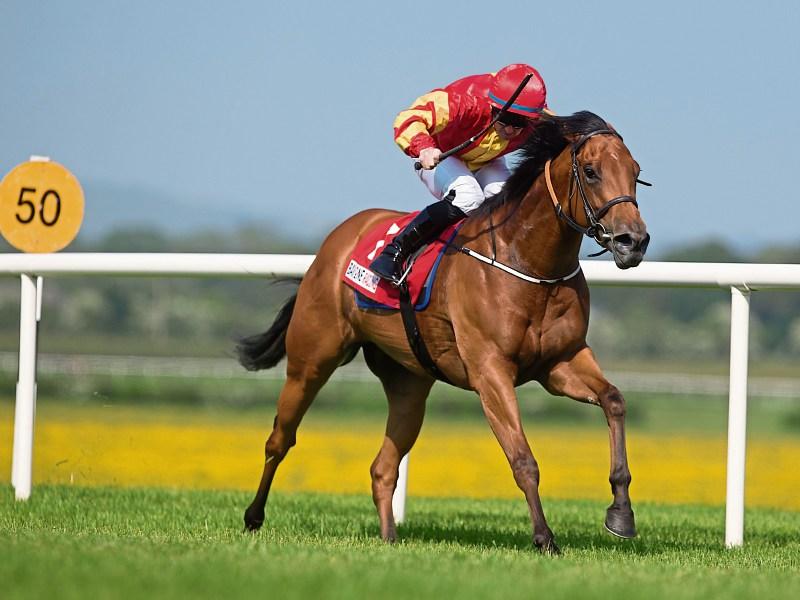 Declan McDonogh, who was champion Flat jockey in 2006, continues to be at the top of his game.

He demonstrated that with a treble at Gowran Park last week.

He teamed up with Charles O’Brien to take the seven furlong handicap with 10/1 chance Great Wide Open and ended the session on a high when winning doth divisions of the nine furlong handicap.

Charles O’Brien-trained Zorba The Greek (7/1) was the winner of the opening leg and Paul Nolan struck when 12/1 shot Usain landed the second division.

Aidan O’Brien provided two winners. His 8/11 favourite Monarch veered badly to the left inside the final furlong of the seven furlong maiden but still prevailed by two and a quarter lengths under Donnacha O’Brien.

Seamus Heffernan did the steering as 11/4 shot Earring saw off 9/4 favourite An Cailin Orga to win the 9f maiden. Colin Keane was seen to great effect once again when getting Ger Lyons’ Reckless Endeavour home by a head from Mizaah in the seven furlong rated race.

The Fethard, County Tipperary trainer has enjoyed previous success with her talented sprinter Maarek at York and Beverley in recent seasons.

Dermot Weld and Pat Smullen won the nine furlong fillies’ race with 4/5 favourite Shamreen who looked in a spot of bother early in the straight but picked up to win as she liked from her main market rival Siamsaiocht.

Aidan O’Brien, his wife Anne Marie, son Joseph and daughter Ana were all among the winners in the early races at Tipperary last week.

Aidan teamed up with Seamus Heffernan to win the opening five furlong maiden with 9/4 favourite Pedestal, but it was very much a family affair when Arya Tara landed the 12 furlong median auction maiden.

Winning rider Ana O’Brien was wearing her mother’s colours and the 6/4 second favourite is under the care of Joseph O’Brien at the family’s training facility in Piltown.

Tony Martin and Jack Kennedy combined to win the opening division of the maiden hurdle with the well supported 4/7 favourite Heartbreak City. There was also notable support for Weather Watch, who landed the second leg of the same race for Jessica Harrington and Mark Bolger.

Mark Cahill, who trains at Carrick-On-Suir, landed the handicap hurdle with 6/1 shot Pilgrim Way, who went well under Sean Flanagan.

Shane Shortall partnered Fighting Days to win the 2m handicap hurdle (10/1) and Ger Fox was in the plate as 7/1 chance Kylestyle came from off the pace to win the 2m 4f handicap chase.

Jessica Harrington and Mark Bolger won the beginners’ chase with 1/1 favourite Duckweed, who could hardly have been more impressive on her chasing debut.

Another winning market leader was the Karl Thornton-trained Wakea, who easily won the maiden hurdle at odds of 4/6.

Bosco Di Alco was sent of the 3/1 favourite for the bumper and Liz Doyle’s five-year-old didn’t disappoint under Finny Maguire, who was riding his second winner in two days.

Leslie Young and Ryan Treacy teamed up to win the 2m4 furlong handicap hurdle with 11/1 shot Fleurys Fort while there was a controversial finish to the three mile handicap hurdle as first past the post, Misdflight was disqualified giving victory to 7/2 chance Clontarf, trained by Dermot McLoughlin and ridden by Keith Donoghue.

Ger Lyons and Colin Keane continue to go from strength to strength and they shared two winners at Navan on Saturday.

Medicine Jack ran away with the opening median auction maiden, the easy-to-back 7/4 joint-favourite winning by four and a quarter lengths from his main market rival Magnification.

In contrast, 4/5 favourite Lustrous Light only scored by a neck in the 10f maiden but his victory was never really in question and he will certainly benefit from a step up in distance.

Jim Bolger was another to record two winners. He took the opening division of the 13 furlong handicap with the Rory Cleary-ridden Pirolo and went on to land the 10f handicap with the Ceol Na Nog who made most of the running under Kevin Manning.

Gordon Elliott and Declan McDonogh took the second division of the 13 furlong handicap with Ibsen. Another to win at odds of 11/4 was Eddystone Rock, who landed the 10 furlong handicap for Johnny Murtagh and Connor King.