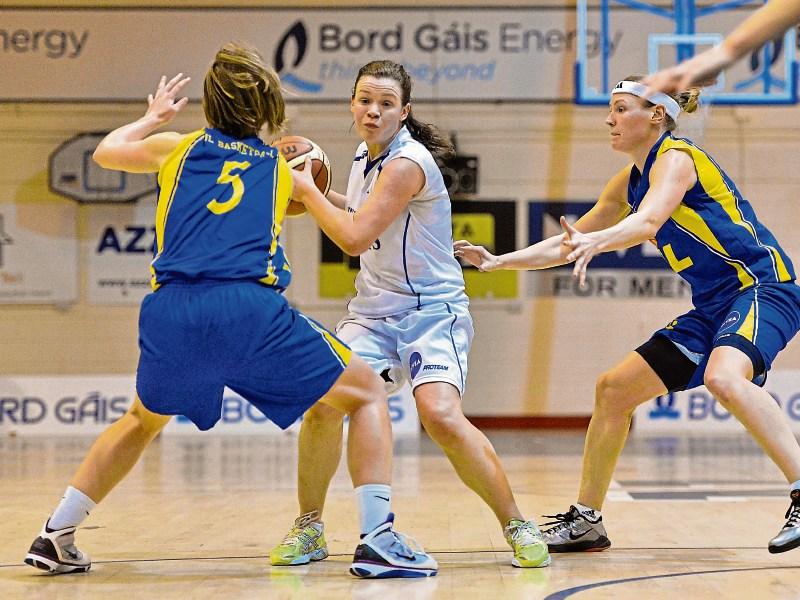 While people’s minds turn to holidays at this time of year, one Kilkennywoman will be using her Summer to lead Ireland to European glory.

For Kilmacow’s Sinead Deegan this month isn’t about relaxing on a beach. Instead, she’ll be taking to the basketball court in search of international honours.

Deegan is part of the Irish senior women’s basketball team who will travel to Gibraltar at the end of the month to compete in the European Championships for Small Countries.

The Maxol WIT Wildcats pointguard is one of 12 players who will don the national shirt and take on Moldova and Wales at the competition.

Making the grade - she is the only Kilkenny player in the squad - took a lot of hard work, but Deegan is ready to shine on the international stage.

“I was a bit shocked when I heard the news,” she admitted. “However, I’m delighted to be there - I’m thrilled.”

A teacher in the Mercy primary school in Waterford City, Deegan has worked hard to earn her place.

“The call went out to the senior women’s clubs in Ireland to send players forward for the national team,” she said. “It’s the first time we’ve had a senior international team in six years - it’s something I wanted to be involved in so I decided to put my name in for the trials, which were held last Christmas.

“It was a great opportunity to play for your country,” she said of the trial games. “As they went on the numbers were whittled down to 14 before finally being narrowed to 12. It was very tough in the closing weeks - it was anyone’s guess as to who would make the team.”

However, just when the finish line was in sight, injury threatened to derail her international ambitions.

“I pulled ligaments in my ankle, just as it was coming to crunch time,” she recalled. “I tried to get myself back to full fitness and managed to make the last training session; thankfully I made the cut for the last 12.”

No-one ever wants to get an injury, but to get it just weeks away from making a national side was incredibly unlucky.

“Things had been going well, so I was gutted when I picked up the injury,” she said. “I was just training by myself,” she continued. “If it had been in a match or national training it would have been something else.

“I was gutted, but tried to stay as upbeat as I could and get myself back to full fitness as soon as possible. Thankfully, help from the physios paid off, but I stayed positive and did as much training as I could off my feet.”

Despite the injury, Deegan never gave up hope.

“When there was something to play for, in this case a shot at representing Ireland, you had to stay positive,” she said.

“I really wanted to get back to training and playing. While recovering I went up to watch some of the training sessions. There’s nothing worse than being on the sideline looking at the team train - you feel like you’re watching your chances go down the drain. I had it in my head that I wanted to be back for the last weekend of training, which was held in Galway.

The hard work paid off - but it took time for Deegan to take the good news in!

“The team was announced online,” she said. “My brother spotted it and sent me a text - that’s how I found out!

“I couldn’t quite believe it,” she added. “It took a good few days for the news to sink in. It wasn’t until the manager (Grace O’Sullivan) emailed us (the players) that I fully believed I’d made the team. That’s when it all became real.”

And with the news came a steady stream of messages, texts and well-wishes…

“I got so many messages from family and friends once the news was out,” she said.

Of course, none were prouder than Sinead’s parents, Tom and Bernadette.

“My Dad put the announcement into the parish bulletin,” she said. “My family were delighted.”

Making the Irish senior team has been a dream come true for a girl who was bitten by the basketball bug many years ago.

“I’ve always loved the game,” she said. “We had a club in Kilmacow, Blackwater Basketball Club, so from an early age I played in the Kilkenny League with all my school friends. It was like a youth club, we got together to play every Friday night. I absolutely loved it.

“As I got older I went to the Mercy secondary school in Waterford and continued to play the game, going on to play senior basketball with the Waterford Wildcats.

“When you’re with your friends, playing a sport you love and being coached by good coaches you really enjoy it,” she said. “Every weekend, until I was in sixth year, I spent my weekends playing basketball.”

It might sound like she left no time for anything else, but sport provided Deegan with the skills to juggle a busy life.

“When you’re playing that much sport you find a way to manage your study and social life,” she said. “Mind you, if my friends weren’t playing basketball there was a chance I didn’t see them for a while!

“Time-management was crucial, but I think any person who plays sport will relate to it,” she added. “You only have a certain amount of time to get things done, but sport and study complemented each other. I don’t know how I would have been able to do my Leaving Cert if it hadn’t been for sport; it was a release from studying. It’s something I would encourage everyone to do, as sport can be massively beneficial for anyone who is going through their Leaving.”

Deegan has enjoyed a good season with the Wildcats, adding that it propelled her on to the national try-outs.

“We did quite well this season in comparison to other years,” she said. “We reached the Cup semi-finals and finished in the top four so we were very happy. When you have a good year your spirits are high.

“Making that progression with the club was the spur to try out for the Irish team,” she continued. “When you get that chance you have to take it. The worst thing that can happen is that you get cut from the trials, which can only give you fuel to improve for the future.”

And now that she’s made it there, Deegan hasn’t hidden her European ambitions. Ireland have won the silver medal on three previous occasions (1989, 91 and 93), so hopes are high for more glory this time around.

“We have a fantastic opportunity to do well at these championships,” said Deegan. “We’re hoping to go out and compete - we’d like to get to the final. We’re taking on Moldova and Wales, but there’s a good side filled with talented players who will be hoping to go all the way. That’s the goal.”

Ireland head out to Gibraltar on June 24, playing their first game against Moldova on June 28 before taking on Wales 24 hours later.

The tournament runs for a week, with the final on July 3. However, the players have one more task ahead - they have to finance the trip themselves. Making the team was one challenge - raising the funds to get there is another.

“It’s so difficult with so many other people and places trying to raise money at the one time,” said Sinead, who is currently organising fund-raisers locally - players also have tickets for a Basketball Ireland draw which will be held before the tournament.

“Basketball Ireland has gone down the self-funding routes, even the men’s and under-age teams do the same,” she said. “There are so many demands for people’s money, but we’ll have to do our best.”

To help Sinead out with her fund-raising, or to buy Basketball Ireland draw tickets, email sindeegan@gmail.com.