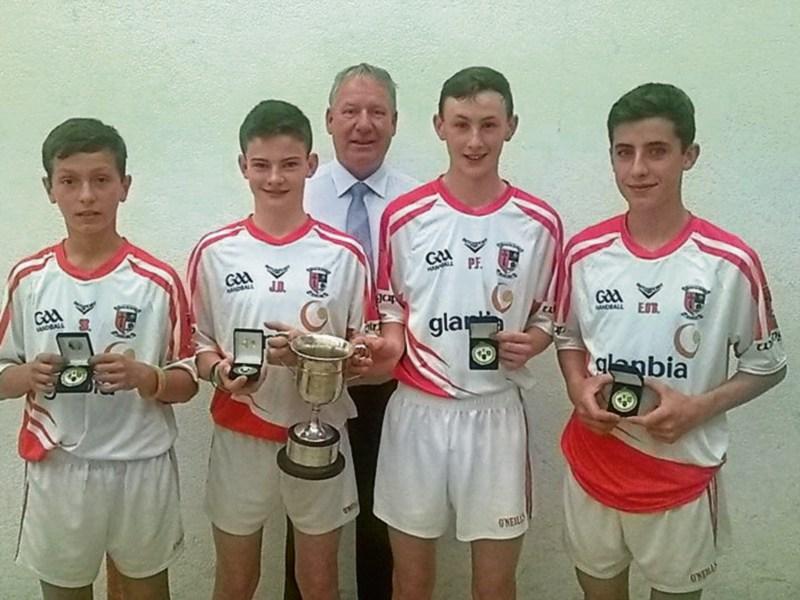 Kilkenny struck gold at the national Feile-na-nGael handball finals at the weekend.

There was great delight for a number of clubs when Windgap, Clogh and Kells all brought home titles.

Pride of place went to the brave-hearts from Windgap who captured the boys Division 1 40x20 crown.

They really hit the high spots when defeating Monaghan Harp 35-14 in a top class final.

Clogh were the runners-up in the boys 60x30 section and winners in the girls Division 3 grade.

Their girls were runners -up in the Division 3 competition.

Success was also recorded in the individual skills competitions.

Kyle Dunne (Clogh) was a gold medal winner in the 60x30 event.

Billy Drennan (Galmoy) and Jack Doyle (Windgap) were second and third in the Division 1 40x20 grade.

The successful Kilkenny teams were:

At the USHA championships in Minnesotta, US, Talbot's Inch star, Michael 'Ducksie' Walsh won the over 45 grade when easily winning all three matches he played.

He also played in the Open doubles with Gavin Buggy (Wexford).

They were beaten at the semi-final stage, 21-7, 21-3 by top seeds Marcos Chavez and Sean Lenning, who were really on song..

The Leinster 60 x 30 championships are up and running and a full set of fixtures are scheduled for the next week.

Also scheduled for this week are the provincial finals of the team of four events, with St Patrick's due to contest the Junior B decider on Saturday evening.

The annual One Wall championships are taking place in Breaffy House, Castlebar Mayo at the weekend.

The county One Wall championships will be played in Windgap in July. Entries will be taken on the day.