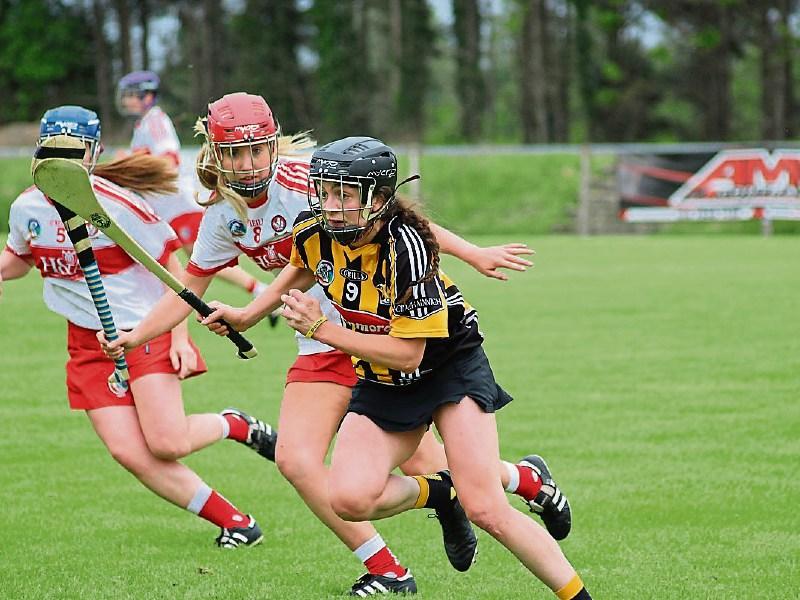 The Kilkenny senior camogie team claimed there first win in the All-Ireland championship series when they easily overcame Derry in Swatragh on Saturday.

The victors started brighter and raced into a 0-7 to no score lead.

Ann Dalton started the rush of scores with a brace of points, the first in the opening minute from 45 metres.

Julieann Malone then tapped over a point in the third minute. Meg Farrell added to the gains from 35 metres in the seventh minute to make it 0-4 to no score.

Miriam Walsh continue the good run with a point from 20 metres in the eighth minute.

Shelly Farrell tapped over before Ann Dalton chipped in with her third point in the 13th minute to make it 0-7 points to no score.

Aoife Shaw stopped the rot for the Northerners when she scored a goal from a 20 metre free a minute later.

The Derry comeback was short lived, however. The Cats hit Derry for 1-7 during their next surge of scores.

Sarah Ann Quinlan started the run with a goal in the 17th minute after latching on to a Miriam Walsh pass before tapping home from the edge of the small square.

AnnDalton slipped over a brace of points, the first from 35 meters, and then from a massive free from 60 metres in the 20th minute.

Miriam Walsh pointed to leave the score 1-10 to a 1-0 as the game was all but decided already.

Meg Farrell added a point from before Julieann Malone tapped over a point from 20 metres. Anna Farrell closed out the first half scoring with a well taken point to leave Kilkenny leading at the break 1-13 to 1-0.

The Noresiders continued the onslaught when the action resumed and shot 1-1 on the spin.

Ann Dalton opened the scoring with a massive point from a free from the halfway line. Denise Gaule added to the gains when she shot the Cats second goal after she raced on to a breaking ball before cuting through the Derry rearguard and blasted home from the edge of the small square.

Aoife Shaw hit back for Derry with a pointed free in the 33rd minute.

Any hope of a Derry revival was short lived. Miriam Walsh got in for Kilkenny's third goal in the 36th minute when she reaced on to a breaking ball before cutting through to hand pass home from the edge of the small square.

Julieann Malone then tapped over a excellent long range point( 3-15 to 1-1).

Derry were awarded a penalty in the 39th minute after Mary Kelly was fouled. However, Aoife Shaw's effort hit the cross bar and Kilkenny cleared their lines.

Julieann Malone grabbed a point from 20 metres in the forty third minute after brilliant link up play with Shelly Farrell.

Credit to Derry they never gave up. Their efforts were rewarded when Katie McAnenly nabbed their second goal from a 20 metre free in the 45th minute.

Kilkenny barely noticed. They bounced back brilliantly and lahsed home 1-5 without reply.

Miriam Walsh started the blistering run with a brilliantly taken goal. She gained possession on the '20', rounded her marker and blasted home.

Katie Power, who had just been introduced as a sub after a long lay- off through injury, showed she is as sharp as ever when she tapped over a point from 45 metres in the 53rd minute.

Michelle Quilty, who also was just introduced as a sub, slipped over a well taken point.

From the resulting puck -out Katie Power gained possession before returning the sliotar between the posts.

Michelle Quilty grabbed her second point to make it 4-22 to 2-1.

Katie McAnenly stopped the charge for Derry when she converted a free from 40 metres before Anna Farrell replied for Kilkenny with a point.

Grainne McNicholl responded with a point for Derry.

Katie Power rounded off a brilliant comeback when she bagged 1-1 in the final moments of the contest. She started the run with a point from 20 metres .

She then got in for Kilkenny's fifth goal a minute later when she gained possession on the edge of the small square and hand passed home.

Next up for Kilkenny, the National League ch ampions, is a clash with Dublin at home on Saturday. That is sure to be a sizzling contest.