Heartache at the death! 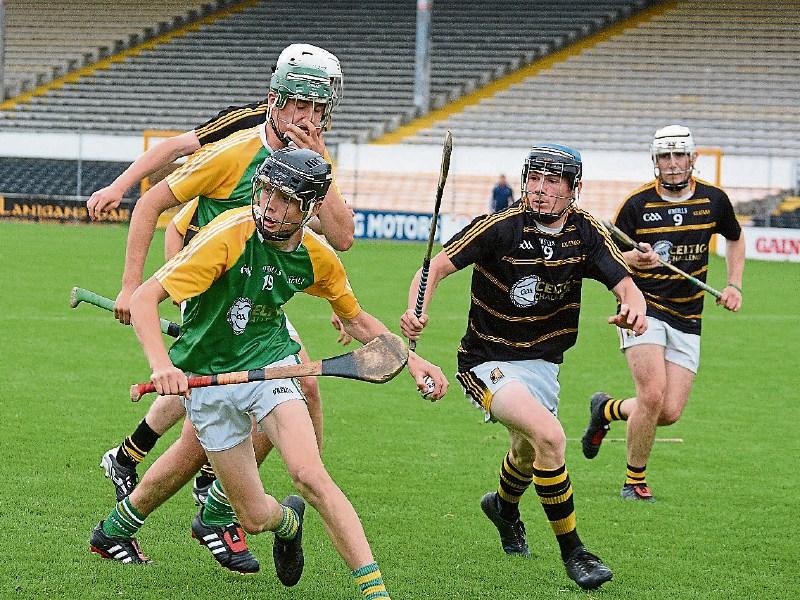 No more than an inch separated brave South Kilkenny from a late, late draw after a storming second half in the Division I Celtic Challenge hurling final in Nowlan Park.

With 61 minutes and 51 seconds showing on the stopwatch Even Shefflin took on a challengenging free from midfield in a bid to earn the wind assisted Cats a draw with Offaly, who looked all over winners when leaders by 3-8 to 0-8 at the break.

While the brave Ballyhale Shamrocks lad struck the ball well, it sailed to the right of the upright at the county end and Offaly danced with delight when the final whistle sounded immediately.

Offaly took charge of the handsome Michael Hogan Cup - he was one of the people who died in Croke Park on Bloody Sunday - which was presented by Eamon Hogan, a newphew of the man after whom the cup was named.

"No blame on anyone, we were unlucky to come up short," insisted South Kilkenny team manager, Pat Power.

"We won together. We lose together, but we had a lot of fun together.

"The players will be all the better for the experience of playing in this competition, which has a huge future," he added.

There was nothing between the teams during the opening quarter as 10 points were equally divided, with both having moments in front.

On 16 minutes the industrious Oisín Hickey clipped home a goal for Offaly from close range, and they led all the way home from there.

Shortly afterwards they added a second goal, this time after deadly free taker Darragh Tierney landed a ball in the square, which was prodded home by Michael Milne.

The good times continued to roll for Offaly, and during the following minutes John Murphy and Darragh Tierney pointed before the former shot a rather easy goal in the 25th minute (3-7 to 0-5).

South Kilkenny pulled back late points through Richard Hennessy, Daithí Barron (free), following a foul on Ethan Phelan, and Evan Shefflin (free), against one reply from Cathal O'Meara, to leave Offaly strong leaders by 3-8 to 0-8 at the break.

The losers stormed out of the blocks in the new half, and an early point from Niall Hayden set the mood for what was an all outing attacking approach.

With Patrick Hearne, Evan Shefflin, Richard Hennessy, Niall Hayden, Conor Murphy, Jack Cullen, Michael Carey and Daithí Cullen driving the team with great force and hurling skill, they had Offaly on the back foot for long periods of the half.

A 34th minute goal from Barron, who burst through the defence before striking home with one hand on the hurley, gave the home side a massive boost. Sub Bill Delahutny added a point to cut the deficit to 3-9 to 1-10.

The winners hit back for a minor before Bill Delahunty finished to the net from the edge of the square after a powerful shot from Conor Murphy had been blocked out (3-10 to 2-10).

A foul on Delahunty saw free taker Daithí Barron added a point to the Kilkenny total, and suddenly it was game on big time.

All credit to Offaly, they bounced back. When the talented Oisín Murphy lofted in a ball from the left wing, John Murphy charged in and knocked the dropping ball into the net from the edge of the square (4-10 to 2-11).

That was in the 56th minute. South Kilkenny didn't give in. Ethan Phelan placed Bill Delahunty for a point before Barron was unlucky with an effort for a minor.

On the hour mark the losers were awarded a free 22 metres in front of goal. Niall Hayden stepped up to the free, and drilled it head high into the net. The dividide was down to the minimum.

The Cats were unlucky not to force the issue to extra-time when that late free mentioned early barely missed the target.