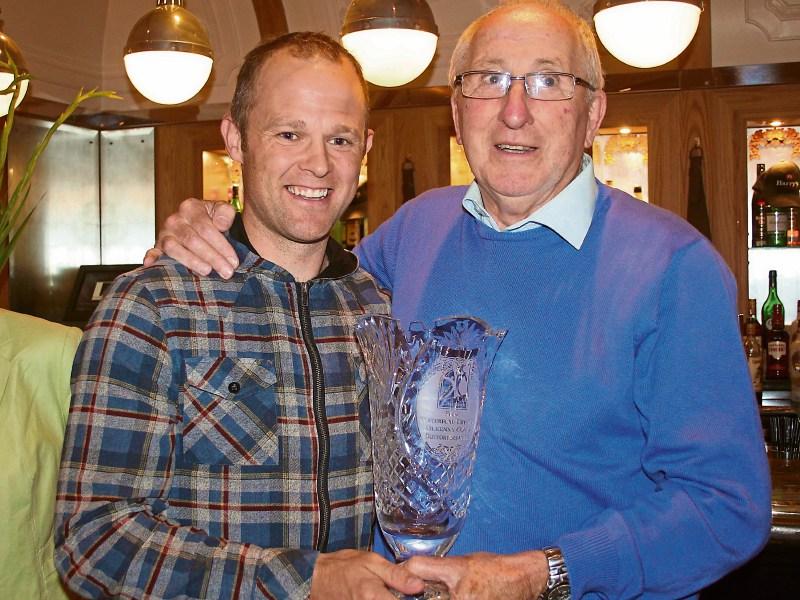 A proud and loyal son of Kilkenny was honoured on his birthday and thanked for his great service to the county.

Dr Sean Dunne, founder of the Kildare branch of the Kilkenny GAA Supporters Club way back in 1994 and an officer of the group since, was honoured on his 80th birthday for his on-going service and commitment to the cause of Kilkenny Gaelic games.

"He may have been living away, but his heart has forever been with Kilkenny," said County Board chairman, Ned Quinn, when leading the tributes to a man who has been an indefatigable fund-raiser and promoter of every cause of the Supporters Club during nearly 25 years of active service.

Mr Quinn said Dr Dunne and his loyal group in Kildare were major contributors to the promotion of Gaelic games at all levels in the county through their fund-raising efforts, and it was only fitting that their efforts should be recognised.

This year, for example, the Kildare branch sold 83 tickets in the Hurlers Co-Op draw, which was typical of their annual efforts to help raise finance to promote Gaelic games in the county.

Dr Dunne was joined in the celebrations in Harry's Bar, Langton's hotel by his wife, family and grandchildren as well as Kilkenny stars past and present, members of the Kilkenny and Kildare branches and officers of the County Board.

Dr Dunne figured on a Kilkenny minor hurling team with the great Ollie Walsh in the fifties that was beaten by Dublin, who went on to win the All-Ireland. He continues to serve as the medical officer with Kilkenny teams whenever the need arises.

On top of his duties with the Kildare branch, Dr Dunne is assistant secretary of the Kilkenny GAA Supporters Club.

Meanwhile, at the annual meeting of the Supporters Club members were told great progress was made during 2015 to boost Business Membership. In all, 183 Business Members have been signed up, to go with 1,390 individual members.

"This was the most successful year since we launched this project," said secretary, Jim Freeman during his annual report when commenting on Business Membership. "This is an area that has great potential, and I look forward to improving these numbers in the years ahead."

The texting of teams as soon as they are announced to individual and Business members is a huge attraction, he added.

Sales in the Supporters Club shop produced a record income, even if Kilkenny fans have been regular buyers over the years of jerseys, flags and so on. He thanked chairman, John Mackey, for coming up with the idea of producing mugs which displayed photographs and the achievements of various players on them.

"We benefited great from this, plus the sales of jerseys, tops, jumpers and so on," Mr Freeman added.

He thanked Lahart's Garage, Waterford Road, for providing the GAA with a van, and motors dealers around the county for providing cars for players.

"The County Board is now independent and self sufficient when it comes to preparing the various teams, and that is the way it should be," Mr Freeman said. "We as a county are not under any financial pressure thanks to the good planning of the Management Committee under the leadership of County Board chairman, Ned Quinn.

"If the players on our senior hurling team remain free of injuries, I would be confident that we will go close again to winning the Liam MacCarthy."

It made grants of over €83,500 to teams representing Kilkenny, schools equipment, coaching subsidies for schools, teams sportswear and equipment (€19,471) and a donation to the players' holiday fund (€50,000).