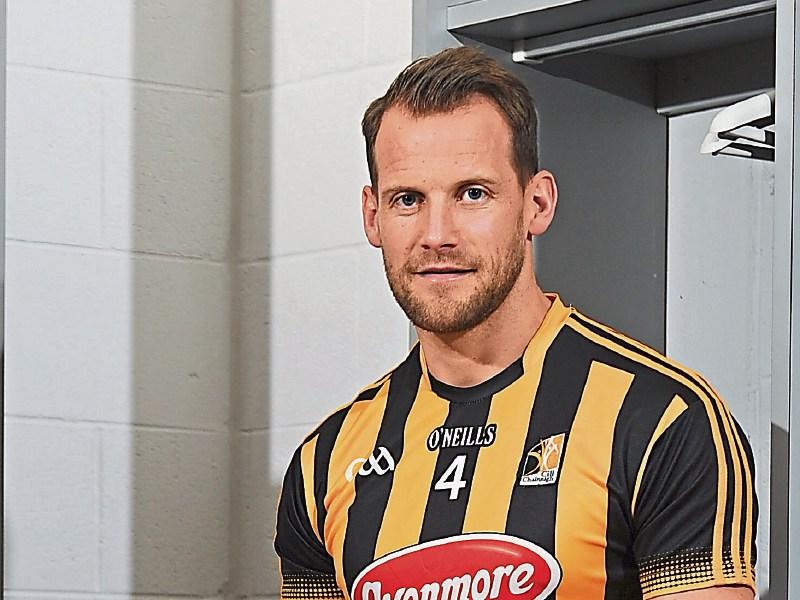 High achiever, Jackie Tyrrell, is looking forward to celebrating a good anniversary in the next few weeks.

The Leinster final on Sunday week against Galway will be almost a year to the day since the powerfully built James Stephens defender last started a championship match with Kilkenny.

And he is determined to be involved.

His last championship start was in July 2015, and since then a succession of injuries have curtailed his game time.

Subsequently he missed out on the All-Ireland semi-final against Waterford with a foot injury when his place on the team was taken by Shane Prendergast.

Although listed among the subs for the All-Ireland final against Galway, he didn't see any action.

The foot injury acted up again later, and his club championship with James Stephens was wiped out, but Tyrrell is sure those dark days are behind him.

He played about 20 minutes of the National League semi-final against Clare before a muscle strain halted his involvement.

Then he was grounded again by a hamstring strain when picked for the recent Leinster championship clash against Dublin. They were minor issues, he insisted.

The 34-year-old is happy and confident he can drive on to better times.

"Absolutely," Jackie assured when we spoke at a GAA/GPA and Glanbia promotion.

"No doubt about it. I wouldn't be still on the Kilkenny panel if I didn't think that. The injury is not that serious."

He has been waiting a long time, but that has only heightened the longing. He was listed for the All-Ireland final against Galway, and he felt ready.

"How long I would have lasted I don't know," he said of the situation then after having his foot in a surgical boot for a few weeks.

"I did a fitness test the Friday before it and I came through 35 minutes of intense running and tests, so we will never know that now.

"The lads were back training on January 14. I was there. I have trained hard since.

“The last while things have gone well, and apart from that little hiccup with the injury before the Dublin match I have been feeling good."

The hamstring problem is just something he has to be mindful and careful of, he added. He was back doing straight line running on the Saturday before the Dubs game.

"I have to build that up now, twisting and turning," he added. "Another week or so and I will be back going flat out."

Tyrrell, who has 48 championship appearance behind him and is currently one of the most decorated players in the game with nine senior All-Ireland medals in his collection, is sure he is ready to kick on again.

He is looking forward with confidence to the rest of the season.

He was delighted with Kilkenny's positive start in the championship against Dublin, although it didn't change an awful lot apart from the fact the win put the defending Leinster and All-Ireland champions through to the provincial final.

"It is good to get the first championship game under your belt," the Glanbia sales executive insisted.

"The last time we had togged out was against Clare and that ended up a disappointing affair. It was good to get a win to boost the confidence again.

"Obviously getting championship time and experience into the likes of Jonjo Farrell and Rob Lennon was good too. It strengths the squad further and increases the competition for place.

"A good solid win like that gives a bounce to your season. There was a kind of toughness about it too. We stood up to that toughness. Mentally we were very strong too. The way it all went gives us good impetus."

He said three weeks was a nice break before the Leinster final, when some useful work could be done on the training field.

"The mood is good in the camp," he assured.

The physical approach adopted by Dublin in the first half certainly put it up to Kilkenny, but the Cats are well walked and they dealt comfortably with that approach.

Tyrrell's reaction was that Kilkenny don't go out looking for that sort of game, but the players can look after themselves if it is put up to them.

"Absolutely," he said when the question was posed. "We kind of embrace that. It is like 'if you want to play it like that today, no problem at all'. It is great going out into a tough, physical game.

Don't go looking for it

"Dublin brought that. As I say, we don't go looking for it, but if it comes our way we are well able to look after ourselves."

The Cats are conditioned, physically and mentally, for such jousts and they take it all in their stride.

"We have built up our strength and conditioning over the years, and we have been in many a physical battle," Jackie reminded. "We have that in the back of our mind that we have seen this before. There is no panic. We can deal with this.

"It was a very mature performance from that point of view against Dublin," he insisted.

And the good showings turned in by Farrell and Lennon further heightened the battle for places within the squad.

"Yes, for sure," Jackie smiled when one joked that there was a line of three serious contenders now all fighting for the No. 4 shirt he craved.

"It just makes the job of the selectors that bit harder, which is what they want," he continued. "It says to everyone else, look lads, anyone can play here. It is up to the players to put their hand up for inclusion."

Did the lengthening line alter his thinking toward training or anything like that?

"I still have to get myself into the best shape possible no matter who is there," he replied. "It is still that. I have to go out and perform and make management say I am the best man for the position.

"The situation doesn't trigger anything in particular. I knew Rob Lennon was a good hurler before he did the business against Dublin. That doesn't change anything, and it is the same with Shane (Prendergast) and all the other backs.

"The competition for places raises the level of performance because the lads have to really, really put their hand up."

Obviously the low point of the season thus far was the collapse against Clare, and a nine point defeat in the League semi-final. That led to a questioning of Kilkenny's current value, and suggestions in some quarters that they were on the wane.

What was the reaction in the Kilkenny camp to that?

"That is the way sport is," Jackie said of suggests that the way the League finished would mark a shift in the order of things this season. "You get a laugh out of that. No matter what we win or how we perform, or don't perform, that sort of thing will always be there.”

But how do Kilkenny keep the level of performance so consistently high?

"There is a burning desire to be the best you can be," came the reply. "Obviously Brian (Cody) as manager is facilitating that. The lads want to squeeze everything possible out of their careers.

"We are lucky enough to have a group of players who are very talented, but who are also very grounded and hungry.

"Performance can be personal. You have sacrificed so much and trained so hard you want to be able to go out on the field and totally express yourself in a positive way. That feeds into the team thing then, that you are at your best. Players at this level shouldn't need telling when they are going well, or otherwise."

And so now for the Leinster final against Galway.

"They will be up for it," Jackie insisted. "They will have huge motivation and hunger to beat us. They have probably suffered over the last few years because of us, but they are a very, very dangerous team."

Despite the fact the counties have clashed frequently in Leinster and All-Ireland finals in recent times, and Kilkenny have fared so well, players never think the numbers games and it might be Galway's turn the next time.

"No. No," he assured. "If you go in thinking like that it probably will happen. You can't think like that. You must be ready to play, and we will be."

Jackie was speaking at the promotion of a new Vanilla flavoured Avonmore Protein Milk. It contains 27g of protein per serving, with no added sugar, and it helps build and grow muscle mass as well providing a good source of calcium, vitamin B12 and added vitamin D.