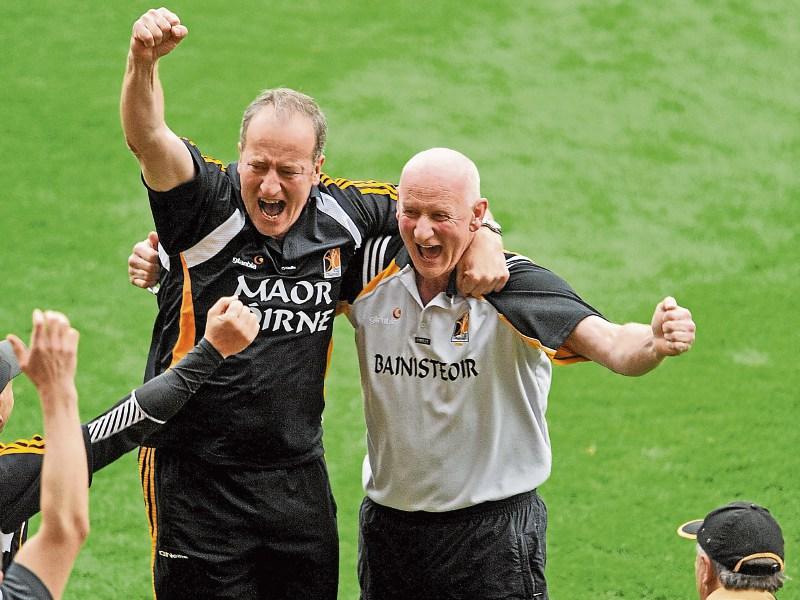 Manager Brian Cody and selector/conditioning coach Michael Dempsey are the dynamic duo who did most to shape Kilkenny’s golden path in hurling in recent times.

The pair have been working together on the backroom team since 2005. In that time the county won eight All-Irelands, six National Leagues and nine Leinster championships.

Others came and went and did invaluable work as selectors during what has been the county’s most successful run in history since Cody first took over as manager in 1999. However, Cody and Dempsey have shared more success than any other combination.

“Brian has a really sharp eye for a player,” insisted Jackie Tyrrell, who has shared in the glory run since 2003 and has so far harvested nine All-Ireland winners medals.

“Michael gives us a lot of personal time, and he shapes the training specific to the player,” he added.

“Between them they have things down to a tee.”

Tyrrell was speaking at the promotion of a new Vanilla flavoured Avonmore Protein milk when the subject of how things operated in the Kilkenny camp came up.

One wondered was Cody now building his third new team.

“I would say it is probably his fourth team,” suggested Tyrrell casually. “There was a team there when he came. Then there was another team in 2006.

“Then another one came along in 2010 and ’11. Kilkenny are constantly evolving, and it appears almost seamlessly.

“It is only when you stand back you think ‘God, there is actually a new team there’. It was after the ’14 final that I actually realised the massive turn over of players there had been.

“There was a new half-back line of Padraig Walsh, Kieran Joyce and Cillian Buckley. They came almost from nowhere.

“You are thinking, ‘he is after putting in a new team innocence to us’. He just does that. New guys integrate into the system so well.”

The clubs, Tyrrell insisted, play an integral part in the process and the management set-up at club level was serious. Clubs funnel talent into the system, and the players are at “a good level already” when they move on.

“Brian obviously sees something in lads,” continued Tyrrell, a James Stephens club colleague of the manager.

“He brings lads into the extended panel and helps their further development. The club network is huge though, and the County Board is very well run too.”

He felt the club/inter-county mix was nicely balanced in Kilkenny, with players allowed back to their clubs at various times during the season. From what the players hear, clubs in other counties might not see their inter-county players for months.

“Brian has a really sharp eye for a player,” insisted Jackie, a four times All-Star winner. “Sometimes he might pick a lad who might not appear to be the best of hurlers, but he sees something in him. He must be thinking I can do something with him, or something like that.

“There are so, so many examples of that down the years. He brings lads in and nurses them through the extended squad.

“You can’t force a guy to do anything. If you force a guy, he is doing something for the wrong reason.

“He brings a lad in and he is watched closely. He watches the development, mental and physical. Then he can throw him different challenges and see how he reacts.

“Then you can say yeah, we can do something with this lad. He is a great man manager.”

He said the process could be slow, because the body needed to be able for it.

“Training is at such a pitch, your body needs to be strong,” Tyrrell offered. “Some guys can be ready. It can take others a year or two to get to the level required. It is different for everyone.

“Brian obviously has the expertise of Michael Dempsey for the strength and conditioning side of things to get these guys ready. Michael gives us a lot of personal time and he gears things specific to the individual player.

“Different players might needed an emphasis on different things. He knows exactly what each individual requires.

“We are not killed in training. Training is intense and that, but it is not four or five days of the week. When we train, we train tough, but they are good at getting the balance of training and freshness right. And getting the intensity right.”

Kilkenny all the time think big, about victories, days in Croke Park and finals, he insisted, and that wasn’t because they were losing the run of themselves.

“This is where our standard is at,” Tyrrell insisted. “That is not being big-headed. That is where we feel we should be.

“That is why we train so hard, to give ourselves a chance of meeting these goals.

“The days of competing again the best, of expressing yourself to the maximum of your ability, that is where the buzz comes from. If you haven’t got that buzz, you shouldn’t be there.

“If you are happy enough to play in low key games, fair enough. That is your level. But with this group that is where our level is at now.

“It has the drug effect. You want more when you get it. How you get it after you finish I don’t know. You will have to find something to replace it. But right now it is a drug I am pursuing.”

The Cats will be chasing a third success on the trot in the Leinster final against Galway in Croke Park on Sunday. Beyond that who knows, but there is the possibility of chasing the All-Ireland three in-a-row too.

The one black mark on the Cats season to date was the flop against Clare in the National League semi-final, but all in the camp have left that well behind them.

Tyrrell, who started that match but retired with a muscle strain after 20 minutes, felt that was a once-off. On the day Clare were at a higher pitch; their body language and attitude were way beyond the ordinary in the League.

“They had a championship feel about them, and we weren’t at that level,” he thought.

“They were on breaking ball like dogs. We were second to the ball. If you are second in this game you will be blown away. They did that to us.”

That showing and result disappointed, but it didn’t impact in any way on Kilkenny’s future preparations. They simply got on with life, the way they do.

“We have standards and we demand them of each other,” Tyrrell said.

“If a lad doesn’t do what he should, he will know about it. You have to have that. If someone is allowed slacken that can seep through the team.

“That won’t be allowed happen in Kilkenny,” he assured.