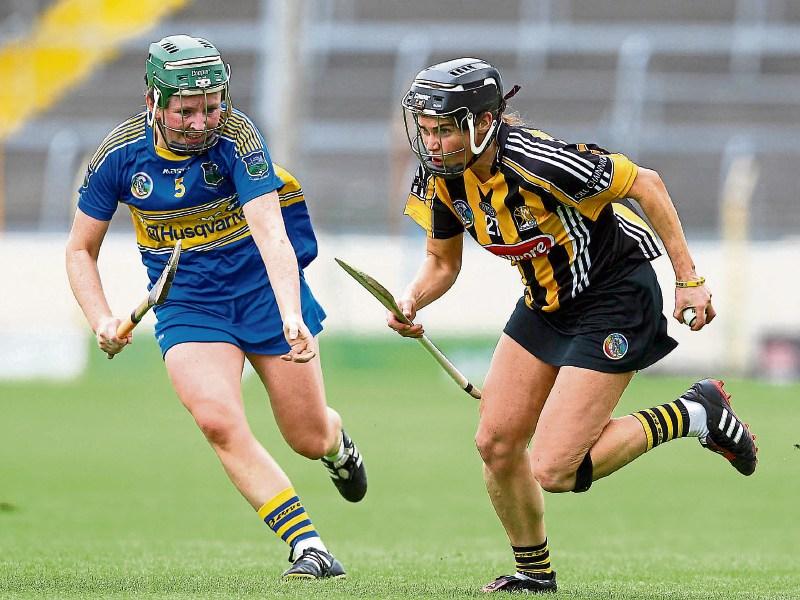 The Kilkenny senior camogie team made it three wins from three when they proved much too strong for Tipperary in the All-Ireland championship in Semple Stadium on Saturday.

The victors opened well and scored through Ann Dalton early on. Nicole Walsh responded for Tipperary with a pointed free before the visitors went on a devastating scoring run.

They landed 1-5 without reply. Julieann Malone started the run with a point from 35 meters.

Ann Dalton continued the good run when she got in for the game’s only goal 30 seconds later. She gained possession 45 metres out and tore through the rearguard before coolly dispatch the sliotar to the net.

Michelle Quilty then tapped over a point before Katie Power did likewise. Ann Dalton added to the gains from the sideline in the 12th minute before Denise Gaule shot a well taken point.

Nicole Walsh stopped the rot when she hit back for a Tipperary point.

Kilkenny just roared on. Denise Gaule landed a minor from 45 metres after racing on to a Katie Power pass. Michelle Quilty chipped over a point to keep the momentum strong.

Credit to Tipperary, they hung on grimly. They hit back for four points per Sarah Fryday, Nicole Walsh (2 frees) and Fryday again.

The visitors barely blinked. Katie Power finished a strong run by shooting a point after reacting quickest to an Ann Dalton free that was saved by Tipperary keeper, Sabrina Larkin.

Denise Gaule slipped over a free from 45 metres before Tipperary closed out the first half scoring with an excellent long range point from Nicole Walsh.

The winners continued their good run in the new half. They reeled off four points through Denise Gaule, Katie Power, Julieann Malone and Gaule again as they sent out a firm message that they weren’t going to let up.

The losers bounced back and nabbed three points on the spin. Nicole Walsh started the run with a free from 21 metres.

Orla O’Dwyer added to the gains before Miriam Campion sent over a well taken point in the 47th minute.

The Tipperary fight-back was short lived. Sharp Kilkenny out-scored them by seven points to one during the closing 12 minutes.

Denise Gaule started the run. Katie Power and Ann Dalton added to it before Shelly Farrell got in on the scoring act with a point.

Player of the game

Ann Dalton, who was picked as the player of the match, then slipped over her fourth point when she charged on to a Michelle Quilty pass.

The contest was well and truly over, and the mustard keen Cats had completed the hat trick of victories.

In what is a repeat of the League final, the winners will secure a place in the All-Ireland semi-finals.

In other camogie news, the Kilkenny intermediate team began their All-Ireland series with an impressive 5-18 to 0-11-point victory over Tipperary in Danesfort, also on Saturday.

The victors raced out of the traps and enjoyed a 3-8 to 0-6 half time lead.

Jenny Clifford, Angela Kenneally and team captain Aine Fahy all found the net in that half.

Kilkenny didn’t take the foot off the pedal. They rattled the net twice more through Angela Kenneally - an absolute bullet to the roof of the net - and Sarah Walsh to ease home by 5-18 to 0-11.

The winners now face a tricky away assignment on Saturday against Antrim.

The Kilkenny A side secured the title after they proved too strong for Wexford (2-8 to 1-1).

The B side enjoyed a 1-2 to 0-2 victory after a tight tussle with Laois to secure the title.