Stars galore as vicious Cats dig out title No. 71 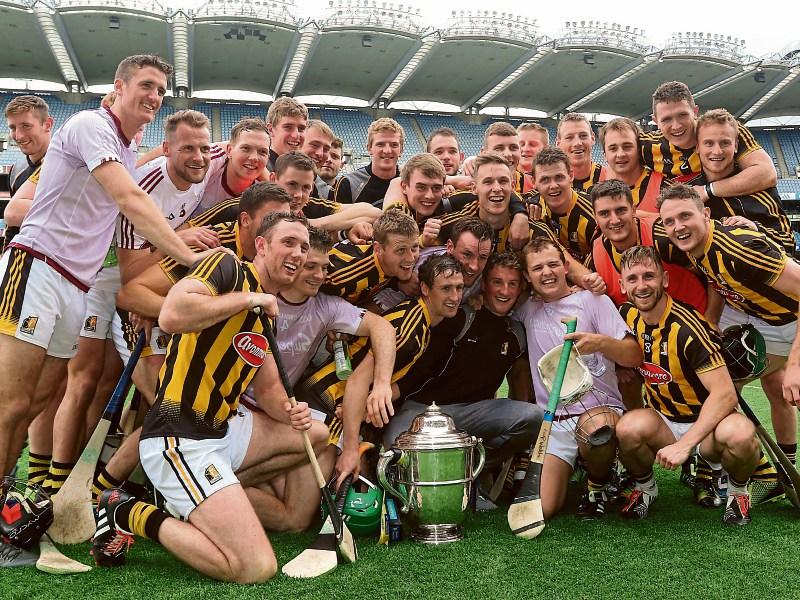 It would be easy to package it as a ‘Plan B’ success, but that would be to under value the effort in its entirety. Credit all round.

Croke Park didn’t rock and heave with excitement as it has many a day in the past, but defending champions, Kilkenny, and challengers Galway produced a Leinster senior hurling final that was as tough and demanding and as good as anything seen in the championship this season.

In the end the Cats completed the hat trick of titles when they beat Galway by 1-26 to 0-22 and earned the ticket into the All-Ireland semi-finals on Sunday, August 7, thereby keeping the three in-a-row option on ‘Liam’ wide open.

“That was tough, real tough,” suggested one of the stars of this torrid Sunday afternoon test, Conor Fogarty. “Galway were good, very good, and it took a magnificent united effort to beat them.”

The Tribesmen shot the first score through Joseph Cooney, and while the scores were level twice afterwards, they generally pushed the pace.

At one stage they were five points to the good (0-12 to 0-7) without ever having out-hurled the opposition to any great degree.

While there was always a serious threat in their play, the body language wasn’t convincing and didn’t speak of self belief.

Defiant Kilkenny hauled back the deficit to three points at the break (0-13 to 0-10). Then from the start of the new half they chartered a different course when former Hurler of the Year, Richie Hogan and John Power were sprung from the bench.

Some might refer to the introductions as ‘Plan B’, but circumstances demanded changes to shake things up. Kilkenny had shown plenty of threat up front, but the end product just wasn’t there.

The switches changed that.

Things began to happen quickly for the All-Ireland champions.

Hogan scored with his first touch, when he gathered a delivery from his Danesfort club colleague, Paul Murphy on the right wing at the Canal End. A quick look at the posts. Missile launch. Point.

Kilkenny and Hogan, who shook off a hand and muscle injury to play, were up and running. The Cats, growling and clawing all over the park, hunting down the opposition at every turn, won the second half scoring exchanges by a convincing 1-16 to 0-9.

On the face of it a comfortable win. Figures distort the truth. Victory was hard earned, very hard earned.

“We knew what Galway would throw at us,” insisted Kilkenny manager, Brian Cody. “They are a very good team, and we will hear a lot more from them in the All-Ireland series.”

Kilkenny will have good and bad to review when the game is dissected. The defence, in its entirety, was magnificent.

A quiet success was the fearless showing of new corner-back, Robert Lennon in his first Leinster final, especially during the opening half.

Okay, his man stole a pair of points, but Lennon was always positive and sure when attacking the ball, and he used possession well.

Galway catered for their big men during a lot of the first half when pumping high ball forward, but Lennon’s 14th minute leap into the sky to make a striking catch was one of the best plays of the opening half.

Anothers big plus here was the good showing of full-back, Joey Holden. A few tough outings in the ’League may have dented his confidence, but he was strong here. Two great catches late in the match were the deeds of a man in a good place with his game.

The other four defenders were simply terrific, and goalie Eoin Murphy oozed confidence behind them.

Paul Murphy found himself alone on many an occasion during the first half. Why teams leave him free to clean up amazes.

He hurts the opposition from a deep position.

Padraig Walsh decorated an already glittering season with another top class display. His frightening pace and athleticism, like his colleague on the other wing, Cillilan Buckley, contributed hugely to the Kilkenny success story these times.

They were simply terrific, aided especially during the first half, it must be said, by the strength of the showings of the men immediately behind them.

In between them Kieran Joyce was efficiency personified - never rushed, never under pressure, always in control.

Over the 70 minutes, the defence won this day for Kilkenny.

Conor Fogarty was powerful in midfield, or wherever his labours took him. He can create. He can score. He can defend.

This day he ignited midfield.

Team captain, Lester Ryan, made a deadly serious contribution too, and he looked more on the pace of things than he did in the previous game against Dublin.

That was important as you look down the road towards August, and possibly September.

The two big ticket winners in attack were Jonjo Farrell and Richie Hogan, who knitted the front line together from full-forward from the off in the second half. Farrell made the best of everything that came his way. His instinct and option taking were of the highest order.

Hogan plundered five points from play. If it wasn’t a king’s ransom in real terms, it was rich pickings for a team in need of a cutting edge.

He was a game changer.

Galway, with John Hanbury, Daithi Burke, David Burke, Cathal Mannion and Conor Whelan, now and again, pushing the cause with most dynamism, virtually went score for score with the opposition during the opening 20 minute. Yet, they could have been well behind.

By that time the Cats had threatened their goal seriously on two occasions.

In the 10th minute Colin Fennelly sent a screamer across the face of goal and wide after a great, angled cross field ball from Eoin Larkin created the opening.

Then on 17 minutes Lester Ryan was at the end of a super move involving Colin and Michael Fennelly, but when he pressed the trigger he aimed the bullet at the midriff of goalie Colm Callanan.

A good save resulted in a 65 which was pointed by T.J. Reid.

Those near things were typical of Kilkenny at the time. They looked capable of getting scores easier than the opposition, but there wasn’t always an end product to good approach play and promise.

And so they reached half-time 0-10 to 0-13 behind, having one time trailed by five points. There was something missing.

The energy and effort were there, but despite the odd spark, the team effort just didn’t ignite.

Until, that is, the introduction of Richie Hogan. He stoked the fires. He pointed with his first touch after less than 30 seconds.

Joe Canning (free) replied before Conor Fogarty, picked out by Cillian Buckley around mifield because there were no options for delivery when he look up field, hit back.

Hogan delivered again before Galway hit back at the double through Conor Cooney to show 0-16 to 0-13 in front on 44 minutes.

The equaliser followed 20 seconds further on. The Kilkenny puck-out was worked up the field. Conor Fogarty went on a great run.

A good block by Ryan helped engineer a lovely lead point for T.J. Reid on 45 minutes. Hogan weighed in with another point to follow. Ditto John Power.

The Kilkenny goal had a narrow escape in the 49th minute.

The towering Cyril Donnellan batted a high ball from the right edge of the square towards the target. Cillian Buckley swiped the ball away with a one handed effort.

Cathal Mannion salvaged a point when the reward could have been greater (1-17 to 0-17).

On a day of several close calls and game direction changers, that was a big one. During the following minutes Galway slipped over points through Joe Canning and Conor Whelan to cut the deficit to the minimum (1-17 to 0-19).

Kilkenny held their ground. A clever, low in-field pass from Padraig Walsh to Michael Fennelly ended with the latter shooting a point. T.J. Reid added to the gains.

Farrell added a double, first after a powerful run by Fennelly and then after taking a pass from Reid.

Galway’s chance in Leinster was gone.