Calm and confident, Eoin is Ever-ready for European challenge 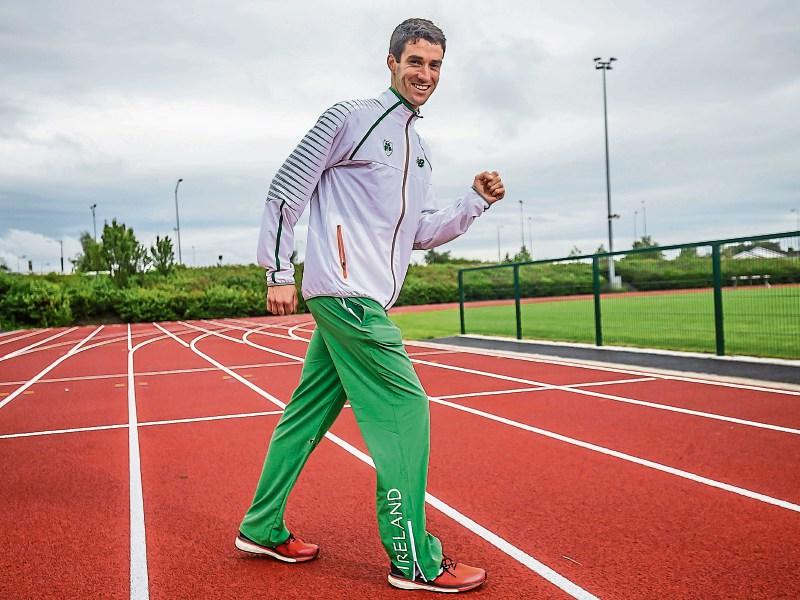 It may seem strange for someone involved in running circles, but the patient approach has paid off in spades for Eoin Everard.

The Kilkenny City Harriers athlete is in the form of his life and proved as much when he earned his place in the Irish side which will compete at the European Championships in the Netherlands this week.

For Everard, who will compete in the 1,500m event, making the national team is the pinnacle of a career which he almost gave up on.

“It’s funny,” he said. “Four years ago, when I was 26, I spent a year trying to go for this standard and it never worked - I barely made the nationals, nevermind the European championships. After that I went to do my Masters and thought about giving up athletics. Now, four years later, here I am going to my first Europeans.

“You never know what’ll happen,” he said with a smile. “If you keep persisting, eventually it pays off. Getting the call-up is testament to that.”

Claiming that place in the Irish side was no easy task, however. Everard travelled across the continent in search of that qualifying time, so much so he’s become something of an expert in European life!

“I’m pretty sure I could take up residence in Belgium,” he said with a laugh. “I’ve been there about five or six times. I’ve been to Nijimegen, Brussels, Namur and I’ve literally seen every little village along the way.

“I’ve also been in the Netherlands and Amsterdam in particular - that was a popular venue as that’s where the European Championships will be held. I went to Prague as well, where I ran the standard for this year. It’s a nice opportunity to see these places, but you do get sick of going to the airport after a while.”

Everard put his name in the hat for national selection after getting inside the Irish B standard time of 3.40.5. He ran 3.40.2

“I was delighted with that - I have the fastest time in Ireland by about five seconds,” he said. “Two years ago I didn’t make the Europeans. I ran an A standard time but so did a number of other Irish athletes. Among those were Paul Robinson, finished fourth in the 2014 final in Zurich while Ciaran O’Lionard was spiked in the final and had to drop out - he had been in the Olympics and finished 10th in the World Championships before that.

“Having four others achieve the standard time was strange,” said Everard. “Usually you might only have one qualifier, but two years ago there were five of us! When it came to this year’s team I remember thinking that if I got in with the B time that I’d probably deserve it having made the A standard last time and not going.”

It was a real blow for Everard to miss out on the 2014 games, especially after achieving the qualification time.

“You have it in your head that ‘if I get this time I’ll be going’,” he said. “Then, when you get it, it just so happens that several others get it as well! It was a shoot-out, and I came fourth in the nationals that year - it was just bad luck that two athletes couldn’t go and I was one of them.”

Missing out led to a spell of soul-searching for the athlete - but it was brief.

“You start to think ‘was that my big chance?’,” he said. “You’ve built again and now you’re 28 years old, but if you keep going you never know when it’s going to come right.”

There is a real air of positivity in Everard’s tone when he speaks. As someone whose career has blossomed in latter years, he is grateful for everything which has come his way.

“A lot of people get their best time in running when they’re younger but they don’t get to appreciate it,” he said. “They don’t have the chance to enjoy the sport or simply being fit and healthy.

“It’s nice that my best running is coming to me later in my career. I can really appreciate going to these places and enjoying these races. I see it in my physiotherapy work - no matter what level you’re at it’s great if you can set out a goal and achieve it, whether it’s a 5K run or qualifying for the European championships.”

Taking an easier approach to running has paid off.

“Four years ago I was going to give up, but I took things a little less seriously for a while,” he said. “I kept tipping away with it, then after getting a bit fitter things started to go right. Since then I’ve won four national titles, broke the four-minute mile and qualified for the European Championships” he said.

“The amount of things I could have missed out on had I given up back then. Thank God I stayed going - you never know when things are going to come right for you.”

Earning his Irish call-up is proof of that. It also proved to be a perfect Sunday evening tonic for Everard. Earlier that day he lost his national senior 1,500m crown after finishing second to John Travers.

“I was gutted with the result from the final,” he said. “I had been the favourite going into the race but sometimes that’s the way it goes with the 1,500m. The race went really slow, up until the last 200m.

“There was one guy ahead of me but I passed him with about 110m to go,” he said, recalling the race. “I was out in front, into the wind, but he (Travers) passed me at the very end.

“You’re always frustrated with a race like that - you think ‘if I had been a bit quicker I would have won that race’. I went home after the race but, that night, I texted one of the national team selectors and asked whether there was any word on the team.

“He asked if I had checked my email, which I thought sounded very promising, so when I checked that I found I was in. I was delighted - I spent hours on the phone to people afterwards, but it was well worth it.”

With the European Championships now just days away Everard is using his pre-race time wisely, getting some physio and relaxing before his big race. He has targets in mind for the first heat, which will be held from 5.20pm on Thursday, with the final down for decision on Sunday.

“Ireland set their own A standard - the B standard time I made is actually the European standard, so I’m going there to compete against people who have run the same time as me,” he said.

“It’s going to be hard to make a European final, but the good thing is that the 1,500m event is only a semi-final and then a final - if you get into the right heat with the right type of people you could definitely do it.”

And that relaxed confident outlook has given Everard every hope of posting a big time in Amsterdam.

“I’m feeling good,” he said. “The one thing you can’t determine is how a guy in Denmark or Spain is going run, but I’m feeling good - I think that’s going to make a big difference.

“I feel like I’m in the best shape of my life so I’m not going to be holding back when I get in there,” he said. “I won’t be lacking confidence when it comes to giving my best and, on the day, I think I could make the final.”