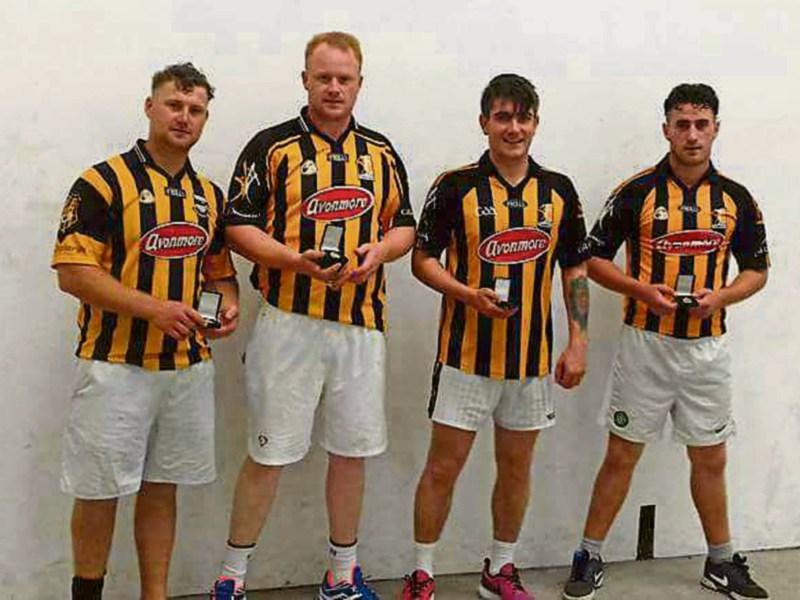 There was joy for St Patrick’s handball club at the weekend when their junior ‘B’ team of four won the All-Ireland title.

They continued this good form when beating Waterford and Galway opposition on Saturday at Ballymore Eustace.

In the semi-finals against Friary/Abbeyside from Waterford, the Kilkenny team of Michael Conville, Paddy Delaney, Stephen Fitzpatrick and Stephen O’Reilly came out on top, 84-39.

And in the final against Loughrea (Galway), the daring St Pat’s lads were comfortable 125-25 winners.

This was a great win for the progressive Kilkenny city club which only came into existence at the start of this year.

In the Leinster championships, almost all entrants have played a match at this stage, and there is plenty of action in all grades.

There was a good win recorded by Shane Dunne (Clogh) and Dion Bourke (Mothel) in their minor doubles clash.

In the under-21 grade, Padraig Cooney (Clogh) lost in two sets to the impressive Galen O’Riordan (Wexford)

The county One Wall championships are scheduled for Windgap on Sunday with matches due to start at 10.30am.

Championships will be played in the following grades - men’s Open, men’s B, men’s C, Masters A, Masters B, Masters C and ladies.

The format of the competition will be decide by the number of entries.

This Saturday Kilkenny Handball Board are holding an under-13 ‘B’ doubles tournament aimed at encouraging more players to play 60x30 handball.

This tournament is sponsored by Kilkenny GAA Board and will take place in a group format at courts around the county.

The 60x30 Nationals will be held in Kilkenny/ Carlow/Wexford and Tipperary venues on the weekend of July 23 and 24.

Fixtures are now available on the GAA Handball website.