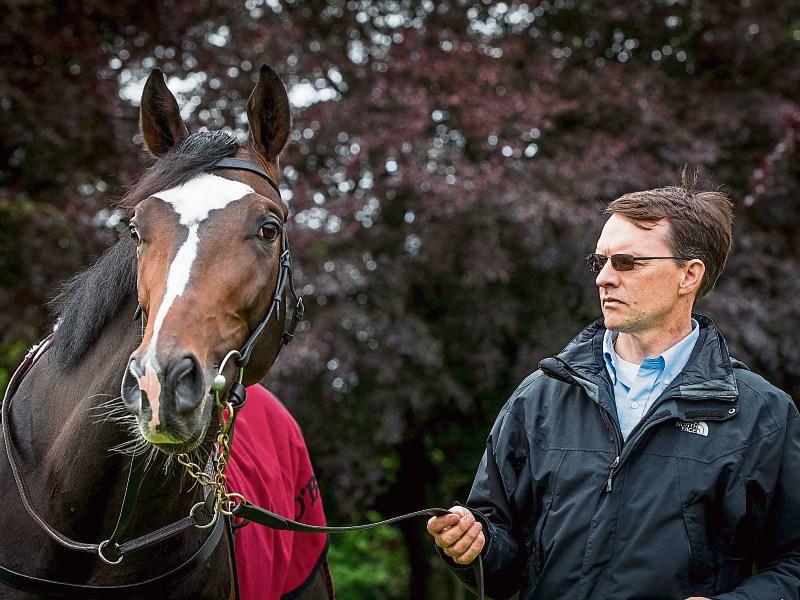 The Seamus Heffernan-ridden Seventh Heaven gave Aidan O’Brien his first home Classic of the year when easily winning the Darley Irish Oaks at the Curragh on Saturday.

The 14/1 led early inside the final furlong to beat British raiders Architecture and Harlequeen in grand style, giving Heffernan his first success in the race and O’Brien his fifth.

The visitors had earlier enjoyed better fortune when 5/4 favourite Mecca’s Angel ran out the impressive winner of the Group 2 Kilfrush Stud Sapphire Stakes for trainer Michael Dodds and Paul Mulrennan.

The successful rider landed a second winner when the Mick Easterby-trained 16/1 shot Perfect Pasture landed the Scurry Handicap by two lengths from Master Speaker. The Ladies Derby went to the Helen Mooney-ridden Zeftan who scored a runaway nine length victory for local trainer Adrian Keatley at odds of 14/1.

There were 13/2 winners of the opening two races as Arcada took the 7f maiden for Joseph O’Brien and his brother, Donnacha while David Simmonson partnered Sabrina Harty’s Have A Nice Day to win the handicap over the same distance.

While out of luck in the feature event, Ryan Moore got among the winners as 3/1 chance Peace Envoy took the Group 3 Anglesey Stakes for Aidan O’Brien.

Gordon Lord Byron added to his big-race haul when landing the Friarstown Stud Minstrel Stakes, run as a Group 2 for the first time, at the Curragh on Sunday.

Tom Hogan’s star, already the winner of three Group 1 races in Australia, France and Britain, was sent off at 16/1 under Billy Lee but ran out a ready winner from cross-channel raider Sovereign Debt.

The Group 2 Kilboy Estate Stakes went to 4/1 chance Bocca Baciata, trained by Jessica Harrington and ridden by Colm O’Donoghue and the successful four-year-old could have targets in America, Canada and France ahead of her. Racing began with a narrow victory for the Ger Lyons-trained Velveteen who scored at odds of 9/2 under Colin Keane.

Aidan O’Brien and Ryan Moore captured the first two-year-old handicap of the season when 15/8 favourite Istan landed the 6f nursery and 5/4 shot Rose De Pierre was another winning favourite as she won the 8f handicap for Dermot Weld and Pat Smullen.

The Corinthian Challenge Charity Race was won by the Johnny Feane-trained Vivat Rex. Alice Kavanagh was the successful rider.

Trainer Joseph O’Brien is hoping that King Leon can sneak into the TheTote.com Galway Plate on Wednesday week after his ready success in the featured handicap chase at Tipperary on Sunday.

Ridden by Mark Walsh, deputising for the injured Barry Geraghty, the 11/4 joint-favourite overcame an early mistake to beat Coldstonesober by two and a quarter lengths. Marinero, the 2/1 favourite, made a winning start for Henry de Bromhead when landing the 3m conditions’ hurdle in the hands of David Mullins who replaced the injured Bryan Cooper.

Another successful market leader was Lord Fendale who landed the maiden hurdle for Cavan trainer Shane Donohoe and Andrew Lynch.

Sent off the 13/8 favourite, Supreme Vic added to her win at Killarney on Thursday evening when easily taking the handicap chase for Gort handler Norman Lee and Jack Kennedy. Castlelyons trainer Edmond Kent teamed up with Mark Flanagan to win the opportunity handicap hurdle with 7/1 shot Star Counsel while 6/1 chance Dundrum Lad won the beginners’ chase for Mags Mullins and Niall Madden.

Rachael Blackmore continues in fine form and she was among the winners again at Kilbeggan on Friday evening. She took the 3m handicap hurdle on 9/2 joint-favourite Oisin James who is trained in Cloyne by Denise O’Shea.

It got worse for punters as the Stuart Crawford-trained Chitu landed the 2m handicap hurdle at odds of 50/1 under Andrew Lynch while even money favourite Daisy’s Gift was a faller in the beginners’ chase that was won by the Gordon Elliott-trained 6/1 chance Cecil Corbett who was ridden by Keith Donoghue.

At the same price, Noel Meade’s Tulsa Jack landed the featured Midlands National Handicap Chase under Jonathan Moore while the Damian Skehan-ridden 11/4 shot Wilms Warrior was another winner for Thurles trainer Andy Slattery in the bumper.

The Edward O’Grady-trained Time For Mabel may take his chance in the Guinness Galway Hurdle after his strong performance in winning the 2m1f handicap hurdle on the final day of the Killarney’s July festival on Thursday.

Andrew Lynch brought the 6/1 shot home a comfortable winner from Cliff House and certainly would not look out of place in Ireland’s richest National Hunt race. The earlier handicap hurdle over the same distance was won in similar fashion by the Willie Mullins-trained King’s Wharf who justified good market support to win at odds of 11/2 under Ruby Walsh.

Trained by her brother, Joseph, Arya Tara was reeling off her fourth win in a row as she held off the late surge of Avenante to win at odds of 6/4 favourite. O’Brien had earlier partnered the Paul Deegan-trained Three Majors to win the 7f apprentice handicap, the win coming a little over 24 hours after the 7/1 shot had finished fifth over an extended mile at Killarney.

Jim Bolger won the first four races at the previous meeting at the course but he had to settle for a double this time. He won the 7f maiden with 6/5 favourite Seville Star and followed up with Mainicin, an 8/1 chance, in the concluding 10f handicap.

Aidan O’Brien and his son Donnacha took the opening 6f maiden with evens favourite Sportsmanship while 7/2 chance Intern made a winning start and landed the gamble of the night for David Wachman and Wayne Lordan in the 7f median auction maiden.