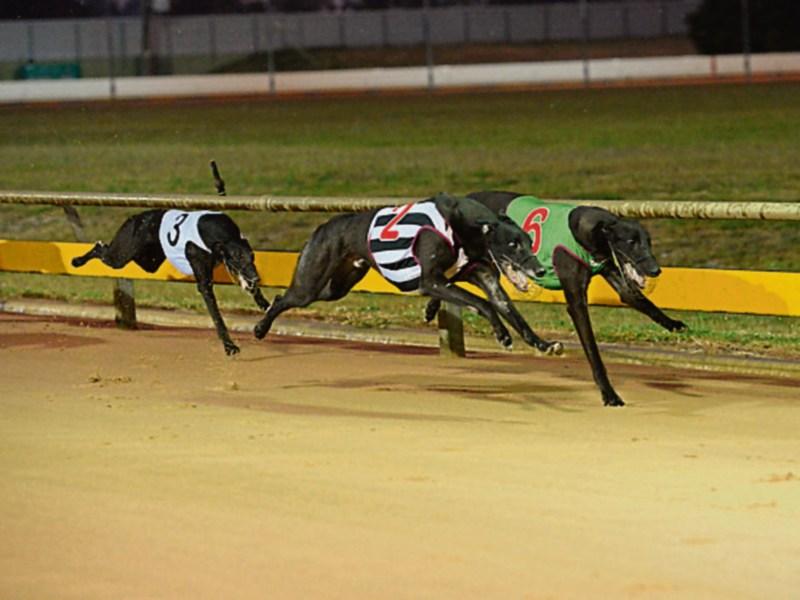 As is the norm over the years, a massive crowd turned up.

The 11 race card featured eight finals. One of the notable features of the racing was the amount of early pace to the bend in most of them and the high standard of competition throughout the card.

The most striking performance came in the Frightful Flash A1 final. HolyCross Super ran in trap 2.

Trap 1 Doctor Zhivago was an almost unbackable 1/2 favourite. It was a level break, but Super took over going into the bend and led from the jolly.

Around the second he opened up and down the back straight went six lengths clear. He kept up a relentless gallop and came home three and a half lengths clear of Doctor Zhivago in a fabulous 28.78.

Race one was the Kilcarrig Quarries Open SSO 300 final. Coris Share was the even money favourite and he was a most impressive. He was not for catching.

He gave a very impressive display, winning by three and a half lengths from Starbucks Jack in a time of 16.38.

In the McDonnell Clan final (A7 525) there was an upset. The punters sent Angel Holly away the even favourite.

From a level break Angel Holly cut inwards and was impeded whilst on the inner Rathkyle Katie got a clear run and quickly led into the first.

There was a lot of trouble behind the leader at the first and as a result she quickly shot in to a 10 length lead down the back straight.

Not noted for her staying power, she won by three and a half lengths from Old Road Teddy, who ran on strongly to take second place in a time of 29.72.

Race three was the Peter Meaney memorial. The reserve Ballygur Rumble was smart away, but on the run to the bend it was quickly passed by the evens favourite Sapa Express, who just got clear going into the first bend.

The Express opened the gap down the back straight from Swirling Stream and the second favourite Jolly Boozer.

This was the order turning from home, but up the straight Jolly Boozer found another gear and challenged strongly on the line.

Sapa Express held on to win by a head from Jolly Boozer in 29.19.

In the Hedgehunters novice 725 final, the punters got stuck in to trap 6 Chubbys Sarah and backed her in from 4/6 on to 1/2 on. She gave an impressive performance.

She opened up a six length gap by the third bend and was well clear. Of the remainder Musical Pearl made some inroads turning for home.

These two were way clear of the pack and Chubby’s was four lengths too good in 40.57. This was one of the best runs for quite some time over the 725 in Kilkenny.

Race five was the Kilkenny Limestone Quarry A3 525 final.

Barefoot Boss was the 6/4 favourite. It was a level break and run to the bend, but halfway to the bend Karlow Melody asserted and Bull Run Joe asserted and went around together.

There was trouble behind when Power Dragon was knocked. Out of the second Karlow went on and opened a two and a half length lead.

On the run home he ran on very strongly to win by seven lengths in 29.21. This was a very popular win for local Henry Kelly.

In the Dobbs Oil N1 525 final there was a level break. Kellymount Cian and Garryglass Champ led early and into the bend.

Garryglass took it up and opened a two and a half length gap out of the second bend. This was a lead he was never to relinquish and although Lord Brandy, the 4/6 odds on favourite tried hard, the Champ was still three lengths clear at the line in an excellent 28.93.

In the Black and Amber Kennels A3 525 final the betting had Olympic Gorgeous going off at 6/4 favourite.

However, there was a surprise at traprise when the 4/1 shot Clonduff Jet hit the lid and posted a fast sectional to give himself a solo.

In the Connolly’s Red Mills Open 525 cup, Lenson Sanchez went off the evens favourite with Mucho Macho Man the only other one considered by the punters as second favourite.

It was the complete outsider Good News John at 20/1 who used his customary early pace and also his knowledge of the track to lead up. He led around the first from Sanchez and Macho Man.

Into the third Sanchez was on his tail, but John dug deep and held the fast finishing Sanchez by a neck in a time of 29.06.

Race 10 was the Hi-Spec Engineering Open 725. Here Jaytee Patriot was sent off the 4/5 favourite.

At traprise Rosmult Martha made a quick exit and up the front straight Martha led by three lengths from Maggies Lucy.

They stayed that way until the final bend when Maggies Lucy took over with the fast finishing Morning Music also counting on the inside.

The result showed Maggies Lucy a three quarter lengths winner from Morning Music with the long time leader Rosmult Martha a further head away in third in a time of 40.96.

Race 11 was the William Fry solicitors A1 525. Here two counted in the betting, Jaytee Valencia at 6/4 and Starbucks Star at 7/4. They had contrasting fortunes.

The unlucky Jaytee Valencia was baulked at the first and suffered an injury, whereas Star flew away from the outside and cleared the first bend. He went two and a half lengths clear of Ballybough Mondo down the back straight.

He never relinquished the lead, winning by two lengths from Mondo in a time of 29.07 to bring a highly successful night to a conclusion.