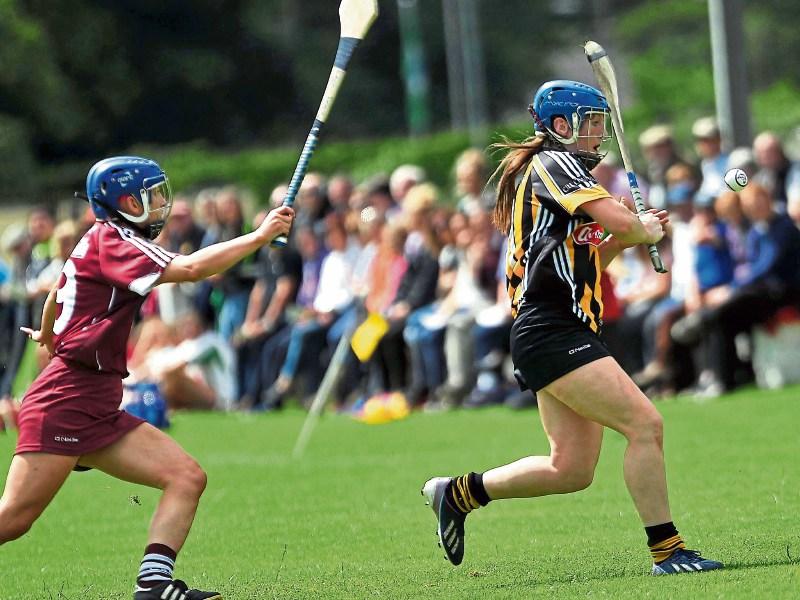 A gallant second half by Galway, inspired by an Ailish O’Reilly goal, made all the difference when the visitors won 1-12 to 0-10 to finish top of the group.

This was a repeat of the senior Camogie League final in Freshford on Saturday. The defeat was Kilkenny’s first in Group 2 and it meant they missed out on automatic qualification for the All-Ireland semi-finals.

Bearing in mind Kilkenny’s previous good form, the result was a bit of a disappointment.

Denise Gaule pointed a free after 30 seconds to open the scoring.

Galway responded with a brace of points through Niamh McGrath (frees), the second from 20 metres in the seventh minute after Orlaith McGrath was fouled.

Kilkenny hit back with three points on the bounce. Denise Gaule started the run with a brace of points.

The first was a massive score from 60 metres. Then she tapped over a free.

There were a barren patch in the contest before Miriam Walsh broke the deadlock when she slipped over a point to make it 0-4 to 0-2.

Shauna Healy responded just before the break for Galway when she grabbed a point from 20 metres to cut the deficit at the break to 0-4 (K) to 0-3.

Kilkenny would have being disappointed not to have been further ahead because they missed some good chances.

The losers began the second half well and got in for the opening score from Anna Farrell in the opening minute.

Ailish O’Reilly then got in for the game’s only goal in the 38th minute. She picked up possession 45 metres out, cut through the home cover before hand passing the ball home from the edge of the small square.

Niamh Kilkenny added a well taken point from 45 metres to shoot Galway 1-5 to 0-5 ahead.

Galway were awarded a penalty in the 46th minute. Rebecca Hennelly took it, but her well struck shot was brilliantly saved on the line by Kilkenny net minder, Emma Kavanagh.

She followed up with a well taken point from 30 metres before Ann Marie Starr got herself on the scoreboard with a point.

Orlaith McGrath added to the gains before goal scorer Ailish O’Reilly shot a point from 21 metres (1-10 to 0-8).

Denise Gaule stopped the rot for Kilkenny when she drilled over a testing free in the 55th minute.

Galway clinched victory when they shot a further brace of points.

Noreen Coen grabbed the first one from 35 metres in the 56th minute before Niamh McGrath hit over her sixth point with time almost up.

Denise Gaule closed out the games, scoring with a free for Kilkenny in the first minute of injury time. It was too little too late as Galway claimed victory.

Galway now head the group in front of Kilkenny. The group winners progress through to the All-Ireland semi-finals along with Cork.

Kilkenny, who finished second in the group, will now face Offaly on July 30 with Tipperary and Wexford making up the other quarter-final.

Time and venue to be confirmed.