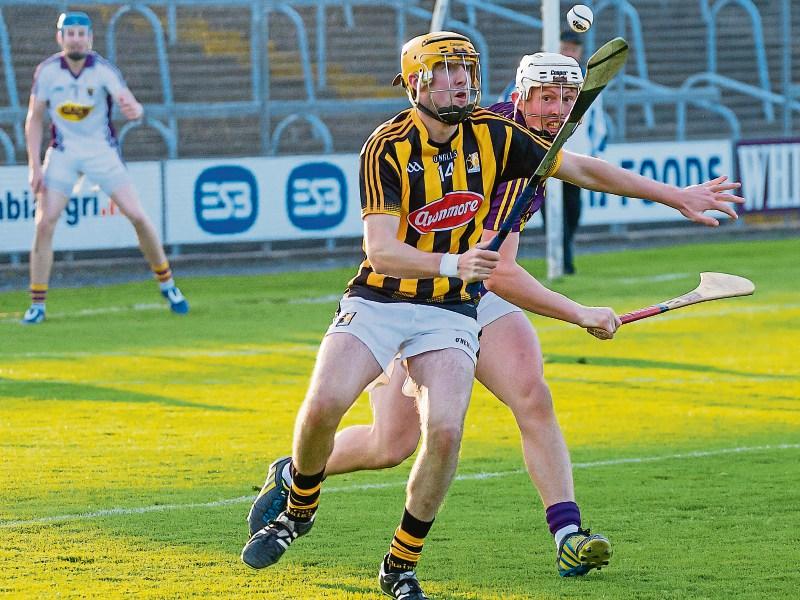 A cool and calm performance, delivered in the white-hot heat of battle, saw the Kilkenny intermediate hurlers rise to the challenge and lift the Leinster crown.

As any team wearing black and amber will testify, taking on Wexford in their own backyard is never easy. Doing so while chasing a six-point gap with time against you doubly so!

Yet Pat O’Grady’s men showed composure and strength to overcome the odds, beating Wexford by 3-14 to 2-14, and storm their way to a 15th provincial title - a first since 2012.

After a see-saw game, the silverware seemed to be slipping away from Kilkenny when their hosts plundered a second goal to open up that six-point gap with less than 20 minutes remaining.

Storming forward after Danny Martin Carroll’s point attempt fell short, the Wexford full-forward line rushed netminder Kevin Nolan as he caught the dropping sliotar. He managed to dodge the first challenge, but was hooked by Nicky Kirwan as he tried to clear his lines.

When the ball broke loose Jack Pettitt pounced, finishing to an empty net. Wexford were now 2-12 to 2-6 in front - Kilkenny were in trouble.

However, that’s when the Cats took decisive action. O’Grady and his selectors made the hard calls, shuffling their pack. Aaron Duggan was introduced to the fray, strengthening the Kilkenny defence as they started to mount a comeback.

Slowly, the Cats began to claw their way back into the game, Mark Bergin (free) and Conor Tobin shaving points off the deficit.

They went within a whisker of slicing the gap down to the minimum when Billy Ryan broke through the Wexford defence and bore down on goal, but his menacing 47th minute drive whistled past the wrong side of the right post.

Wexford regained a little composure when John Doyle restored a point to his side’s lead, but the room the Model forwards had enjoyed was beginning to dry up as the Kilkenny backs, led by Luke Hickey, Jack McGrath and Jason Cleere, fought and snapped for every ball.

Driving play back towards their own attack, the belief spread in the Kilkenny ranks. Bergin led the charge, sniping two more points before sub Richie Leahy burst in to obliterate Wexford’s advantage.

The all-important equaliser came with a sweeping move that cut Wexford open. Jeff Brennan got them going from midfield, linking up well with Billy Ryan before Bergin’s lay-off saw Leahy storm through to blast an unstoppable 52nd minute shot past Darragh Hughes.

Wexford were reeling, but Kilkenny weren’t finished yet!

The strong finish was a little at odds with how the evening began in Wexford, as both sides tepidly broke into the game.

As their manager had stated in the build-up Kilkenny needed a few minutes to ease their way into championship fare. This was their first competitive game of the year and it showed, as they took some time to shake off the rust.

The opening stages were tame enough, the sides sharing the first four points equally, but Kilkenny seemed to spark into the life when they plundered the opening goal on nine minutes.

John Walsh, who impressed throughout, was the creative force as he pinged a ball from the right corner across the face of the square. Mark Bergin read the delivery, slipped into a gap between two backs and fired home at the second attempt.

With a strong breeze behind them it seemed that Kilkenny would open up and drive away from here but they spluttered along. A growing tally of wides didn’t help their cause; neither did the mounting number of frees conceded, something that allowed Tommy Dwyer to keep Wexford in close contention as the half wore on.

Wexford’s recovery was also helped by a lively full-forward line. Ryan Mahon, Jack Pettitt and Nicky Kirwan played a big role, contributing first half points as they fought back into the game.

Still, neither side took a firm grip on proceedings. It looked like parity would reign after Dwyer and Pettitt cancelled out minor scores from Kilkenny’s John Walsh and busy midfielder Jack Langton, but a fifth Dwyer free in injury-time edged the Model men into a narrow lead at the break (0-10 to 1-6).

Wexford came out full of fire for the second half and were quick to make their momentum count. Within 60 seconds the Kilkenny net shook.

When a wind-assisted puck-out dropped inside the 25m line Wexford swarmed forward. Kilkenny tried to win possession but, when the sliotar spilled loose, Nicky Kirwan emerged from the scrum to bundle the ball home.

That was a real blow for Kilkenny, who were forced to play the second half without injured captain Nicky Cleere. However, they rebounded in spectacular style, Billy Ryan shooting the Cats right back into the reckoning when he gathered Shane Donnelly’s 35th minute pass and sped away to ram the sliotar past ’keeper Hughes.

The Wexford response was swift as, helped by some Kilkenny fouls, they opened up a three-point lead with another Tommy Dwyer brace before Kirwan’s goal saw them rocket six points in front.

Things looked ominous for the Cats as the game ticked towards the final quarter but they weren’t done for, as Leahy’s late goal saw them surge back into contention.

Wexford did creep ahead again, Nicky Kirwan mining a good point, but Kilkenny weren’t about to let their momentum cool. Two points in a flash from Leahy and Conor Tobin pushed them in front before John Walsh and Shane Donnelly swelled the winning margin in stoppage time.

Billy Ryan (Kilkenny) maintains his focus as he keeps his eye on the sliotar during the Intermediate Leinster Final in Wexford Park. Photo: Pat Moore