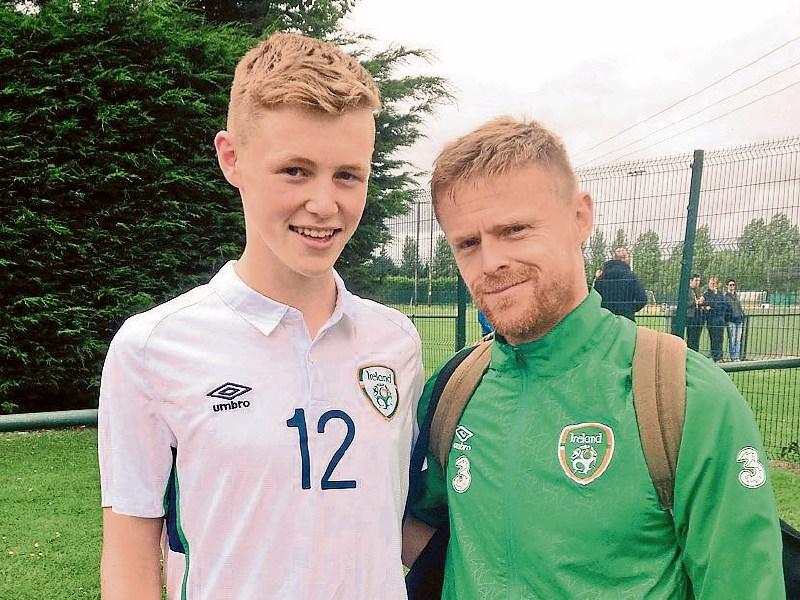 A series of impressive performances at this year’s Kennedy Cup have earned Kilkenny’s Padraic Moylan an international call-up.

Freebooters player Moylan (pictured here with Damien Duff) has been named in the Republic of Ireland under-15 squad for the Hibernia Trophy tournament.

The Irish team will play Club Northern Ireland, Ipswich Town, Sunderland and Wolves at the tournament, which will be hosted by St Joseph’s Boys AFC at their Pearse Park venue from August 19 to 21.

“What we’re trying to do is to get the players involved in the learning environment to prepare them for international football going forward,” said Irish head coach Jason Donohue.

“For some of the players it could be their first time going away with a group, outside of the Kennedy Cup. We’ll teach them about elements of being involved in an international squad such as nutrition, rest and recovery.

“With so many games we’ll look at everybody and the schedule will be testing for the players.

“We’ve picked players with versatility and will see them in a variety of positions.

“We’ve selected a squad for the Hibernia Trophy only from players who played in the SFAI Kennedy Cup this summer. We’ve had two assessment days where we had 60 players in. We also played the Irish under-16s and will have three training sessions ahead of the tournament.”

Moylan earned his shot after he and his Kilkenny & District League team-mates won the Bowl competition at this year’s Kennedy Cup in Limerick. Together with Conor Power, Jackson Oyo and Fred Odera he was selected to compete at international trials before being selected for the Hibernia Cup. He is the latest in a line of Kilkenny players to play in the competition, joining the likes of Aidan Tuohy, Ciaran Brennan and Elvis Azah in representing their League on the international stage.