hurling The Michael Fennelly interview from the Sure media day 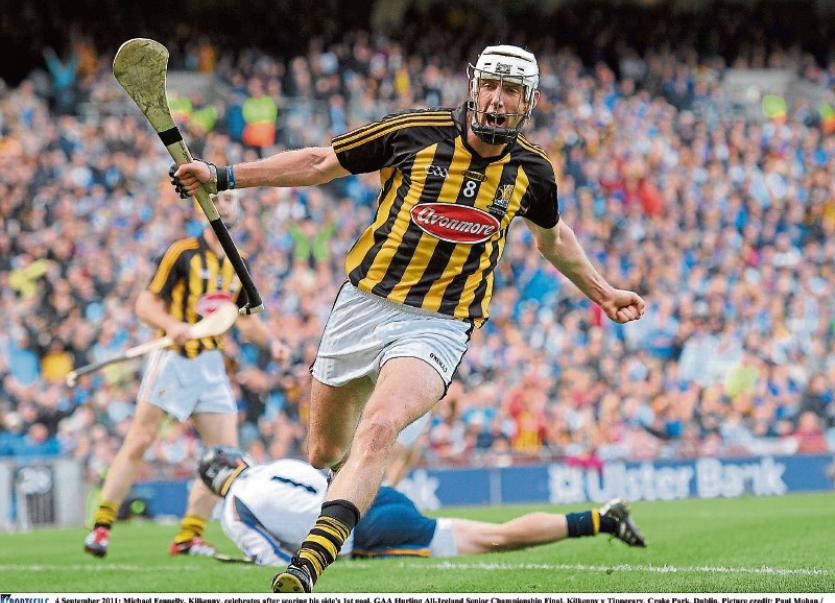 Kilkenny star, Michael Fennelly, will literally be having a chat with himself in early 2017.

Only then will he know for sure whether or not he will be able to continue what has been a glittering inter-county career to date.

The powerfully built Ballyhale Shamrocks player won’t need any medical opinion or advice from any source when it comes to making the big decision.

“My body will tell me,” he said of the options facing him, and which he reckoned he will only be in a position to face around February or March of the new year.

This week the 31-year-old had surgery to correct the ruptured Achilles tendon of his left ankle which he suffered in the frenetic All-Ireland hurling semi-final replay win over Waterford.

He faces a harsh Winter and months of recovery and rehabilitation.

Fennelly’s area of expertise is in sport, health and fitness so he has some idea of the tough journey that lies ahead.

And bearing in mind a background that includes some serious injuries suffered in the past, he is ruling nothing in and nothing out.

One step at a time

Retirement was not on the agenda he insisted initially when on a media day as a Sure GAA ambassador on Friday. However, when he thought about it, he felt it might be wiser not to be so bold.

“Retirement may have crossed my mind at the time I got the injury, and for an hour or two after it because I was very upset and emotional,” the current All-Star and former Hurler of the Year (2011) told the ’People.

“The thinking now is about the operation and the effort to get myself right. In February or March hopefully I will be in good condition.

“My body and how it feels will tell me where I can go. We will cross that bridge at that stage.”

He said the Achilles tendon injury wasn’t the only consideration in the equation.

There were “a lot more issues”, including his back which has given him trouble for years.

After picking up the Achilles injury the eight-time senior All-Ireland medal winner was in a dark place, knowing his season was over and he was going to miss the All-Ireland final against Tipperary and the rest of the year with his beloved Ballyhale Shamrocks.

“I got my head around it now in terms of what has to be done,” he explained when we spoke on Friday.

“I have the operation on Monday. There is no point in feeling sorry for yourself. That is a waste of time.

“I will have the operation and then try and do my bit to get a good performance from all on All-Ireland final day. I have to be strong for myself and the panel.

“There is no point in me being lonely or feeling out of place.

“That is not the case. This is not an individual sport. It is a team sport. I am out of the final. That is it. It happens to players.”

He mentioned that Ger Aylward (Glenmore) missed the entire season with a cruciate ligament injury.

Henry Shefflin and Michael Rice were crucified by injuries during their careers too.

“You have to get on with it; put your feelings to the side to help the Kilkenny cause,” he said with conviction. “That is the important thing now. There is an All-Ireland to be won.”

Fennelly said he was still part of the Kilkenny panel, of the effort to win this All-Ireland.

“I have made a contribution up to this,” he reminded. “I am in a difficult place, and it will be difficult. I am not playing.

“You cannot do anything to help the team on the field during the 70 or so minutes that matter. That is very frustrating.

“The lead up to the game, I feel, will be fine. You don’t miss a lot there. You miss training, but on the day, and even after it, I am sure it won’t be a nice feeling to be in the position I am in.

“I reckon, win or lose, I might want to go home after the game, but I am part of the panel and there are duties to be performed.”

The ankle was encased in plaster of Paris after the operation and will remain so for weeks.

That will be the most inconvenient time in the recovery, but during the eight weeks in a surgical boot that will follow his movement will be less restricted.

“There are people in worse situations than me,” was Michael’s observation of what lies ahead.

“I am not naive,” he continued. “Sometimes your body is just not able to keep going.

“Any decision in that area is a long way down the track. I won’t be making any decision until I am back healthy and back in the swing of thing as normal next year.”

The first thing, he insisted, he had to do was to get his body back in good shape bearing in mind the rest of his life. Then he would look at sport.

He reminded he has a bit of background in this area of sport and fitness, as he lectures on both. He was not a physio or a doctor or anything like that, but he had a fair idea of what was involved.

“That might make things a bit easier,” he suggested. “I have dealt with injuries before. It is a matter of getting things right.”

He revealed that he felt twinges in the ankle during the drawn semi-final against Waterford. Looking back on things he wondered did he suffer a strain in that game.

He was particularly mindful of the problem during the second half.

“You can feel these things, but you try and push them into the back of your mind,” Michael said.

He explained the ankle was very sore during the week leading up to the replay, but thought it would settle down. When he did the warm up before the match he put the matter out of his mind and got on with business.

Then in the 59th minute as he charged up the field from the Town End goal, disaster struck. There was a ‘twinge’, like an elastic breaking.

The feeling was something popped in the ankle, he recalled.

“I knew I was in trouble straight away,” he admitted. “I knew it was the Achilles. I went over on my ankle badly twice before in 2012 and 2013. It was severe pain at the time on both occasions, and both of those were three month jobs.”

That Saturday was a black night. That moment when he was stricken in pain on the ground; the time spent in the medical and dressing rooms “wasn’t nice”.

“The thought struck that I probably won’t be playing in the All-Ireland final,” he said with sadness in his voice.

“That was hard. I just wanted to get home, but look, what can you do? It will take time and I have to get on with it.

“This will test me physically and mentally. My body has suffered over the last few years. This is a big, big tendon, a strong tendon. It is quite a serious injury.

“It will be a test to see can I come back as strong as ever. The previous injuries don’t help.”

He was up for the battle, he insisted.

“The challenge is to get back,” Michael said. “Every player is always eager to get back and see can you have another stab at it.”

He knows he would get every support from Kilkenny manager, Brian Cody, the selectors, medical team and County Board. Brian, he insisted, has always been ultra supportive of injured players.

He insisted that management have always been very good to him, tailoring his training to suit his individual needs. He was often taken out of training when it was necessary and allowed work on his own.

“That was massively important for me,” he insisted. “If that hadn’t been the case, I wouldn’t be playing now.

“That’s a fact. I am fortunate in that the management team, including Michael Dempsey, who is a massive help, have been very patient with me.”

The players too, he reminded. There were never questions asked when he was following his own training routine away from the others.

“The lads have been very understanding,” he insisted. “That leeway they gave me has helped drag more out of my career. I know they will be on my side again.”

Now that he was destined to miss the club season with the Shamrocks was “a nightmare”. The club enjoyed a decent enough season so far after last year not going so well, and all were gearing up for a big effort in the championship.

“I was looking forward to that, but now there is nothing,” he said. “That’s not easy to take.”

Michael is working hard to remain upbeat and positive. He is still part of Kilkenny’s bid for All-Ireland title No. 37.

“I don’t know how many big games we have played against Tipp since around 2009 - finals, semi-finals, League finals, extra time and replay in 2014,” he said when looking forward to the big showdown on September 4.

“Fingers crossed our lads perform. If they perform, the scoreline will look after itself. We need a massive performance against Tipp. They are an excellent side.

“Despite the gloom I am looking forward to the lads performing. Once they perform I would be happy. Tipp are going in a small bit under the radar in that they didn’t perform as well as the might have against Galway in their semi-final.

“Sometimes that can be a good way to go into a final as well, knowing you have to up your game. We know the form we showed against Waterford on both days was probably not good enough to win the final.

“We need to up that to a new level,” he concluded.

Cian O'Connor of Ireland riding Kilkenny during the jumping individual final at the Equestrian Park during the 2020 Tokyo Summer Olympic Games in Tokyo, Japan.

Gardaí issue warning about some car sellers tampering with mileage