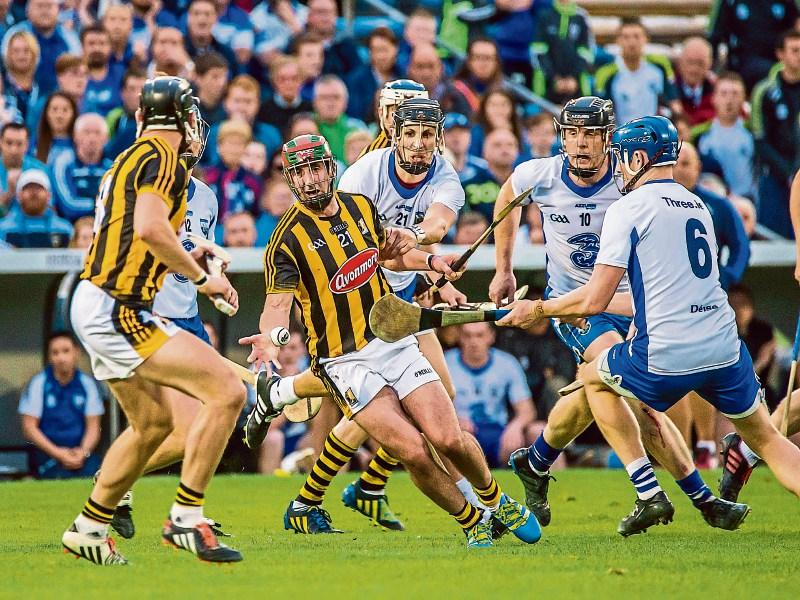 The demands of the Kilkenny media day are many in the build-up to the All-Ireland, but for Eoin Larkin there’s nowhere else he’d rather be.

“It’s part and parcel of things,” he said. “I think you’d be more devastated if you weren’t doing it at this time of year.”

These events are second nature now for Larkin - Sunday will be his 10th time to contest an All-Ireland final - but he and his team-mates never take these things for granted.

“You enjoy doing it,” he said. “The be-all and end-all of the hurling year is to be in that final and then, when you get there, you want to win it. That’s all what we’re trying to do.”

And that day is coming flying into view. For the Village man, the 2016 campaign has had a ‘blink and you’ll miss it’ feel to it.

“It’s hard to believe the All-Ireland final is only around the corner and that the inter-county year is nearly over,” he said. “It feels like only yesterday that we were preparing for Galway and last year’s final, training in Fota Island. So much has been packed into a 12-month period that it’s all a blur, but when you’re doing something you love time just flies.”

Larkin’s post-season was very different to many of his colleagues. His job with the Army meant he spent months on a peace-keeping tour of duty with the UN in Syria, but that afforded him time to reflect.

“It wasn’t nice for the people who are going through it,” he said of his experience. “It was a break away from hurling and everything. It gave me time to see where I wanted to go and focus the mind, but I’m happy to be home.”

Although keen to get back into things, Larkin didn’t feature for the Cats during the League. The role of spectator was tough going at times, but added fuel to his fire.

“It was certainly was tough, trying to get back up to the pace of things, but it was added motivation for me too,” he said. “I knew I could get back there - it was a matter of putting my head down, working hard and seeing where it took me.

“The most important thing was that I believed I could get back there,” he added. “I believed it from the time I came home. I knew it wouldn’t just happen - it took me longer than I expected, but good things come to those who wait.”

And getting back came thanks to help from Mick Dempsey, whose tailor-made training has been a real boost for Kilkenny.

“He’s a huge asset for the players,” Larkin said of the Kilkenny selector and trainer. “You see a lot of coaches going in and flogging teams until they can’t go anymore, whereas Mick is the total opposite - he’s almost telling you to take a rest when you feel you don’t need one! You feel you have to fight with him to train! He’s a top class coach, something he’s proven with us over the last number of years. He’s had us bang on for the big days.”

Dempsey has certainly had his work cut out in this year’s championship. Teams have tested Kilkenny’s physical limits, not least Waterford in those two epic clashes.

“There were a lot of sore bodies the day after the drawn All-Ireland semi-final,” he said. “Mick got us back into the shape at training that Tuesday night. Top marks have to go to him for helping us give a performance like we did that Saturday in the replay. Everyone in the panel believes in him and his techniques, which is huge.”

That work, and more, saw Kilkenny deliver nothing short of an intense performance in the replay.

“The work Mick did with us helped our bodies recover, but it was down to the players to get our minds right,” he said. “We reviewed how we had performed in the draw and what we could do better. Everyone who played that game resolved to do one or two things better the next day - over the team that average helped us give a better performance.”

Larkin was one of three changes to the team that started the replay in Thurles. He was joined by Mark Bergin and Liam Blanchfield, players who gave an exceptional performance in their senior debuts, but their display was nothing new to their established colleague.

“We’ve always said we have a good panel,” he said. “People mightn’t have seen much of the lads with the senior panel, but we see them every night in training and knew what they could do. Thankfully, when they went out on a big day with everyone watching, they were able to do it again.”

And those players will have to give a repeat performance when they take on old foes Tipperary on Sunday.

“We’ve had a good few battles over the last number of years,” Larkin added. “We’ll have to produce another good performance again.

“Tipp were impressive in their win over Galway; they didn’t play as well as they would have liked, but they ground out the win. In previous years Tipp might have lost that game - they showed serious resolve to get through. They’ve shown they're hard to beat. It’s a trait of a good team, something which will give them huge confidence for Sunday.”