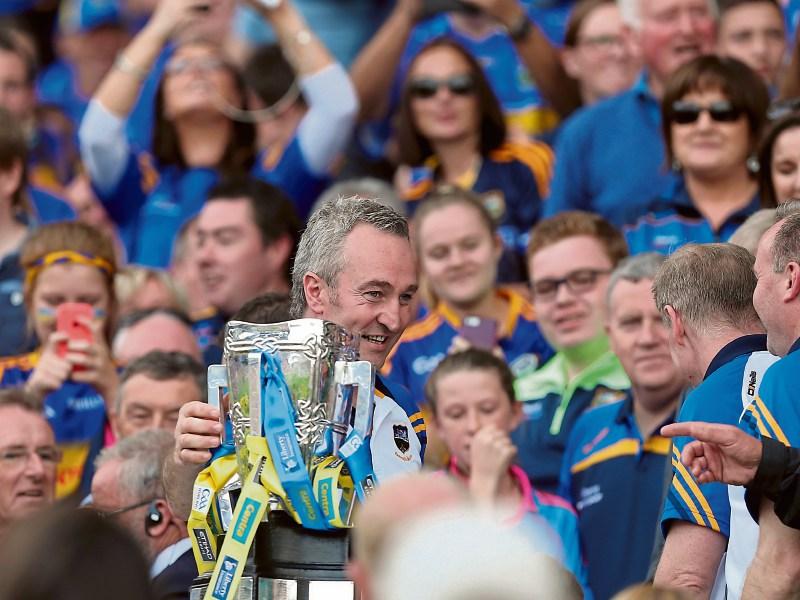 Kilkenny’s vice-like grip on the MacCarthy Cup may not have gone down well in some parts of the country but, for Tipp hurling manager Michael Ryan, the Cats simply raised the bar for what was needed to be an All-Ireland champion.

“That’s just a tribute to where Kilkenny have taken their game for the last 10, 12 years. There would’ve been a far greater share of the spoils for every other county if Kilkenny hadn’t been as dominant as they were. I wouldn’t beat myself up, or any previous Tipp team, for that.

“We certainly weren’t happy about it, but we have to keep believing and keep doing the right things,” he added. “What we saw out there was testament to that - we never stopped believing that we were on the right track and these boys would pass those tests when asked.”

Managers often talk about the hurt of previous defeats as being a springboard for future success - not Ryan.

“You can’t live your life looking over your shoulder,” he said. “Today was a brand new day. It was there to be played.

“Sometimes history can be a burden,” he added. “You have to put it in its place. Take what you can from it, learn from it and confine it to history after that. I think we had four or five debutants out there, playing their first All-Ireland final. Those guys have opened a whole new chapter for themselves. They’ll relish the chance to come back and do something again in 2017.”

There has been a noticeable change in the Tipp ranks since Ryan took charge. Captain Brendan Maher said as much before the game, highlighting how the competition for places has led to a greater intensity in the panel. That energy carried into the final, with the team exploding into life from the off.

“With the nip and tuck nature of the game I felt we were right up there from the start,” he said. “There was nothing in it for so long but, at half-time, we felt the vital period of the game was yet to come.

“Kilkenny have that knack of lifting the intensity and forcing you to make errors,” he added. “For us that didn’t materialise - at no stage did I feel we were out of it. If anything their first goal helped our guys to refocus.”

It was, he agreed, the type of performance needed to beat Kilkenny.

“It felt like we were never out of it,” he said. “Kilkenny came back and got some great scores - the second goal was an outstanding goal - but our guys were never behind for any length of time. We kept the scoreboard moving quite regularly and, when we got our noses in front we kept daylight between the teams.

“It felt like a phenomenal second half,” he added. “The intensity levels were really good, with end to end hurling. I felt our guys had great composure and showed great skill and focus throughout.”

A number of Tipp’s scores came from pressurising the Kilkenny defence, forcing them to cough up possession and leak scores. It wasn’t rocket science, the Tipp manager reckoned, just hard work.

“This is what we call intensity these days, isn’t it?” he said. “Putting that kind of pressure on backs isn’t revolutionary; it’s about our forwards working hard.

“It’s what every team in the country sets out to do, but we seemed to get to the pitch of it more today. The work-rate was fantastic and there are some great hard-workers in that forward line. To a man they all contributed.”

Neither was it a deliberate tactic to use goalkeeper Darren Gleeson’s puck-outs as a type of aerial bombardment. As far as Ryan was concerned, that move appeared as the game flowed on.

“It’s a live show,” he said of how the game evolves. “The form our players were in and the effort they made to get to the ball was phenomenal.

“It wasn’t cut and dried - we didn’t tell Darren to hit every ball long. I know this came up again after the Munster final, but it wasn’t deliberate. The game evolves and you trust your goalkeeper to make good decisions and he did just that.”

The last time Ryan was in Croke Park on All-Ireland final day was as part of Eamon O’Shea’s backroom team. He had strong praise for his former mentor who, he reckoned, played his part in this success.

“Eamon and I are great friends and will always be,” the manager said.

“We soldiered together with Liam (Sheedy’s) regime for years and when he came knocking in 2012 to put a squad together I had no hesitation in coming on board. We were all devastated that we didn’t achieve anything as a group with him. He remains a great friend to our group.

“His influence was seen out there,” Ryan added. “He would have been thrilled with that work-rate and the skill that was on show - it was straight out of the Eamon O’Shea book of hurling.”