A thriller, but no decision 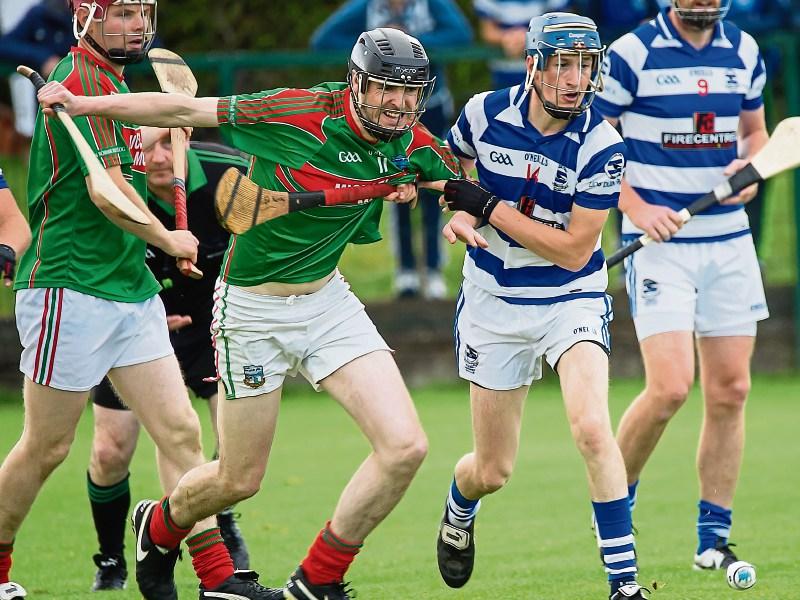 The Rower-Inistioge and Lisdowney served up a thriller in the county junior ‘A’ hurling final in Clara on Saturday.

Under foot conditions were difficult, and with a wind which couldn’t make up its mind which team to favour, spectators had no right to expect the epic encounter which unfolded.

Not even extra time could separate the two teams.

Lisdowney started in blistering fashion. Niall Kenny found Paddy Bowden, who stole behind the Rower defence and finished to the net after only seconds.

Kevin Murphy got the Rower off the mark with a clever pick-up and finish from 30 metres. He added a second from the right shortly afterwards (0-2 to 1-0).

Brian Kavanagh got his first point for Lisdowney before James Cassin slotted over two (one play, one free) for the Rower (0-4 to 1-1). The same duo exchanged pointed frees before the Rower struck for a goal on 19 minutes.

Jack Walsh delivered a clever hand-pass to Conor Lyng, who fed Kevin Murphy to finish. However, Lisdowney replied brilliantly with points from Willie Kenny and a monster score from centre-back Joe Bergin (1-5 to 1-4).

The Southerners weren’t to be outdone. They grabbed the next three points, a great score from the excellent Kevin Murphy sandwiched between two frees from James Cassin to open up a four point lead, 1-8 to 1-4.

Brian Kavanagh (free) and Jack Walsh traded points to leave the score 1-9 to 1-5 in favour of the Southerners at half time.

Brian Kavanagh (L) opened the scoring in the second half with two quick fire frees. Edward Kenny cut Inistioge’s lead to one after taking a great pass from Willie Kenny, 1-9 to 1-8.

Points from David Lyng, Kevin Murphy and James Cassin (free) pushed the lead back out to four, 1-12 to 1-8 after 41 minutes.

Paddy Bowden and Laurence O’Carroll pointed for Lisdowney before Eoin Delahunty raced through the centre, finding Niall Kenny, who finished low to the net to edge Lisdowney 1-12 to 2-10 ahead.

Given the run of play it was no surprise when the Rower hit back with three points from play, two from James Cassin and an excellent score from John James Kenny nudging them back in front, 1-15 to 2-10.

Niall Kenny (L) pointed before Diarmuid O’Brien, who had just entered the fray, responded in kind (1-16 to 2-11). The Rower grabbed what appeared to be the decisive score when James Cassin was released by John James Kenny’s quick hands to finish high to the roof of the net after 55 minutes, 2-16 to 2-11.

Just when the Rower looked set to win their first junior ‘A’ title since an Eddie Keher inspired win in 1987, Niall Kenny hit a low crossfield lineball which found Eoin Delahunty in space.

He bagged a goal. Edward Kenny pointed on 62 minutes with the end nearing. Joe Bergin sent the game to extra time when he leveller on 63 minutes, 2-17 to 3-14.

Niall Kenny and Kevin Murphy traded points before Brian Kavanagh closed out the first half of extra time with a point. Lisdowney led by 2-20 to 3-18.

John James Kenny scored immediately after the rest to tie up the game, 2-21 to 3-18.

Brian Kavanagh pointed a 65 into the teeth of the wind 13 minutes in. However, the Rower wouldn’t accept defeat and a great score from Jack Walsh from midfield ensured another instalment awaits.

The only disappointment of the evening was what looked to be a nasty leg injury for Lisdowney midfielder Peter Bergin.